Ride-sharing, also known as carpool, vanpool, dynamic ride-sharing, and instant ride-sharing, is a mode of traveling in which a single ride is shared by more than one anonymous passengers traveling along the same route. This method comprises picking different passengers from different places and ferrying them to same or different destinations. Ride-sharing is an old concept that has penetrated in the market since 1907. In the early 20th century, the method was known as ride sourcing in which the location of vehicles was unknown. Faster network speed, Global Positioning System (GPS), and smartphones have changed the face of the global ride-sharing industry, which enabled users to book a ride whenever they want and knowing the exact location of the vehicle, which in turn has enhanced the safety of passengers.

The global ride sharing market is primarily driven by the inability to own a vehicle predominantly among mid- and lower-income group population. Asia Pacific and Latin America account for a significantly lower number of vehicles per 1000 persons. Ride-sharing offers the users a sense of owning a vehicle at a much lower cost than owning one. Therefore, consumers are preferring ride-sharing services. High volatility in fuel prices, rising traffic congestion, increasing working class population demands for daily commute in urban areas of major countries, supplemented by limited provision of public transit support in some countries and supportive government initiatives for expansion of ride-sharing activities are fueling the global ride-sharing market. Additionally, factors such as rise in daily commute to work places in urban areas and increased need to save fuel, which is wasted in such congestions, by providing a ride to commuters and colleagues heading along the same route are anticipated to fuel the global ride-sharing market. 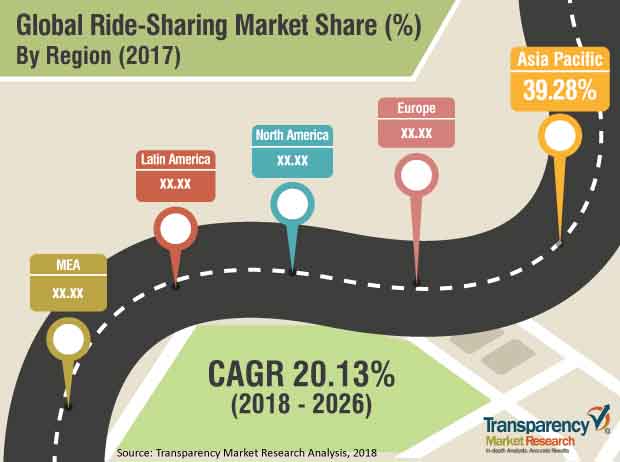 Increase in pollution coupled with increasing global temperature is prompting governing bodies to reduce emission occurring through the transportation vehicles. Governing bodies across several cities of the U.S. and Europe have established separate lanes on major highways, known as commuter lanes, to be used by vehicles containing two or more number of passengers. In several cities across the U.S., vehicles occupying more than three passengers, known as high occupancy vehicles, are exempted from tolls across cities. Initiatives taken by governing bodies are focused on reduction of traffic in order to reduce pollution. Lower cost of traveling, as compared to the cost of owning a vehicle and hailing a vehicle, elimination of need to drive, and easy availability at the touch of a button are key factors attracting consumers toward ride-sharing services.

The global ride-sharing market is witnessing a key restraint from taxi operators. Ride-sharing apps are gaining popularity among consumers, which in turn is hampering the local taxi business. Consequently, taxi operators are opposing ride-sharing services in several countries, such as Japan. Safety of passengers sharing the ride is a factor of prime importance. Recently, in China, cases have been reported in which the driver murdered a young female passenger. Such incidents are threatening the safety of passengers, which in turn is restraining the ride-sharing industry.

Expansion of major auto manufacturers is likely to offer lucrative opportunities for the global ride-sharing market. Global automakers are emphasizing on the deployment of autonomous and electric vehicle fleets across the ride-sharing and ride hailing industry, which is expected to reduce the traveling cost for shared rides, prominently. Autonomous vehicles are being tested for their safety and efficiency. Uber Technologies Inc. has partnered with the Volvo Group in order to add 24,000 autonomous vehicles into its fleet in the near future. China is witnessing a surge in adoption of electric vehicles. Ride-sharing firms across China have a significantly higher number of electric vehicles in their fleets.

Ride-sharing is highly popular for traveling within city limits. Consumers prefer ride-sharing services for traveling to public transportation nodes such as railway station, airport, and bus station, as well for shopping, parties, restaurants, and for visiting relatives and friends. Therefore, the intra-city segment of the market accounted for a major share of the market, in terms of revenue, in 2017. Distance is a key factor that influences customers while preferring ride-sharing services. In Europe, where the average distance between major cities is much smaller, the Ride-sharing for intercity travel is gaining popularity.

Global auto manufacturers are expanding their footprint across the ride-sharing industry. Increase in adoption by consumers, improved demand, and higher revenues are attracting auto manufacturers to penetrate into the ride-sharing industry. Several auto manufacturers such as General Motors, Volkswagen Group, Toyota, Daimler AG, and BMW have entered the global ride-sharing market, either by acquiring small ride-sharing firms or by forming strategic alliances with them. In March 2018, Daimler AG acquired Germany-based car rental startup Car2Go. In 2016, General Motors announced a new car sharing service, named Maven. The OEM segment of the market is predicted to expand at a significant pace due to the increase in merger, acquisition, and joint venture activities by OEMs. Private ride-sharing companies are dominating the market. Globally, leading ride-sharing firms, such as Uber, Didi, and Grab, are focused on expanding there footprint across developing countries by acquisition of small, local, ride-sharing companies.

Asia Pacific comprises rapidly developing countries such as China and India. Demand for ride-sharing and ride-hailing services is at its peak across these nations and is expected to surge in the near future. Presence of leading global service providers, significantly lower number of vehicles per 1000 people, lower GDP per capita, and flexible laws by governments are propelling the ride-sharing market across the region. Asia Pacific accounted for about 40% of global market, in terms of revenue, in 2017. Latin America and Africa have significantly lower number of vehicles per 1000 people; hence, the demand for ride-sharing and hailing activities is rising across these regions. Expansion of key global players across Latin America and Middle East & Africa and merger and acquisition activities witnessed in these regions are expected to fuel the of ride-sharing market in these regions.

The report comprises a detailed value chain analysis, which provides a comprehensive view of the global ride-sharing market. The Porter’s Five Forces model for the market has also been included to help understand the competitive landscape in the market. The study encompasses market attractiveness analysis, wherein the service is benchmarked based on market size, growth rate, and general market share.

The study provides a decisive view of the global ride-sharing market by segmenting it in terms of commuting distance, service provider, vehicle type, autonomy level, operating body, electric vehicle type, business model, and geography. These segments have been analyzed based on present and future trends. Regional segmentation includes the current and forecast demand for ride-sharing service in North America, Europe, Asia Pacific, Latin America, and Middle East & Africa. The report also covers the demand for individual segments in all major countries across all regions.

A key driver for the market is lower capability of owning a vehicle across developing nations. Ride-sharing service offers consumers a feeling of owning a car. Developing countries have significantly lower number of vehicles per 1000 users. Consequently, demand for ride-sharing, which costs much lesser than that of owning a vehicle, is rising in these countries. Increase in fuel prices, rise in pollution coupled with global temperature rise, increase in traffic congestion, expansion of footprint of ride-sharing companies, and decrease in traveling cost are primarily driving the global ride-sharing market.

The global ride-sharing market has been segmented as follows: