Development in FPV Systems to Drive Demand for Racing Drones

Over the past one and a half decades, drones have evolved from laboratory experiments to flying vehicles that are available at brick & mortar and online stores. Technological advancements have paved the way for use of intricate components and parts that have significantly improved the stability and control of modern-day drones. Furthermore, progress in the battery technology has played an imperative role in the development of current generation of drones. In the current scenario, drones have a broad range of applications, including aerial photography, disaster management, precision agriculture, geographic mapping, and weather forecast. More recently, the dwindling prices of first-person view (FPV) systems have led to a significant rise in the number of drone hobbyists across the globe.

The meteoric rise in the number of casual drone users, along with notable advancements in the drone technology has led to significant demand for racing drones in the past few years - a trend that is expected to continue during the forecast period. In addition, the inception of multiple drone racing leagues across the world is likely to provide a significant boost to the racing drones market in the near future. Thus, despite being at a relatively nascent stage, the racing drones market is poised to grow at a staggering pace during the forecast period (2019-2027). 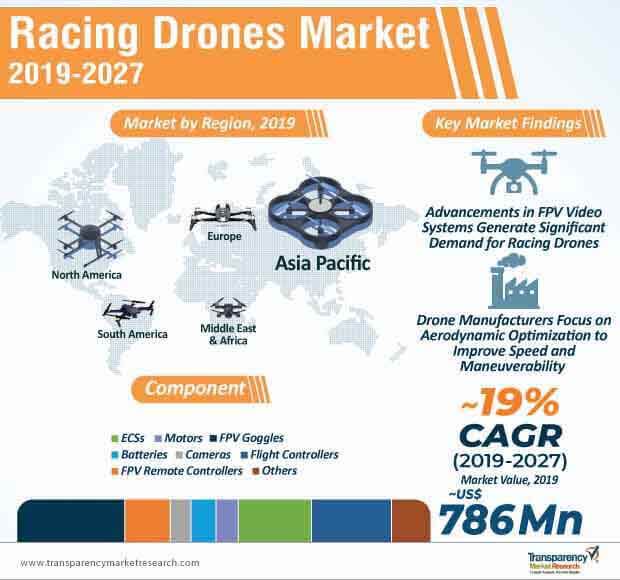 The racing drones market, which is expected to reach a market value of ~US$ 237 Mn in 2020 is projected to witness three-fold growth during the forecast period to reach a market value of ~US$ 786 Mn by 2027. At present, multi-rotor drones that are currently deployed for drone racing have not updated, in terms of technology, and have tremendous room for improvement. Stakeholders in the racing drones market have recognized the same and have stepped up their effort toward the development of highly advanced and cutting-edge drones with improved capabilities.

Witnessing the growing interest in drone racing, the first-of-its-kind Drone Racing League was founded in 2015. The inception of the league is expected to play a critical role in the development of the drone racing market in the coming years. The Drone Racing League, which is currently in its fourth season, is held across multiple locations around the world, including Germany, France, and the U.S. With significant improvements in the FPV technology, availability of a plethora of FPV goggles, and consistent developments to widen the field of view (FOV), the racing drones market has witnessed significant growth.

Organizers of the drone racing leagues are continually introducing innovative drone racing circuits that are expected to encourage and drive innovations in the racing drones market. For instance, the Drone Racing League launched an Artificial Intelligence Robotic Racing (AIRR) Circuit, a drone racing series, wherein university students and tech-geeks are invited to develop an AI framework that will enables the racing drones to fly through racing league circuits without human intervention.

Moreover, due to the growing popularity of FPV racing as a competitive sport, organizations, such as the Drone Racing League and the U.S. Drone Racing Association, have been established.

The racing drones market is entering an era wherein investments are growing at an impressive rate, as companies, including Pepsi, GoPro, and Ernst & Young, are associating with racing drone events as corporate sponsors. Moreover, drone racing episodes were recently aired on the Discovery and Science Channels, which, in turn, is expected to improve awareness pertaining to drone racing. 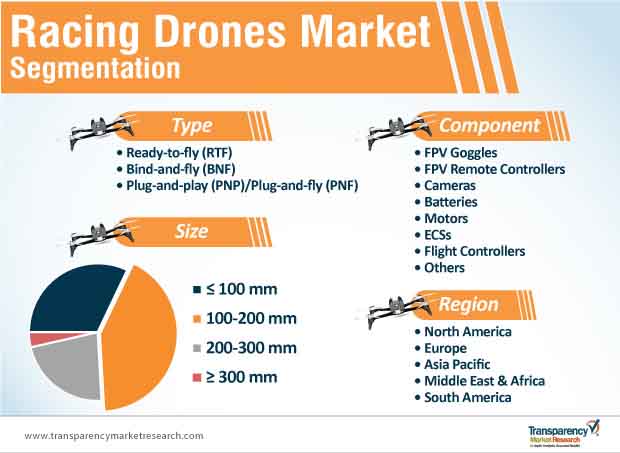 Stuck in a neck-to-neck competition with other brands? Request a custom report on Racing Drones Market

The racing drones market is expected to grow at an impressive CAGR of ~19% during the forecast period. Boom in the drone racing market is primarily due to the noteworthy advancements in the FPV video systems in which, the pilot has access to the live feed. Furthermore, development of electronic speed motors and batteries have enabled stakeholders in the racing drones market to build drones with quicker acceleration and accurate maneuvering. Stakeholders should focus on optimizing the functionalities and improving the aerodynamics of their drones to gain an advantage in the rapidly expanding racing drones market.

Key indicators of market growth, which include value chain analysis, supply chain analysis, and compounded annual growth rate (CAGR) are elucidated in TMR’s study in a comprehensive manner. This data can help readers interpret the quantitative growth aspects of the racing drones market during the forecast period.

These primary and secondary sources provided exclusive information during interviews, which served as a validation from leading players operating in the racing drones market. Access to an extensive internal repository as well as external proprietary databases allowed this report to address specific details and questions about the global racing drones market with accuracy. The study also uses a top-down approach to assess the numbers for each segment and a bottom-up approach to counter-validate them. This has helped in making TMR’s estimates on future prospects of the racing drones market more reliable and accurate.