The US uterine fibroid treatment market is expected to exhibit a healthy growth curve, as reported by Transparency Market Research (TMR). The market features a fragmented competitive landscape. Rivalry in the US uterine fibroid treatment market is projected to amplify with the entry of new players. Leading vendors in the US market for uterine fibroid devices have introduced fresh product launches and created fresh equipment and strategic acquisitions to guarantee a favorable development on this market. The presence of key players in the US acts as an impetus to market growth, offering lucrative opportunities to established as well as new players.

Companies are showing greater interest in R&D operations to implement sophisticated therapy which fulfills market needs. AstraZeneca signed an agreement for commercial rights in Zoladex (gozereline acetate) in the United States and Canada with TerSera Therapeutics LLC (TerSera) in Feb 2017. 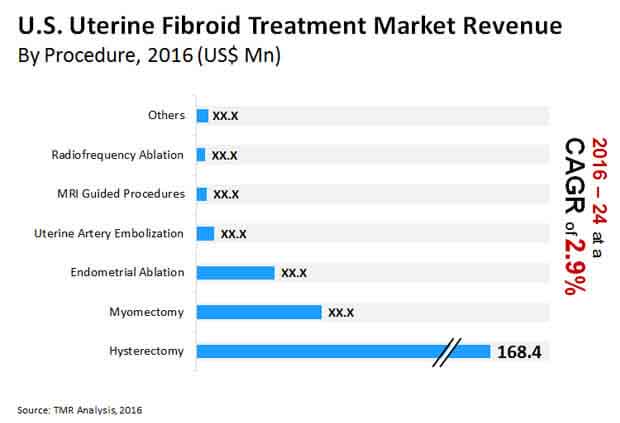 In 2015, the National Women's Health Network revealed that women with fibroids in their 30s or 40s usually have a two to three times higher chance of developing fibroids than females of other races. The elderly population in 2013 was predominantly female, according to UN DESA (United Nation Department of Economic and Social Affairs). Since females are more likely than males, elderly females almost everywhere in the globe have more elderly people.

The growing demand for hospitals and the growing concentrate on training interventional gynecologists and radiologists to apply minimally invasive robotic procedures and the ablation of radio-frequencies are some of the main variables expected to accelerate the growth of the US uterine fibroids treatment market over the next few years.

Key segments of the US fibroids treatment market are based on:

Our reports are single-point solutions for industries to grow, evolve, and mature. Our significant-time data collection methods along with ability to track more than one million high growth niche products are aligned with your aims. The detailed and proprietary statistical models used by our analysts offer insights for making right decision in the shortest span of time. For organizations that require specific but comprehensive information we offer customized solutions through adhoc reports. These demands are delivered with the perfect combination of right sense of fact-oriented problem solving methodologies and leveraging existing data repositories.

TMR believes that unison of solutions for client-specific problems with right methodology of research is the key to help enterprises reach right decision.