Innovation and Advancements to Become Grounds for Competition between Terahertz Components and Systems Manufacturers, Observes TMR

With the growing involvement of international players in the market for terahertz components and systems, the degree of competition has increased significantly, finds TMR. The leading companies, namely, Advantest Corp, TeraView, Bruker Corp, NEC Corp, Menlo Systems GmbH, and Techcomp Group Ltd., are heavily investing in research and development activities to expand their product portfolios in order to sustain in this competitive environment.

Going forward, the companies are likely to compete on the basis of innovation and advancements. Product pricing will also play a key role in providing the manufacturers an edge over each other. Analysts at Transparency Market Research predict a high degree of competition as well as profitability in this market over the coming years. 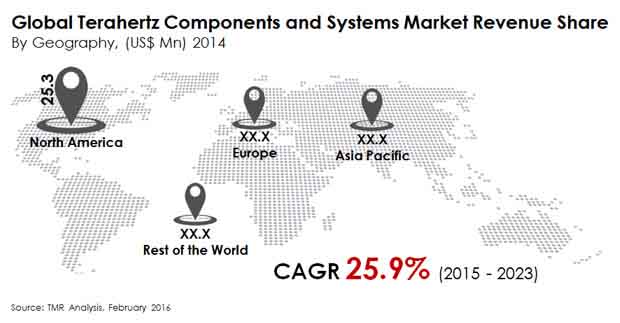 “Terahertz technology has found a widespread application in the fields of biology, molecular spectroscopy, medical science, and space sciences”, states an analyst. As terahertz radiation does not possess any ionization threat for biological tissues, thanks to its low photon energy, terahertz imaging solutions are gaining immense popularity in medical applications, increasing the demand for terahertz components and systems significantly.

Going forwards, the advancement in terahertz technology and the augmenting application of terahertz components in medical imaging and non-destructive testing are anticipated to boost the market’s growth over the next few years.

On the other hand, the limited penetration level of terahertz radiation may hamper the application of terahertz components and systems in various other industries in the near future. Their demand may also be influenced negatively by the lack of awareness pertaining to the benefits offered by terahertz technology and the dearth of skilled professionals for the management of terahertz devices.

North America to Save Leadership but Lose Significant Amount of Shares

According to TMR’s estimations, the global opportunity in terahertz components and systems in 2014 was worth US$56 mn. Expanding at a CAGR of 25.90% between 2015 and 2023, analysts expect it to increase to US$415 mn by the end of the forecast period.

North America emerged as the leading contributor to this market in 2014 with a revenue share of 45.2%. The region although will remain leading, it will lose a significant number of shares to Asia Pacific in the coming years, which is likely to register a rise in its total revenue share from 18.5% in 2014 to 23.2% by the end of 2023.

In 2014, terahertz components and systems were mostly utilized in research laboratories. However, their application is anticipated to increase significantly in industrial process monitoring during the forecast period. Terahertz sources were the most prominently demanded components in 2014. However, terahertz detectors are projected to exceed the former by 2023.

Currently, spectroscopy-based systems are leading the overall demand for terahertz systems and are expected to remain dominant throughout the forecast period.

The study presented here is based on the findings of a report by Transparency Market Research (TMR) titled “Terahertz Components and Systems Market - Global Industry Analysis, Size, Share, Growth, Trends, and Forecast 2015 - 2023.”

The global terahertz components and systems market has been segmented as follows: