The global market for sulfuric acid is characterized by a highly fragmented competitive landscape, finds Transparency Market Research (TMR). As small and medium-sized firms account for a major portion of the market revenue, the degree of rivalry between established market players and them can intensify over the next few years.

Mergers, collaborations, and acquisitions are some of the prominent business tactics used by several companies. For instance, Chemrade Logistics Inc. purchased Hydor-Tech Ltd. (HTL)’s operating assets. HTL is a leading producer of inorganic coagulants such as polyaluminum chloride (PACl), which is extensively used in municipal and industrial water treatment plants. Some of the leading manufacturers of sulfuric acid are Vale Fertilizantes S/A, The Chemours Company, and The Mosaic Company. 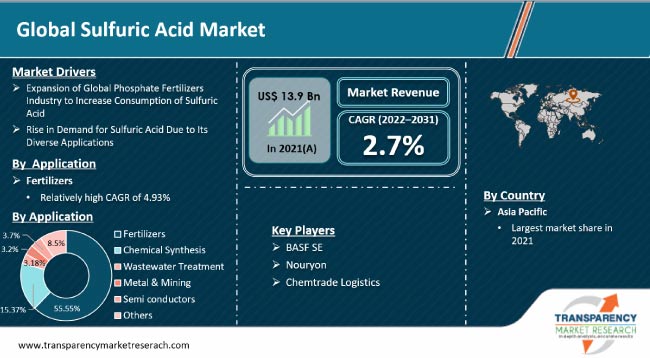 Extensive Industrialization to Fortify Demand for Sulfuric Acid in APAC

Analysts expect Asia Pacific to retain its dominant position over the forecast period. The rapid growth in industrialization, massive population base, and the presence of leading market players in countries such as China and India are boosting the growth of this region.

The growth of the fertilizers segment can be attributed to the increasing deployment of sulfuric acid in wastewater treatment, chemical synthesis, and pharmaceuticals. As the manufacturing of fertilizers such as ammonium phosphate, ammonium sulfate, and superphosphates requires sulfuric acid, this segment might continue to grow, albeit at a gradual pace.

Demand for Fertilizers in Emerging Markets to Accrue Balanced Growth

The shift in the regional market dynamics from the prominence of developed economies such as Europe and North America to the dominance of emerging markets of Asia Pacific can be attributed to the greater exploitation of raw materials, growing environmental awareness, and technological advancement in the region. As the Chinese market flourishes, the global market for sulfuric acid is likely to receive a substantial impetus.

Increasing government encouragement for further advancement of industrialization, growing GDPs, unrestrictive environmental regulations on particulate emissions and VOC, increasing disposable incomes of the middle class, easy availability of manual labor, and expanding consumer base due to increasing population have been driving the global market for sulfuric acid. The cultivation of crops such as wheat, soya bean, rice, and cotton in China, India, and South Africa will necessitate a greater supply of fertilizers, further bolstering growth.

On the flip side, the fluctuating costs of raw materials such as natural gas, crude oil, and sulfur might prove to be the key obstacles in the growth of the market. Moreover, stringent regulations pertaining to the production and consumption of sulfuric acid in developed regions might also hinder growth. However, the development of alternative methods for obtaining sulfur can ensure that these restraints have minimal impact on the advancement of the market.