Transparency Market Research has released a market study, titled “Solar Cell Films Market - Global Industry Analysis, Size, Share, Growth Trends, and Forecast 2015 - 2023”. According to the report, the global solar cells market will expand at a CAGR of 9.40% from 2015 to 2023. If the figure holds true, the valuation of the market will be US$20.9 bn by the end of the aforementioned forecast period; the market stood at US$9.4 bn in 2014.

Owing to the numerous benefits of solar cell films, the demand for the same has been on the rise over the past few years, thereby benefitting the solar cells market, says the report. Second-generation solar cell films are exemplary with respect to the advantages they offer over their predecessors, which used a much thicker wafer. The advantages of solar cell films include low manufacturing costs, high product efficiency, and zero carbon emissions, which serve the energy needs in an economic manner with a consideration of the environment as well.

The use of solar energy reduces the dependency on conventional fuels for energy needs. This helps save conventional fuels for high-intensity energy production, where solar energy is not effective. Thus, energy security for the long run is ensured as well. In this pursuit, environmental and government agencies are offering subsidies to promote the utilization of solar cell films for commercial and domestic energy needs. 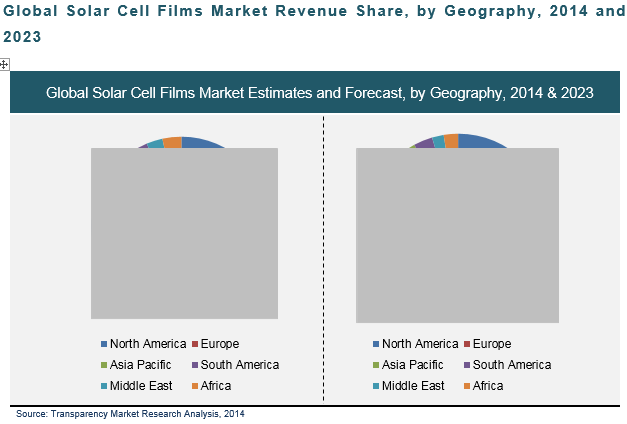 To promote the utilization of solar energy in the commercial sector, governments in several countries, especially in countries that are close to the equator and have high-intensity sunlight for a major part of the year, are offering financial incentives and complimentary installations to harness the energy. Attractive feed-in tariffs are also provided for citizens who supply excess electricity to the grid.

Some major companies operating in the solar cell films market are Heliatek GmbH, 3M, First Solar Inc., and Stion Corporation, among others.

The global solar cell films market has been segmented as follows: