With keen players focused on product innovation and technological advancements to boost their market presence, competition within this market is expected to intensify in the upcoming years, says the report.

As per estimates presented in a report by Transparency Market Research, the global smart bullets market will expand at a healthy CAGR of 15.20% for the forecast period between 2017 and 2025. Progressing at this pace, the market’s valuation of US$270.4 mn in 2015 will become US$955.4 mn by the end of the forecast period in 2025. 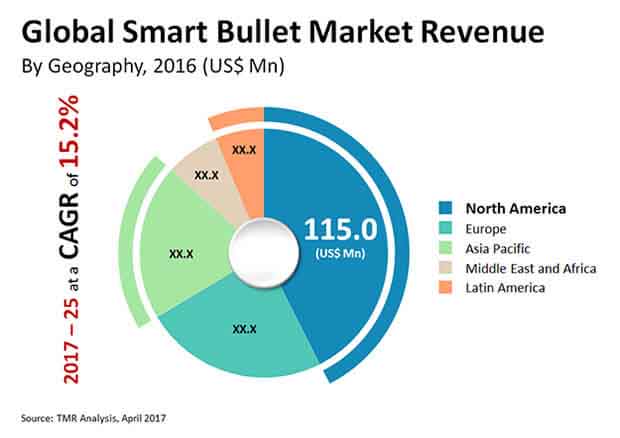 Amongst all, in 2016, the land segment stood as the leading end user with a share of 43.6% in the smart bullets market. Analysts estimate the land segment to retain its dominant position over the forecast period, thanks to the increasing military and defense budgets in emerging economies for the development of smart weapons.

North America, closely trailed by Europe dominated the overall market in 2016 accounting for more than 42% share. Europe is also a key market for smart bullets. The demand in the region is driven by significant budget from the government in countries such as the U.K., France, Russia, and Germany for the development of smart weapons.

Technological innovations in the weapons sector and improvements in currently existing weapons is making a positive impact on the smart bullets market. Moreover, the use of laser beam leading to technological advances such as adjustment in the bullet’s path according to target is also expected to mark tremendous growth in this market. Lockheed Martin and Teledyne Scientific & Imaging have been awarded a contract from the Defense Advanced Research Projects (DARPA) to develop 0.50 caliber smart bullets with higher precision to hit the target.

Lockheed Martin Corporation received a contract from the U.S. DARPA in February 2016 to design and manufacture medium-caliber smart bullets. The contract received by the fire and missiles segment of the organization upon completion will help the navy to fight off attacks from fast attack boats, missiles, and aircrafts. These developments are likely to fuel growth of the global smart bullets market over the forecast period.

On the contrary, high manufacturing costs of smart bullets and lack of awareness among consumers are acting as deterrent to the market’s growth.

The global smart bullets market is segmented as follows: