Plant-based Milk Market to Reach a Value of ~ US$ 30 Bn by 2029: Transparency Market Research

A latest market forecast report published by Transparency Market Research on the plant-based milk market includes the global industry analysis and opportunity assessment for 2019-2029. Revenue generated from the global plant-based milk market has been estimated to be valued at ~ US$ 14 Bn in 2019, and is projected to increase at a CAGR of ~ 8%, to reach ~ US$ 30 Bn by 2029. 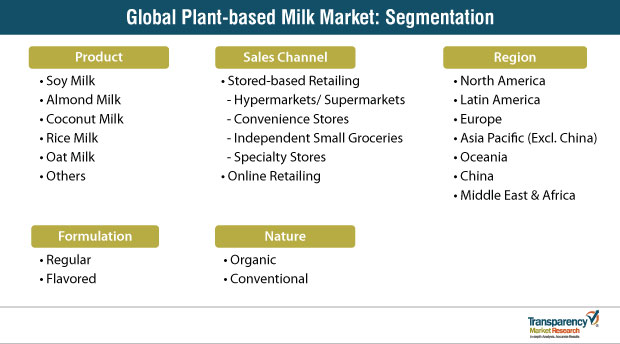 Consumers are becoming more sensitive and sympathetic towards animals, due to the conditions and environment in which they are raised and harvested. Animal welfare is one of the primary reasons for consumers opting for plant-based products, such as plant-based milk and other non-dairy alternatives.

Consumers are choosing safer plant-based milk due to rising food safety concerns related to the usage of hormones and different types of antibiotics in dairy-based products. Also, the number of people suffering from food-borne allergies and intolerances has led to the shift of consumer preference towards plant-based alternatives.

Today’s population is adopting a preventive diet that emphasizes on the greater consumption of plant-based products. While intolerance (e.g., lactose intolerance) or food allergies determines some of these diets, others such as flexitarian diets and the Paleo diet are chosen by consumers who aim to achieve superior well-being.

Growing functional disorders and organic gastrointestinal diseases are resulting in an increasing population that is suffering from improper gut health. The ever-increasing necessity to improve gut health has resulted in the consumption of probiotics that promote gut health, along with the consumption of plant-based milk. Plant-based milk is increasing in popularity due to its digestive and immune benefits, which help in preventing urinary and vaginal infections, and obesity.

Consciousness and alertness regarding the consumption of food products are currently moving to the idea of deep-rooted clearness. With improving technology, consumers now have access to smart labels, with the help of which, they can trail the journey of a food product and check against its individual potential. Consumers are nowadays compelling the food companies to increase the clearness of their products, going beyond ingredients, free-from status, and nutritional value. This is determined by the buyer's continuously increasing demand to comprehend the product-related questions that they have in mind, such as from where and how the ingredients were obtained, till the end product.

In 2016, according to the International Food Information Council (IFIC), 38% of the American population named 'chemicals', as in, the presence of too much chemicals as their top food safety concern. This proves that, a majority of the North American people no longer believes in chemicals and uncommon sounding ingredients in their food.

According to Ingredion, a leading global ingredients solutions company, around 80% of consumers, globally, feel that it is important that they recognize all the ingredients listed on their food and drink packaging. A global survey conducted across 17 countries indicated that, consumers assume that, a brief and modest ingredient list is important; Chinese customers were ranked 4th most probable to read ingredient lists.

Consumers, irrespective of age, are seeing food and beverages as a primary path leading towards health and wellness. Plant-based beverages are rich in nutrients, and have no added flavor or additives, which helps in maintaining body weight, cholesterol, and blood pressure levels, and aids in preventing ailments such as cardiovascular diseases and obesity.

The recent rush of big food companies obtaining or investing in smaller, independent brands is driving the push for the mainstream acceptance of plant-based milk. Danone, a leading food and beverage company, investing US$ 30 million in U.S. coconut water brand Harmless Harvest, and Coca-Cola Company acquiring Unilever’s AdeS plant-based beverage business, are examples of a few of the strategic moves that big companies have made to tap into the plant-based milk market.

Tedious Process of Regulatory Approval in the Plant-based Milk Market

Plant based products, including plant-based milk are facing legal and regulatory restraints, which may result in the declining popularity of plant-based milk products. Plant based milk is facing legal and regulatory inspection as industry associations prevent manufacturers from using labels and terms that consumers find more relative. For instance, in 2017, The European Court of Justice ruled that, plant-based milk and other plant-based items can't be described using dairy terms, like milk, even though their plant-based origins are marked. In the same year, in the United States, a bill titled the 'Dairy Pride Act' was presented in the Senate, to prevent plant-based food manufacturers from using dairy names or terms. The Senate Committee has still not approved the bill. However, the dairy business is pushing hard to get the bill passed. Coming up with terms that resound with customers without aggravating trade groups will go far toward enabling the acceptance of plant-based foods.