Non-volatile memory express (NVMe) is a scalable controller interface between the host and the data storage. It defines a command set and feature set for PCIe (peripheral component interconnect express)-based SSDs (solid state drives), which are aimed at enhanced performance and interoperability of a broad range of enterprise systems and client systems. Non-volatile memory express is characterized by low power consumption, high throughput, improved performance, and enhanced IOPS command handling. 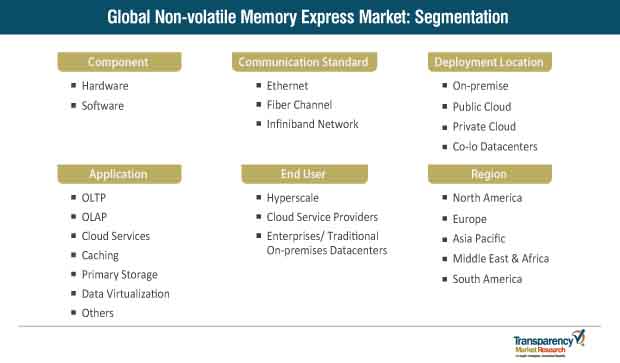 The rising popularity of SSDs among enterprises and consumers is the primary factor driving the demand for NVMe across the globe. In recent years, SSDs have started gaining popularity as a preferred tool for storage. Their sales are even surpassing the sales of HDDs (hard disk drives) in the enterprise sector. Their adoption over HDDs has risen to a level at which several types of HDDs are being rarely used in new machines. This can be attributed to the lightning-fast speed offered by SSDs, more number of form factors, better performance, lower power consumption, lower space requirements, and low probability of failures. Thus, SSDs are witnessing increased demand from enterprises and consumers. Furthermore, the falling per-gigabyte prices of SSDs have led to a surge in the demand for flash media among mobile phone manufacturers and other industries such as automotive and game consoles. Non-volatile memory express is designed exclusively for SSDs in order to facilitate more rapid and efficient access to them. It enables a more rapid interface for leveraging the speeds that SSDs are capable of. NVMe uses the peripheral interconnect interface (PCI) technology to transfer data between the CPU (central processing unit) and the SSD. This enables lower latency in data transmission, which is highly beneficial for enterprises and even consumers. This makes non-volatile memory express a preferred choice of interface for SSD storage among enterprises and consumers. This factor further drives the global non-volatile memory express market.

However, the high costs associated with non-volatile memory express technology are likely to adversely impact the global NVMe market during the forecast period.

Asia Pacific is estimated to present prominent growth opportunities to the NVMe market during the forecast period. This can be attributed to the rising popularity of SSDs in the region and rising adoption of non-volatile memory express SSDs by enterprises as well as consumers from other industry verticals such as hyperscale and cloud service providers in the region. In developed regions such as North America, significant increase in the volume of data generated by enterprises and rising popularity of SSDs as a part of storage solutions are fueling the demand for NVMe in the region. This scenario has led to significant growth of the non-volatile memory express market in the region. The NVMe markets in the Middle East and South America are expected to witness moderate growth in the near future.

Key players operating in the global NVMe market are sharpening their competitive edges to display synergies through close cooperation and collaboration in the areas of sales, marketing, and production. Manufacturers are also expanding through organic methods, such as increasing the production capacity, in order to meet the rising demand.