The global near-field communication (NFC) chips market has been prognosticated in a report by Transparency Market Research (TMR) to be highly consolidated with NXP Semiconductors securing a stronger share in the recent past. The company could sustain its position all through the course of the forecast period 2016-2024. The market includes other leading companies such as Qualcomm Inc., STMicroelectronics, and Broadcom Corporation that are actively involved in partnerships and mergers and acquisitions. This could intensify the competition in the market in the coming years. The report has shed more light on other factors that could impact the vendor landscape of the market.

TMR has envisaged the NFC chips market to post a whopping CAGR of 26.0% to attain a valuation of US$10.62 bn by the concluding forecast year. On the basis of application, the market could gain immensely from smartphones anticipated to secure a larger share in the near future. By region, Asia Pacific may snatch the dominance from North America while expanding at a 27.90% CAGR. 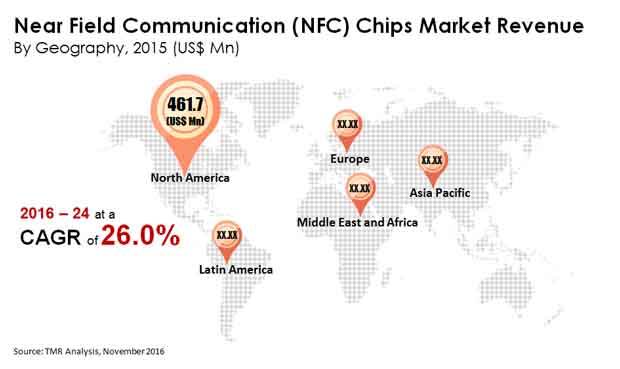 According to a lead analyst at TMR, the world NFC chips market could primarily collect growth from the rising application in consumer electronics. In the recent years, the application of NFC chips in consumer goods has increased considerably due to their ability to improve the applicability of user interfaces and simplify them. There could be substantial growth prospects created with the extensive use of NFC chips in smartphones as well.

Rising disposable income of people and their swelling interest in luxury goods have been expected to augur well for the growth of the consumer electronics industry, which could in turn augment the demand for NFC chips.

Lack of awareness about NFC chips and complexity in their product designs could hamper the adoption rate in the foreseeable future. However, with the improving demand for NFC-enabled point of sale terminal (POS) terminals around the globe, the international NFC chips market has been envisioned to draw a handsome growth from the aviation and retail industries.

Furthermore, the emergence of various NFC models and strong partnerships between organizations tokenizing cards using NFC chips and prominent banks could bring in lucrative opportunities in developed regions such as North America. Emerging regions such as Asia Pacific, on the other hand, have been prophesied to take advantage of the rising count of smartphone users.

The global NFC chips market has been segmented as presented below: