Transparency Market Research recently published a study that provides valuable insights into the mulch films market, which include global industry assessment, size, share, growth, developments, as well as a forecast for 2022–2026. The global mulch films market is expected to grow at a CAGR of 5.9%, in terms of revenue, over the forecast years, owing to a variety of factors that TMR discusses. The mulch Films market analysis report contains in-depth insights and forecasts. 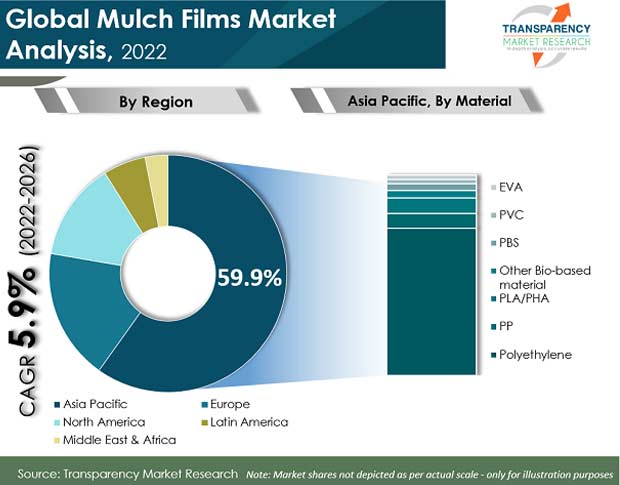 When opposed to prior trends, the global mulch films market is estimated to grow at an even faster rate over the forecast period. In terms of end use, agriculture is the most profitable and widely used segment for mulch films. The market is driven by sustainability, cost-effectiveness, lightweight, and durability. Bio-degradable films are already gaining popularity in the agriculture sector. It is forecast that even though non-biodegradable films are widely utilized, the use of biodegradable mulch films is projected to increase in upcoming years.

Use of Technology in Mulch Films to Help Strengthen Market Growth

Mulch films first appeared in the early 1960s as a by-product of the makers of plastic film, since that can be produced on the same cast-film lines and even embossing rolls. Majority of mulch film now is blown, though some of it is still cast. In either case, it is typically imprinted with small bumps to give it a rubberized feel and allow it to stretch over the soil.

Governments in developing economies are focusing on technological advancements in agriculture. Governments are working on training, education, and skill development initiatives, as well as other initiatives. Subsidies are being provided to farmers in order to meet the agricultural requirement.

Government initiatives on advanced farming techniques is leading to the growth of the agricultural product industry. In comparison with other regions, agricultural methods in North America are highly advanced and developed. The use of mulch films is promoted by governments, which enable sustainable agriculture through adaptation to climate change measures.

Cultivators are encouraged to use products with simple reusability and good biocompatibility that do not radiate hazardous emissions in the atmosphere. Furthermore, customers' purchasing habits toward eco-friendly packaging are favourable, presenting an enticing growth opportunity for mulch films manufacturers.

Leading market players in the global mulch films market are focusing on strategies such as expansion, new product launches, and acquisitions to gain large market share and enhance their global presence in the target market.

For instance, in October 2020, National Storm Recovery Inc. announced the acquisition of 35-year-old Mulch Manufacturing Inc., an Ohio-based corporation due to the company’s major synergies and potential advantages involved.

Pliant, a mulch Films manufacturer, announced the introduced black mulch films with a single white stripe that places TiO2 directly beneath the plants.

Hyplast, a Belgian produce of mulch films, has created seven layer high barrier which are made of mLLDPE and nylon. VIF mulch films are produced in Europe but are sold in United States by the sister company Klerks Microplastics.

Mulch Films Market by End use

Economic growth in several parts of the world that has deeply influenced consumer behavior toward food, healthcare, and consumer goods and has had a solid impact on the packaging sector is well-covered in our reports.