Extensive use of mulch films in the agriculture and horticulture sector is prospering the mulch films market and this growth may continue in the forecast period 2019-2027. Mulch films are widely used on the soil to reduce weed growth and enhance crop yield. They are also used for retaining moisture levels in the soil and protecting the soil from ultraviolet (UV) rays. Mulch films market is classified in organic, anaerobic, colored, polypropene, polyethylene, ground covers and biodegradable based on properties.

Mulch films are being increasingly used in agriculture and horticulture to modify soil temperature, minimize weed growth, and improve crop yield. There is increasing awareness about mulch films amongst consumers due to advantages such as less investment on weedicides, early harvest of crops, and increase in quantitative output of crops.

As such, stakeholders are carrying out research and development to improve the thickness, use of pigments, and the exposure to high solar irradiation in mulch films. Ongoing research and development activities in the mulch films market are being made to develop efficient thermal stabilizers with intermediate chemical resistance in these films. Thus, the breakdown of biodegradable elements in the soil provides several benefits for agriculture and horticulture products. 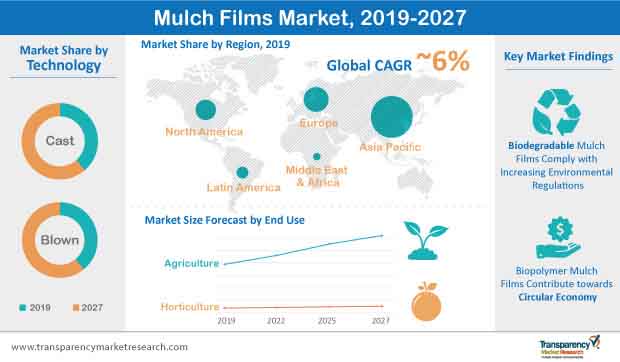 Biopolymer mulch films serve as an efficient alternative to enable a closed-loop system that aids organic waste collection and prevents littering of conventional mulch films in the soil. The adoption of biopolymer mulch films helps complete the loop of the food-value chain, as such, leaving very little need for the disposal of waste materials in agricultural applications. The end-of-life options for biopolymer mulch films lead to several advantages, such as biodegradability of the soil, and home and industrial compost ability.

The mulch films market also supports the concept of the circular economy. Thin polyethylene (PE) mulch films are used by farmers to increase crop yield. However, while harvesting the crops, it is difficult for farmers to collect PE mulch films, since they are only a few micrometers thick. The adoption of biopolymer mulch films reduces residual waste in the soil. For instance, in May 2019, BASF SE ? a leading German chemical company operating in the mulch films market, announced the launch of ecovio® a high performance compostable and soil-biodegradable plastic used for agricultural and packaging applications. 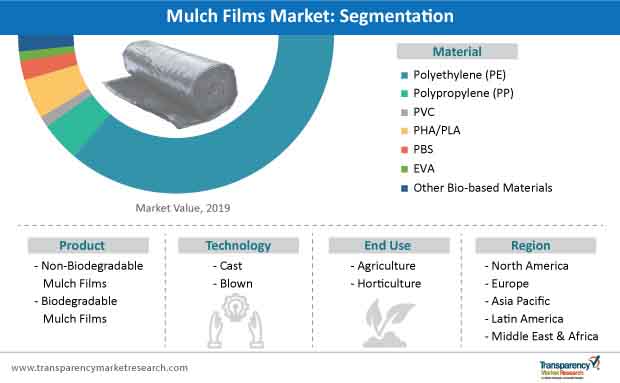 Stuck in a neck-to-neck competition with other brands? Request a custom report on “Mulch Films Market"

Analysts’ View on the Growth of the Mulch Films Market

Continuous Use of Mulch Films to Reduce the Quality of Soil

Some of the key developments in the mulch films market are as follows:

Y-o-Y growth comparison, volume and revenue comparison, and market share comparison of various market segments are provided in the report. The mulch films market is analyzed at both, regional and country levels.

The mulch films market report delivers an exhaustive evaluation on the structure of the mulch films market, in tandem with a dashboard view of all the leading company profiles in the report. Every company’s share analysis has also been presented in the report, apart from the footprint matrix of the profiled market players. The report depicts the presence of biodegrable & non-biodegradable mulch film manufacturers by leveraging an intensity map. The report also highlights the key end users for mulch films.

A realistic methodology, along with a holistic approach makes the base for the sharp insights that are provided in the mulch films market report for the study evaluation period. The TMR report comprises detailed information on the growth prospects of the mulch films industry, along with riveting insights into the forecast assessment of the market.

The global mulch films market has been bifurcated on the basis of product, material, technology, end use, and region. Each of these segments are analyzed to provide readers a holistic view of the industry.