The global LED retrofit market was valued at US$ 2,046.7 Mn in 2016 and is projected to register cumulative annual growth rate (CAGR) of over 9.25% from 2018 to 2026, according to a new report published by Transparency Market Research (TMR) titled “LED retrofit Market – Global Industry Analysis, Size, Share, Growth, Trends, and Forecast, 2018–2026.” The LED retrofit market is expected to grow significantly due to increased cost efficiency and long life duration. The report suggests that the prominent adoption of LED lighting is expected to boost the LED retrofit market at the global level for the forecast period of 2018-2026. Additionally, LED based solutions are gaining popularity in residential and commercial applications, which holds a significant share in the market. Furthermore, multiple states of the U.S. have adopted LEDs due to these large number of benefits. For instance, in April 2017, General Electric, a leading lighting solutions company, published a report stating that multiple states have adopted LEDs on a significant scale namely- Seattle, Washington- 35.5% and Minneapolis, Minnesota 32.9% leading the way. Such initiatives are expected to have a positive impact on the global LED retrofit market. 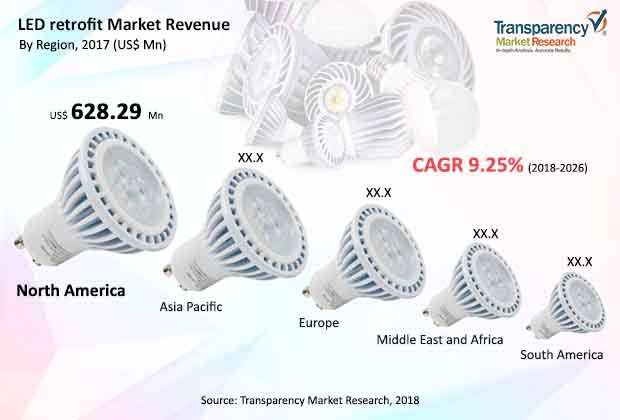 LED retrofit lights can suffer a significant drop in performance or even face mechanical failure, due to the temperature issues associated with LEDs, as growth of LED retrofit is directly dependent on the growth of LEDs. In 2016, the American Medical Association (AMA) in the U.S. adopted an official policy statement about street lighting: “Cool it and Dim it.” Within the statement, AMA discussed issues related to LEDs such as the high color temperature owing to the blue light content in LED. Alternatively, they suggested using LED’s with appropriate blue light content to boost the adoption of LED in the U.S.

On the basis of application, the LED retrofit market is segmented into residential, commercial, industrial, and others. Additionally, on the basis of type, the global LED retrofit market is divided into indoor and outdoor. The outdoor segment is predicted to expand at a significant CAGR over the forecast period. Increasing adoption of LED in street lighting applications across the globe is a primary factor for the growth of the outdoor LED retrofit market. For instance, Norway has adopted smart street lights that dim to 20%in the absence of cars nearby. The market in the industrial sector is expected to grow at the highest CAGR over the forecast period from 2018 to 2026. However, the residential sector holds a prominent share for the year 2026, as adoption of linear LED retrofit lights in households around the globe is continuously increasing.

In terms of growth, Asia Pacific is expected to witness highest CAGR growth over the forecast period. The factors contributing to the growth in Asia Pacific is the rising adoption of LED across the region due to continuous increasing population. The rising adoption level of LED is expected to fuel the growth of the linear LED retrofit market in the region. Furthermore, multiple initiatives taken by government bodies in the region are anticipated to boost the LED retrofit market during the forecast period 2018-2026. For instance, in 2017, as per the “Street Light National Programme” of the Indian government, 2,100 thousand LED’s were installed across India. Furthermore, the growing adoption of smart cities in developed countries like Japan is having a prominent impact on the LED retrofit market.

Philips Lighting Holdings B.V., OSRAM Licht Group, Fulham Co., Inc., Tridonic, General Electric Company, Eaton, and Cree Inc. among others are some of the major players operating within the LED retrofit market profiled in this study. Various market players are establishing partnerships, and entering into strategic M&A to enhance the LED retrofit offerings worldwide. For instance, in November 2017, Osram’s Digital Lumens formed a partnership with Industrial Lighting Products, a prominent manufacturer of energy-efficient luminaries and retrofit solutions, which can help the growth of retrofit solutions by OSRAM Licht Group.

The global LED retrofit market has been segmented as follows: