According to a new market report published by Transparency Market Research Interventional Cardiology Devices Market- Global Industry Analysis, Size, Share, Growth, Trends and Forecast, 2014 - 2022, the global interventional cardiology devices market was valued at USD 8.7 billion in 2013 and is expected to grow at a CAGR of 2.9 % from 2014 to 2022, to reach an estimated value of USD 11.2 billion in 2022.

Global interventional cardiology devices market is expected to witness slow growth during the forecast period due to decrease in average selling price as a result of continued competitive pressure and steady growth in percutaneous interventions in developed markets (U.S. and Canada). However, increasing volume of percutaneous interventions as compared to the coronary artery bypass graft surgeries in the emerging countries relative to the developed market (U.S. and Canada) and increasing penetration of optical coherence tomography based catheters are key factors that would ensure the market growth. Likewise, volume of percutaneous interventions would increase due to rapidly expanding geriatric population base and increasing penetration of minimally invasive surgeries that ensure short hospital stay and quick patient recovery, resulting in increased demand of interventional cardiology devices. Technological advancements that have led to introduction of bio-absorbable vascular scaffolds exhibit higher efficacy in terms of curbing re-stenosis prevalence which also anticipated to open new avenues for the manufactures operating in this segment. 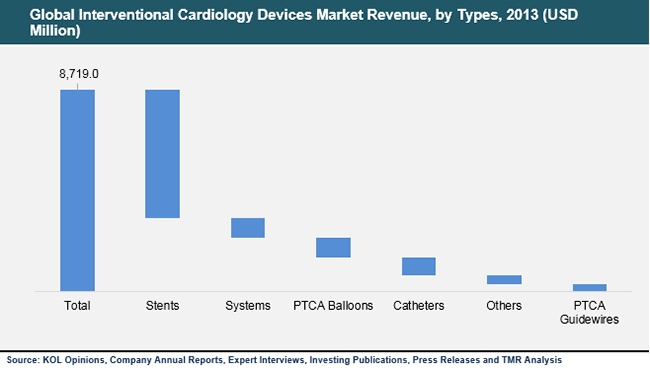 The market for interventional cardiology devices has been broadly segmented into stents, catheters, PTCA guidewires, balloons, imaging systems and others. In 2013, stents accounted for the largest share of the total market, followed by imaging systems. The stents market has been further divided into bare metal stents, drug eluting stents and bio-absorbable vascular scaffolds (BVS). In 2013, drug eluting stents claimed the largest share of the total stents market, followed by bare metal stents and BVS. During the forecast period, the demand for bare metal stents and drug eluting stents is expected to show negative growth rate and the overall growth would be offset by increasing volume of BVS. BVS market has been predicted as the fastest growing segment due to presence of innovative products in the pipeline and their anticipated launch at premium prices in the next five to ten years globally.

In 2013, North America held the largest share in the global interventional cardiology devices market in terms of revenue. Presence of leading manufacturers in the region and high awareness about coronary angioplasty are the major factors that contributed to the leadership position of the region. Coronary stents account for over 60% of the IC devices market in the U.S. in terms of revenue. According to the Centers for Disease Control and Prevention (CDC), in 2010, 454,000 coronary stents were used in patients suffering from cardiac artery disease and 1 million cardiac catherizations were performed. Drug eluting stents (DES) were used in approximately 75% of the procedures as compared to bare metal stents (BMS). The prices of DES are much higher than BMS, thereby increasing market revenue. However, the interventional cardiology devices market in the U.S. is projected to witness reduction in market size due to slow growth in percutaneous coronary intervention (PCI). Asia Pacific and Latin America are most lucrative regional market for interventional cardiology devices market due to large population base, increasing disposable income, and rising number of patients diagnosed with cardiac artery disease.

The global Interventional Cardiology Devices market is segmented as follows: