The global hybrid cars market features an intensely competitive landscape with the presence of a high degree of competition among the top players, observes Transparency Market Research (TMR). The leading players operating in the hybrid cars market are BMW, Toyota, General Motors, Hyundai, Nissan, Volkswagen, and Honda. These company are focused on innovative pricing strategies and launching advanced versions in order to consolidate their market shares across major regions, notes TMR. In addition, the entry of new players is further expected to intensify the competitive dynamics in the hybrid cars market.

Several prominent auto makers are launching advanced plug-in hybrid models to gain a competitive edge in the hybrid cars market. The market for hybrid cars is projected to expand at an impressive CAGR of 16.50% from 2016 to 2024. The global market for hybrid cars stood at US$102.88 bn and is expected to reach a value of US$398.90 bn by the end of the forecast period. 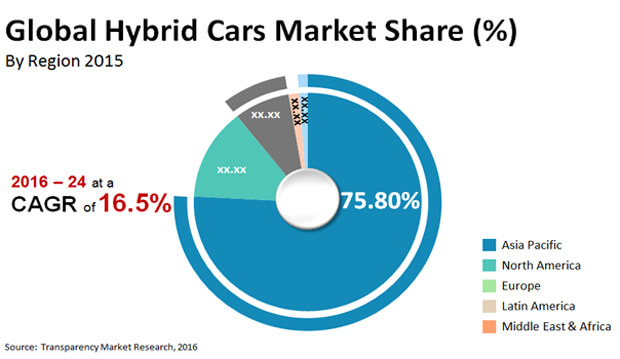 Geographically, the global hybrid cars market is segmented into Asia Pacific, North America, Latin America, the Middle East and Africa, and Europe. Of these, Asia Pacific occupied a major market share in 2016 and is expected to maintain its dominance throughout the forecast period. The substantial uptake of hybrid cars in this regional market is attributed to the increased awareness about the numerous benefits of eco-friendly cars in several countries.

The hybrid cars market is mainly driven by the demand for cleaner drivetrain technologies world over and the strict implementation of the government regulations in various regions to cut down on carbon emissions. The soaring awareness to cut down on toxic air pollutants emitted from combustion engines in developing markets has boosted the uptake of hybrid cars. For instance, the demand for hybrid cars, particularly plug-in hybrids, is propelled by the several benefits they offer over conventional cars such as zero tailpipe emissions. In addition, the surge in popularity of various types of hybrid cars is attributed to the substantial fuel economy.

However, the increasing popularity of electric cars in emerging markets and significant incentives by the governments in these countries, such as lowering taxes on loans electric vehicles, are developments likely to hinder the market into an extent. Nevertheless, the setting of robust infrastructure for electric vehicles in a country like India is still far-fetched. As a result, in the near future these countries are likely to witness moderate demand for hybrid cars. Furthermore, recent favorable changes in regulations on limiting carbon dioxide emission such as the Corporate Average Fuel Economy (CAFE) standards in the U.S. is likely to offer an impetus to the hybrid cars market. For instance, the significant credits offered to automakers in adopting emissions-reducing technologies have stimulated manufacturers in making advancement in hybrid car technology.

The global hybrid cars market is segmented based on: