The global cryptococcosis market is highly fragmented with the presence of numerous small and medium-sized companies competing against each other. However, the market is dominated by few large companies based in developed regions. The top four players—Pfizer, Inc., Bristol-Myers Squibb Company, Valeant Pharmaceuticals, Inc., and Janssen Biotech, Inc.—accounted for a combined share of 41.0% in the global market for cryptococcosis, in terms of value, in 2015.

Transparency Market Research (TMR) notes that the leading companies are making substantial investment in research and development activities and actively consolidating their presence in developed markets to stay ahead of others. Furthermore, the leading players are actively making mergers and acquisitions to strengthen their presence across all major regions, finds TMR. Several prominent companies are making efforts to consolidate their distribution network. 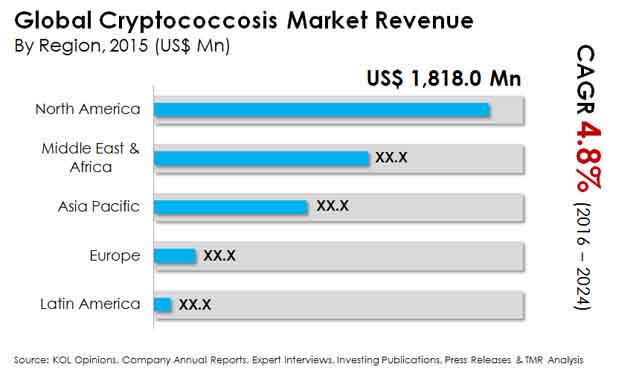 On the basis of the distribution channel for offering treatments, the global market for cryptococcosis is segmented into retail pharmacies, mail order pharmacies, hospital pharmacies, and drug store. On the basis of revenue generation, retail pharmacy segment dominated the global market in 2015 and the segment is poised to maintain its lead along the forecast period. The impressive growth in the regional market is attributed to the substantial demand for long-term therapies for successful treatment of cryptococcosis.

Over the past few years, there is a steady rise in the incidence of the fungus disease cryptococcosis causing life-threatening infections worldwide, particularly pneumocystis pneumonia and cryptococcal meningitis. A growing population in different countries of Africa are infected with HIV-AIDS, which has increased the mortality caused by the prevalence of cryptococcosis. Coupled with this, an increasingly large number of people in different economies are getting aware of the growing menace of the disease. These factors have spurred the demand for treatments for cryptococcosis.

However, the high morbidity and mortality among a large number of patients suffering from cryptococcosis is likely to restrain the market to an extent. For instance, pneumocystis pneumonia and cryptococcal meningitis are the major infections for which the mortality rate is high worldwide. Numerous patent expirations in the near future and the upsurge in the number of generics developed for cryptococcosis treatment has led to declining revenues for large companies. On the other hand, several manufacturers setting up integrated facilities in various regions has enabled them to gain the benefit of economies of scale thereby reducing operational cost. This has offered them a competitive edge over others, creating lucrative avenues in the cryptococcosis market.

Governments in various regions, especially in resource-poor countries of Africa, are undertaking intensive and sustained efforts to eradicate the disease. The rising support by the governments in developed and developing regions has stimulated R&D funding by private players. Several companies are making substantial investment in developing pipeline drugs and strengthening their distribution networks across the globe. These factors are expected to fuel the global cryptococcosis market.

The global cryptococcosis market is segmented into: