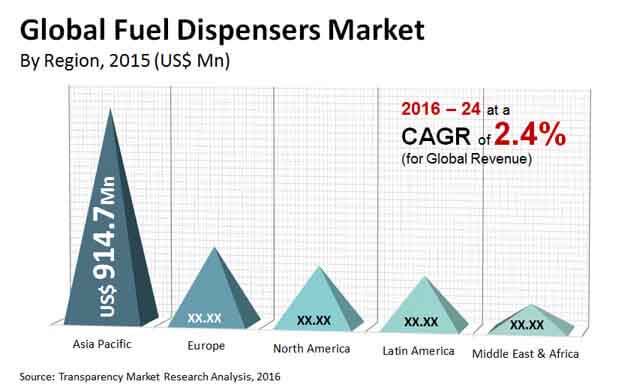 The booming automotive industry in China, Japan, South Korea, and India is another major driver for the Asia Pacific fuel dispenser market and is likely to provide crucial thrust to the market’s development in the coming years. The rising disposable income of consumers in Asia Pacific has thus also aided the growth of the fuel dispenser market in the region, as it has played a key role in driving the demand for passenger vehicles from the region.

One of the key drivers for the global fuel dispenser market is the rising demand for automobiles from individuals as well as commercial institutions. The rising disposable income of consumers in developing regions has resulted in a steady rise in the demand for passenger vehicles, whereas rapid urbanization has ensured a steady demand for commercial vehicles. The automotive industry in China and India, in particular, has exhibited a steady upward trajectory in the last few years and is likely to become a major part of the global automotive market in the coming years, making their movement vital for the global fuel dispenser market.

The increasing demand for alternative fuels such as biofuels and liquid hydrogen could also have a significant impact on the global fuel dispenser market. The greater environmental viability of CNG, biofuels, and liquid hydrogen has made them the key contenders to shape the trajectory of the fuel market across the world, which could lead to large-scale changes in fuel dispenser design. The dynamics of the electric cars market also have the potential to affect the global fuel dispenser market’s growth in the coming years, as the need for widespread availability of electric charging points is a key concern for several governments across the world.

The global fuel dispenser market is segmented as follows: