Fifth wheel couplings are a cost-effective and reliable component that provide proper coupling between semi-trailers and tractors, pick-up trucks and recreational vehicles, and trucks & tankers. Fifth wheel couplings are mounted at the rear end of the vehicle, such that over the last axle of tractor, truck, and pick-up truck. Semi-trailer or trolleys are attached to the fifth wheel coupling by means of kingpin that is inserted in the fifth wheel coupling. Therefore, demand for fifth wheel couplings is rising along with the rise in demand for semi-trailers and heavy duty trucks, which is attributed to increase in trade volume due to rise in industrialization and development of road infrastructure across the globe. Moreover, implementation of government norms have led to an increase in the allowable length of medium and heavy duty vehicles in order to curb emission by enhancing vehicle load carrying capacity, which in turn is estimated to fuel the demand for semi-trucks and trailers. 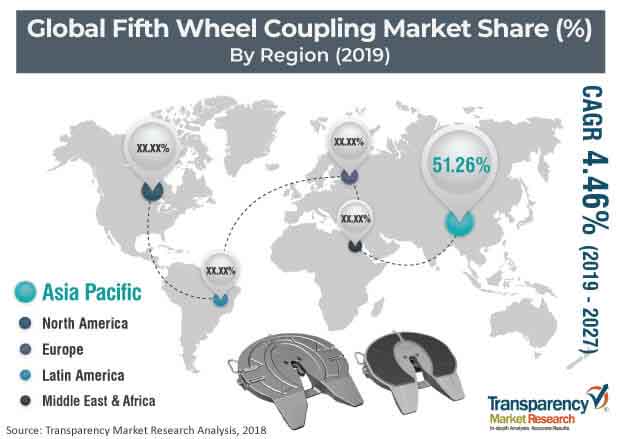 Steel is a highly preferred material to manufacture fifth wheel couplings. Steel possesses extreme corrosion and wear resistance, and is less likely to bend or deform under varying loads and force. Moreover, it is comparatively less expensive than aluminum and cast iron. Therefore, the steel segment accounted for a prominent share of the market, in terms of revenue, in 2018.

Heavy duty vehicles, long haul trucks, and road trains prefer fifth wheel couplings in order to enhance vehicle maneuverability across sharp turns & stiff roads. Demand for heavy duty vehicles, such as those having a capacity of more than 30 tons, is likely to rise significantly in the near future owing to a surge in demand for road trains. Therefore, above 30 tons capacity segments are expected to expand at a considerable CAGR between 2019 and 2027. Single pin fifth wheel couplings are capable of handling significantly higher loads and hence, are utilized in a majority of applications. Consequently, the single pin segment accounted for a notable share of the market, in terms of revenue, in 2018. Double pin fifth wheel couplings are utilized in select applications, where the loads are extremely high.

Heavy duty vehicles, such as vehicles deployed on off-road conditions, prefer fifth wheel couplings in order to handle the varying center of gravity of the trailer. Generally, medium and heavy duty trucks and tractors have a longer length as compared to conventional trucks and tractors, which poses a challenge while navigating sharp turns and bends. Governing bodies across several countries have increased the legal length of freight transporting vehicles, which is aimed at enhancing the load carrying capacity of individual vehicles. Several heavy duty truck and tractor manufacturers provide fifth wheel couplings as standard on their vehicles in order to enhance performance of their vehicles. Moreover, several consumers prefer OEM installed fifth wheel couplings, as OEMs provide proper fifth wheel couplings according to end-use application and hence, the OEM segment is projected to account for a prominent share of the market during the forecast period.

Asia Pacific accounted for major share of the global fifth wheel coupling market, in terms of revenue, in 2018, which is primarily attributed to the deployment of a large number of medium and heavy duty vehicles across China. China is the second-largest trading country globally. Therefore, a large volume of consumer and industrial goods are being transported across the country. China has a prominent automotive manufacturing industry, which demands for a reliable and faster transportation system. This fuels the demand for long haul trucks and tractor trailers, which in turn drives the demand for fifth wheel couplings. Moreover, demand for semi-trailers, road trains, and long hauling trucks is rising in several other countries across Asia Pacific, such as India, Japan, and Australia, which in turn is driving the fifth wheel coupling market across the region. Asia Pacific is followed by North America, where the demand for medium and heavy duty vehicles and long road trains has increased due to the prominent oil & gas and mining industries in the region.

The global fifth wheel coupling market has been segmented as follows: