Growing discovery of new medication classes with the objective of stopping the steep rise in worldwide prevalence has invigorated the growth of the diabetes drugs market. Growing body of research in pharmacological therapies, with focus on efficacy, safety, and patient adherence, has expanded market avenues for antidiabetic drugs.

There is always a desperate need for new drugs that can enable patients to achieve better glycemic control with least side effects. This will contribute the revenues to rise to worth of US$58.4 bn by 2025-end. In coming years, pharmaceutical and biotech companies will lay more emphasis on convenience of administration of medications and their dosing frequency. 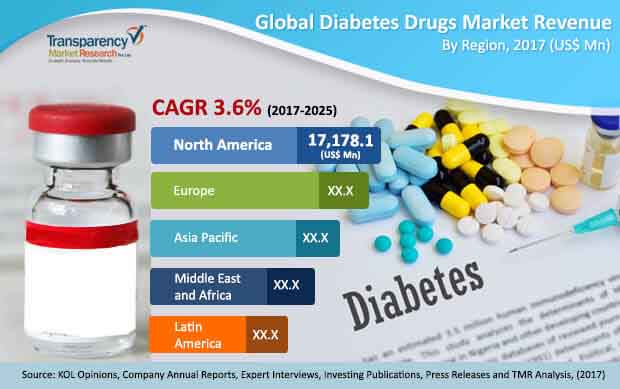 Per an estimate by the International Diabetes Foundation (IDF), the prevalence of diabetes will touch 552 million by 2030. Particularly, type 2 diabetes mellitus have over the past few years has resulted in high hospitalization costs in developed regions such as North America, with its high rate of comorbidities and complications. The high prevalence of diabetes mellitus has driven the North America to gain dominant share in 2016 in the diabetes drugs market. Particularly in the U.S., various treatment regimens have been intensely researched upon, imparting momentum to the aforementioned regional market.

The type 2 diabetes segment has in recent years has attracted groundswell of interest due to  fact that it has been leading cause of cardiovascular disorders, along with array of neurological and renal complications. Another trend that has helped the segment to contribute highest chunk of revenue is increasing pandemic of obesity in several parts of the world. Further, growing demand for diabetes drugs among adolescent patients is also bolstering the growth potential in this segment in the global diabetes drugs market. Other promising segments are gestational diabetes, impaired glucose tolerance, and impaired fasting glycaemia.

In other parts of the world, notably in Asia Pacific, relentless research in anti-diabetic medications help proponents of healthcare systems, including specialists such as endocrinologists. With the help of new classes of diabetes drugs, specialists have been able to alleviate symptoms of hyperglycaemia, a key target for diabetes management for companies in the diabetes market. They have been able to reduce the microvascular complications by expanding their drug pipelines.

On the other hand, emerging markets notably the Middle East and Africa have recently witnessed a flurry of development in healthcare systems to increase the cost effectiveness and safety of an array of anti-diabetic medications. Growing research in oral hypopglycemic medications by drug makers is unlocking lucrative avenues for drug makers. In these markets, dialectologists also have played a key role in advancing the role of diabetes drugs market.

Despite the constantly expanding assortment of antidiabetic drugs, long-term glycemic control is still elusive. Hence, some well-entrenched players have been spending dollars on developing products with remarkable safety profile, thus expanding the horizon in the diabetes drugs market. In coming years, researchers are likely to unveil diabetes drugs based on multifactorial assessment of pharmacotherapy.

Market Segmentation is as follows: