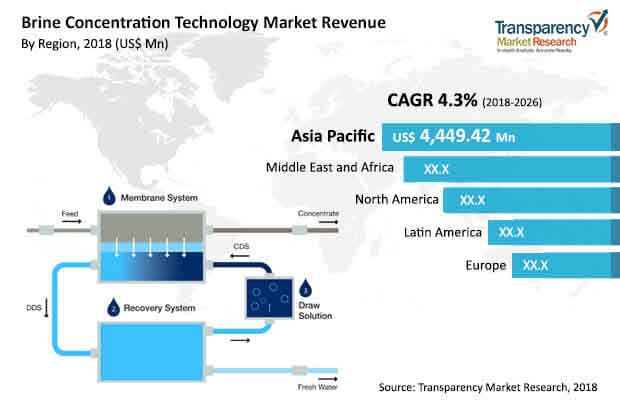 Oil & gas exploration is a major source of energy in many countries. Its production has been described as one of the most important industrial activities of the 21st century. Water is a complex mixture of organic and inorganic compounds and the largest volume of by-product generated during oil and gas recovery operations. The oilfield produced water can be a source of fresh water for water-stressed oil-producing countries. Extraction and production of oil & gas leads to reduction in reservoir pressure. Additional water is usually injected into the reservoir water layer to maintain hydraulic pressure and enhance oil recovery.

Rise in concern about environmental pollution

Increase in concern about the environment has played a major role in the adoption of brine concentration technology. Various projects, including several para-xylene chemical plants in China and a wastewater discharge pipeline for a paper mill, have been suspended or canceled as a result of public protests. Growth in concern about the environment is likely to compel industries to adopt brine treatment as a necessary solution in order to gain public acceptance. High installation cost of brine concentration technology can be a restraining factor, specifically for small industries that have lower capital investment.

In terms of technology, the vertical tube falling film (VTFF) segment currently holds the major share of the market due to the technology’s application in achieving zero liquid discharge in industries. Development of offshore oil & gas industry in North America and Middle East has propelled the demand for HERO technology. The HERO segment is likely to expand at a CAGR of 6.39% during the forecast period, followed by the VTFF segment (CAGR of 5.57%). MVC and CCD segments are also anticipated to expand during the forecast period.

In 2015, Desalitech and C2HM together emphasized on developing the Closed Circuit Desalination (CCD) technology. The CCD technology improves the efficiency and productivity. It helps in passing concentrated brine through the system continuously and leaving the salt precipitate behind through salt extraction gate. The new technology helps tackle issues arising due to depleting amount of freshwater for domestic and industrial purposes. Installation of brine concentration plants enables industries to reuse the recovered water and thus lower their operating costs.