Global Anticoagulants Market to Reach US$ 40,158.4 Mn by 2026; Rise in Prevalence of Cardiovascular and Kidney Diseases to Drive Market: Transparency Market Research

Transparency Market Research (TMR) has published a new report titled, “Anticoagulants Market - Global Industry Analysis, Size, Share, Growth, Trends, and Forecast, 2018–2026”. According to the report, the global anticoagulants market was valued at US$ 21,759.3 Mn in 2018 and is projected to expand at a CAGR of 8.0% from 2018 to 2026. Rise in prevalence of obesity, increase in hip and knee surgeries, and surge in cases of coagulation disorders are anticipated to boost the growth of the global market from 2018 to 2026. 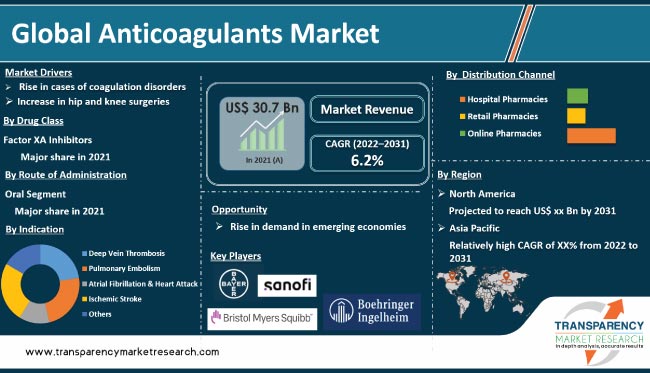 Dwindling birth rates have led to an increase in the geriatric population. In Japan, people aged 65 and above currently constitute 23% to 25% of the total population. The percentage is projected to reach 38% by 2050. In North America, the estimates are between 13% and 22% and between 16% and 27% in Europe. Rise in standard of health care facilities and availability of advanced treatment options boost life expectancy rates across the world. This in turn increases the geriatric population. According to the UN Population Division, the number of people aged 60 and above is anticipated to increase significantly during 2015–2030. In developed countries, the percentage of people aged 60 and above has increased from 12% in 1950 to 22% in 2011 and is expected to reach 32% by 2050. On the other hand, in developing countries, the percentage of people aged 60 and above increased from 6% in 1950 to 9% in 2011 and is likely to reach 20% by 2050. Aging makes people prone to fractures and injuries, as their bone density decreases, making them fragile and increasing their susceptibility to falls and arthritis-related fractures. Cardiovascular diseases, kidney disease, osteoporosis, rheumatoid arthritis, and osteoarthritis are common age-related disorders. People aged above 60 are more prone to diseases and disorders. These factors drive demand for anticoagulants products among the geriatric population.

Rise in Cases of Coagulation Disorders

The rise in adoption of Novel Oral Anticoagulants (NOACs) boosts market growth. NOACs target either factor Xa to avoid or to treat thrombosis. These show rapid action and do not require constant monitoring. NOACs also have better efficacy and safety profiles than conventional therapies such as warfarin. Therefore, adoption rate of NOACs has increased in the global anticoagulant market.

Since the introduction of anticoagulants antidotes such as idarucizumab in the market in 2015, acceptance of NOACs has increased, as these eliminate the risk of bleeding. Xarleto and Eliquis are two anticoagulants increasingly preferred by physicians. Xarleto reported a Y-o-Y growth of nearly 10% in 2015, due to increase in volume in some of the key countries such as Japan and Germany. Sales of Eliquis rose by 140.3% due to increase in demand for NOACs globally.

Rise in Prevalence of Obesity

Obesity is a key factor for the rise in the number of people suffering from kidney disorders, cardiovascular disorders, and stroke. This is also attributed to changes in lifestyle and lack of physical activity. According to CDC 2015 report, nearly 950,000 people are affected by pulmonary embolism (PE) or deep vein thrombosis (DVT). Moreover, these conditions account for 65,000 to 100,000 deaths in the U.S. each year. Additionally, more than 10% of the geriatric population of the U.S., which accounts for 25 million people, is affected by kidney diseases associated with thrombosis. This is because aging increases the risk of developing renal and cardiovascular diseases, with chances of thromboembolic and hemorrhagic events also rising. This condition is treated using anticoagulants. Increase in the number of people suffering from DVT and surge in number of surgeries are expected to drive the global anticoagulants market.

Increase in Hip and Knee Surgeries

Rise in surgical procedures such as hip and knee replacements is projected to increase the patient pool for treatment with anticoagulants in North America and Europe. According to the Centers for Disease Care and Prevention (2015), around 719,000 knee replacement and 332,000 hip replacement surgeries were performed in the U.S. in 2014. Asia Pacific is expected to be the most lucrative market for anticoagulants from 2018 to 2026. Increase in disposable income, rise in population, and expansion of key players in the region are likely to boost the growth of the anticoagulants market in Asia Pacific.