A proximity sensors is a type of sensor that is able to identify the presence of objects nearby without any personal or physical contact. A proximity sensor at times discharges a ray of electromagnetic radiation or an electromagnetic field and then looks for alterations in the return or the field. The object that is sensed is often known as the target of the proximity sensor. For instance, a photoelectric sensor or a capacity proximity sensor might be effective for a plastic target whereas an inductive proximity sensor needs metal target. On the other hand, position sensors play a pivotal role in several systems. Whether it is, injection molding machines, medical equipment, packaging machines, fly-by-wire aircraft systems, bullet trains in curvy roads, drive-by-wire cars, and so on.

Transparency Market Research (TMR) has published a new research report on global position and proximity sensors. The report presents an inclusive outlook of the global market with reference to the growth trajectory in terms of past, present, and future. The study additionally abides on facets such as drivers, restraints, and opportunities and discourses trends that are prevailing in the market. The report also offers data on the companies operating in the market and presents forwards data such as product portfolio, company profile, mergers, agreements, competitive strategies, and acquisitions, along with other facts. 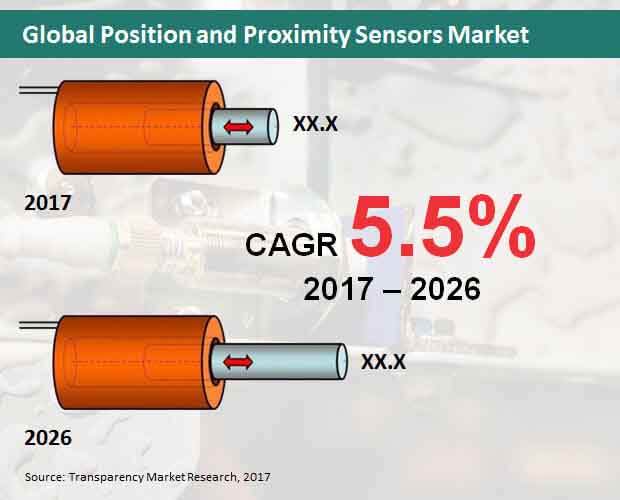 Asia Pacific except Japan to Emerge Dominant Among all Regions

On the basis of region, the global position and proximity sensors market has been segmented into North America, Europe, Asia Pacific except Japan, Japan, Latin America, and the Middle East and Africa. Among these, Asia Pacific except Japan emerged as the leading region in the global market and is expected to retain its leading position by the end of the forecast period. The region is likewise foreseen to witness a stable CAGR over the course of the forecast period because of the rising utilization of vicinity sensors for mechanical computerization in developing economies, for example, China and India. Some of the other elements driving the Asia Pacific nearness sensors advertise incorporate expanding number of small and medium manufacturers of smartphone in the region. Additionally building mechanization, food and beverages, and aerospace and defense are some other industry verticals that are progressively adopting these automated units.

Industrial Sector to Lead but Automotive to Catch up

On the basis of end users, the market has been classified into industrial, automotive, aerospace and defense, healthcare, security, transport, consumer and home appliances, IT infrastructure, energy and utility, and others. Among these, the industrial sector is expected to emerge dominant by the end of the forecast period and touch a valuation of US$2,537 Mn by 2026 end.

The entrance of cutting edge robotization advancements across different industry verticals will uphold the appropriation of these sensors underway offices. The developing reception of digitalization is changing the assembling area. The idea of the interconnected production line is acquiring foothold and is relied upon to give development freedoms to the position and proximity sensors market development.

The multiplication of Industrial Internet of Things (IIoT) combined with the developing meaning of cutting edge robotized production lines will add to the position and proximity sensors market development. The need to guarantee improved correspondence among a few resources in an office, the continuous knowledge, and investigation in the creation floor will support the consolidation of these sensors. Sensors gather the vital information and send it to the regulator consequently empowering the far off checking of the manufacturing plant. A few government activities supporting the IIoT innovation will prod the demand for cutting edge sensors, accordingly boosting this market.

Innovative progressions in the sensor business combined with the pattern of scaling down in the gadgets area will fuel the position and proximity sensors market development. Incorporated shrewd sensors are progressively utilized in scaled down chips. The advancements in the remote correspondence innovations that encourage improved information move will move the position and proximity sensors' market development. Minimal measurements and quick sign preparing in these sensors are the progressing key patterns. The progressions in the semiconductor business will likewise support the development of this market.

A new report on position and proximity sensors provides perceptive insights on the chronological growth flight of the market along with the future prospects and present scenario of the market. The report offers an exclusive analysis of the global market and also presents insights on regional and other segments.

The report offers a complete summation of the market including an official abstract that draws out the centre examples progressing in the market. It also discusses on a couple of facets, for example, drivers, obstacles, and predictions that have been found in the global market. It also acquaints readers with figures related to volume, value, and development rate of the market from a growth point of view. With reverence to market breakdown, each segment is analysed and presented in the report. It also gives an assessment in light of the market condition, and moreover presents a value chain analysis of the products and applications in concern. A year to year evolution of the market has likewise been offered in the report for the reader to be predominantly aware of the altering scenario of the market.

The report is the end result of the cautious research work of the market analysts employing reliable sources. The information introduced has been studied carefully by industry experts of TMR. The data that has been presented here has been assembled from various tried and tested sources. The figures have also been checked by the analysts and can be used to settle on key decisions and formulate strategies.

The market study conveys a structural outlook on the engaged scene of the overall Position and proximity sensors market. It features the rivalry prevalent among the present vendors in the market and also puts weight on the future circumstance of the market. The profile of the players is based on a SWOT examination sought down by company angle, product portfolio, strategies, finance related information, and year-to-year projections. The organizations have been explored minutely covering their key developments, innovations as well as mergers and acquisitions and agreements with other prominent establishments.

Why to invest in our report?

The reports made by our industry analysts are credible and have been researched and validated from several primary and secondary resources. What makes us unique is the fact that along with presenting an analysis of the market’s historical and present scenario, we also present a forecast review of the market for the benefit of our reader. The presentation is exclusive in the form of various charts, tables, and diagrams. Every bit of information present in the market research report is unique. Expert opinions are also present in the study that can be directly used by the readers to make future decisions.