The market for polyurea coatings is on an upward growth curve and the period 2018 to 2026 will witness an impressive growth rate and a higher market worth, as per Transparency Market Research. Numerous factors are lining up the market landscape, helping it chart the stellar growth curve it is anticipated to. These include growing investment, increase in infrastructure development, and notable growth in paints and coatings industry.

It therefore does not come as a surprise that over the forecast period, new opportunities of growth would be created and market players would do well to tap into these at the right time. Some of the significant developments noted in the polyurea coatings market and an overview of trends and drivers is provided below:

Polyurea coatings are derived from the reaction of isocyanate components and resin-blend. isocyanate components can be aromatic, aliphatic, polymer, or monomer. Products from the polyuria coatings have a wide ranging applications as these coatings are solvent-free and non-toxic. Their unique qualities such as temperature stability, favorable adhesion strength, high elongation, and water resistance are highly useful for crack bridging. Growing infrastructure developments in many parts of the world are expected to drive growth for the polyurea coatings market during 2018-2026. 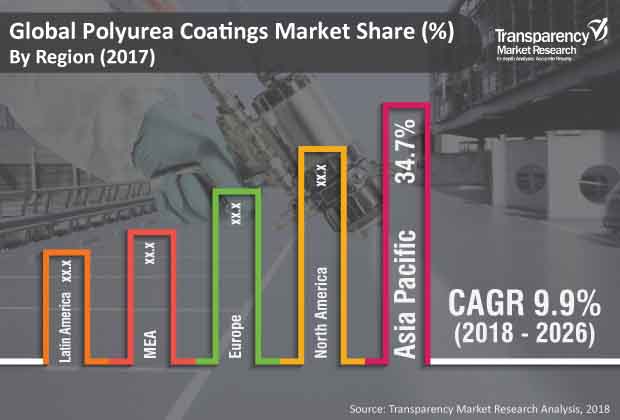 Due to growing infrastructure developments, these coatings are growing in demand. The products from the polyurea coatings marketare widely used in waterproofing concrete and for providing protection against salts, water, and chemicals. Without these coatings, chemicals can cause substration and result in significant damage to concrete structures. This critical application is a key reason for growing demand for polyurea coatings marketproducts.

Additionally, construction industry faces problems with intercoat adhesion. These are often related to low quality of raw materials, manufacturing, and spray equipment. Innovations in the machine-based coatings are proving to be effective in solving these challenges. Today, innovations in machine-base spraying can solve most problems related to poor mixing with changes in machine settings. These advancements in machine-based coatings are expected to register significant growth for the polyurea coatings marketduring the forecast period.

A competitive vendor landscape exists in this market due to the establishment of numerous players. Some main players in the polyurea coatings market include Huntsman Corporation, Albemarle Corporation, PPG Industries Inc., Nukote Coating Systems International,  Covestra AG, BASF SE, and The Sherwin-Williams Company.

The report comprises detailed value chain analysis, which provides a comprehensive view of the global polyurea coatings market. The Porter’s Five Forces model for the polyurea coatings market has also been included to help understand the competition landscape. The report also includes the analysis of various type, technology, application, and raw material segments based on their market size, growth rate, and segment attractiveness. These segments have been analyzed based on the present and future trends. Regional segmentation includes the current and future demand for polyurea coatings in North America, Europe, Asia Pacific, Latin America, and Middle East & Africa. The report also covers segmentation based on individual type, technology, application, and raw material segments of the market in all the regions.

The global polyurea coatings market has been segmented as follows: