Vaccination is one of the most cost-effective and safest ways to prevent diseases. Pneumococcus is one of the major causes of blood infection, pneumonia, sinusitis, meningitis, and otitis media. It is also a leading infectious disease. However, it can be prevented with the help of vaccination. Majority of countries have pneumococcal vaccines in their national immunization program for children aged under 1 year. Increase in pneumococcal diseases due to causative serotype drives the need for vaccines with broader coverage. Hence, demand for new pneumococcal vaccines with wider serotype coverage is rising. 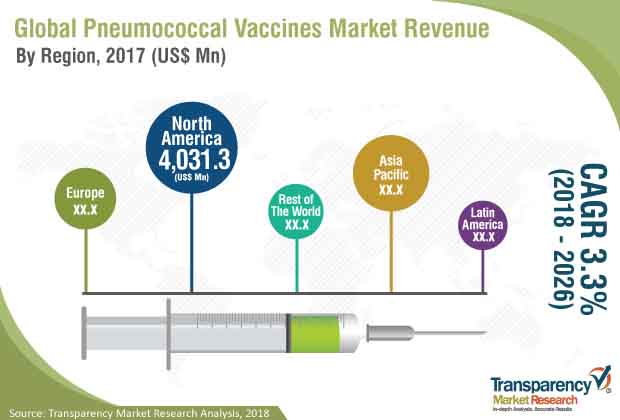 Despite the availability of antibiotic therapy against pneumococcal disease, it remains a significant cause of death among people with increased susceptibility such as the elderly and people suffering from immunosuppressive conditions or chronic illness. However, prevalence of pneumococcal disease has declined in countries that introduced pneumococcal conjugate vaccines (PCV). Meanwhile, efforts are underway to introduce pneumococcal vaccines in other countries as well. Companies also plan to introduce new and affordable PCVs, especially for the developing countries. There has also been an increase in investment in research and development to develop new vaccines at lower cost.

In terms of product type, Prevenar-13 dominated the global market in 2017, accounting for 77.3% share. Prevenar-13 is Pfizer, Inc.’s largest brand, which has been one of the most widely adopted 13-valent PCV vaccines across the world. However, higher cost of the vaccine and entry of new vaccines are projected to hamper sales from 2018 to 2026.

Based on distribution channel, the wholesalers (pharmacy channel) segment dominated the global pneumococcal vaccines market in 2017. Vaccine distribution in Europe and some countries in Asia Pacific follows a traditional pharmaceutical supply chain, and wholesalers are dominant in these countries. However, shortage of vaccines and difficulty in accessing essential vaccines in several countries have led to the entry of public authorities in the overall supply and distribution of vaccines. Hence, the wholesalers segment is expected to lose market share from 2018 to 2026. Increase in participation by regional and national governments along with non-profit organizations for availability, supply, and distribution of pneumococcal vaccines in emerging countries is anticipated to boost the growth of the public segment between 2018 and 2026.

In terms of sector, the private segment dominated the global pneumococcal vaccines market in 2017. The U.S., the U.K., Germany, and other major countries in Europe, along with emerging markets such as India are dominated by the private sector engaged in procurement, distribution, and pricing of pneumococcal vaccines. Entry of non-profit organizations such as GAVI, UNICEF, and WHO is projected to result in higher procurement of vaccines in terms of volume (doses procured) by the public sector. However, involvement of these authorities in price negotiations of sourced vaccines from manufacturers is likely to lead to lower share of the public sector in terms of revenue (US$ Mn) of the global pneumococcal vaccines market from 2018 to 2026.

In terms of region, the global pneumococcal vaccines market has been segmented into North America, Europe, Latin America, Asia Pacific, and Rest of the World. North America dominated the global market in 2017, accounting for 57.9% share owing to strong sales of Prevenar-13 in the U.S. Pneumococcal conjugated vaccine (PCV) has been part of routine vaccine immunization in Canada and the U.S. since 2000. These countries have also witnessed highly-effective results since the vaccine was introduced. Investments by government organizations and private companies have also increased for the promotion of vaccination and research & development of new vaccines. North America has also emerged as a primary center for several vaccine manufacturers. PCV is also a part of vaccination programs in countries such as the Netherlands, Germany, Slovakia, Albania, Greece, and Serbia. Increase in incidence of pneumococcal diseases in countries in APEJ also presents an opportunity for companies producing pneumococcal vaccines. Brazil is witnessing a significant increase in pneumococcal diseases. Hence, various programs are being introduced in Brazil to increase vaccine coverage.

This report analyzes the current and future scenario of the global pneumococcal vaccines market. Increase in patient population, growth of the pharmaceutical industry, rise in government investments for vaccination programs, improvement in health care infrastructure, and surge in the number of clinical trials are projected to be the major drivers of the global market during the forecast period.

The global pneumococcal vaccines market report comprises an elaborate executive summary, which includes a snapshot that provides information about various segments of the market. It also provides information and data analysis of the global market with respect to the segments based on product type, distribution channel, sector, and region. A detailed qualitative analysis of drivers and restraints of the market, and opportunities has been provided in the overview section. Additionally, the section comprises competitive matrix and company profiles along with business overview to understand the competitive landscape in the market. This section of the report also provides market share analysis by key players, thereby presenting a thorough analysis of the overall competitive scenario in the global pneumococcal vaccines market.

Based on product type, the global pneumococcal vaccines market has been segmented into Synflorix, Prevenar-13, PCV 13 (pipeline), V114 (Merck), PCV-20 (Pfizer), PCV-10 (SII), and PPSV- 23. Each of these segments is categorized into pediatric and adults. In terms of distribution channel, the global market has been classified into wholesalers (pharmacy channel), specialized companies, public authorities, and others. Based on sector, the market has been bifurcated into private and public. The market size and forecast for each of these segments have been provided for the period from 2016 to 2026, along with their respective CAGRs for the forecast period from 2018 to 2026, considering 2017 as the base year.

In terms of region, the global pneumococcal vaccines market has been segmented into North America (U.S. and Canada), Europe (U.K., Germany, France, Spain, Italy, Belgium, and Rest of Europe), Asia Pacific (India, China, Japan, Australia & New Zealand, and Rest of Asia Pacific), Latin America (Brazil, Mexico, and Rest of Latin America), and Rest of the World (Middle East and Africa). The market size and forecast for each of these regions and the mentioned countries/sub-regions have been provided for the period from 2016 to 2026, along with their respective CAGRs for the forecast period from 2018 to 2026, considering 2017 as the base year. The research study also covers the competitive scenario in these regions.

The global pneumococcal vaccines market has been segmented as below: