Physical vapor deposition (PVD) is a vacuum coating process in which the surfaces of various products such as microelectronics, cutting tools, storage devices, medical equipment, solar products, etc. are coated with materials to form a thin protective film. Manufacturers are increasingly giving preference to PVD coating over conventional coating techniques due to the environment-friendly properties of the PVD process along with other operational benefits. Furthermore, companies are adopting innovative technologies in order to differentiate their products in an increasingly competitive market scenario. 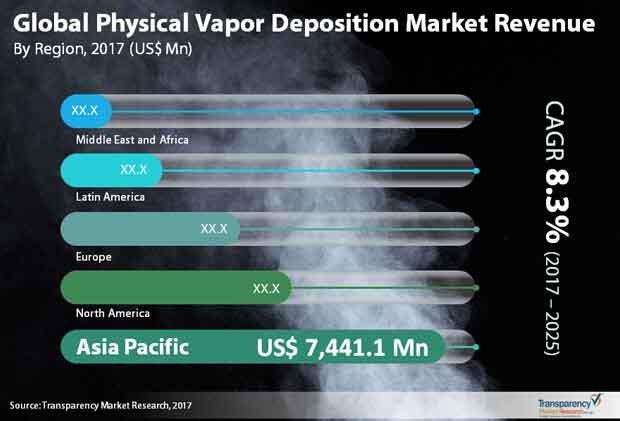 The global physical vapor deposition market can be segmented based on category, applications, and region. On the basis of category the physical vapor deposition market is segmented into PVD equipment, PVD services, and PVD materials. PVD equipment mainly comprises vacuum, heating, condensation, and coating equipment. PVD equipment dominated the global market in terms of revenue in 2016. The market revenue share of PVD equipment stood at above 50% in 2016 and is expected to experience significant growth in the coming years. PVD services include installation of equipment and coating services. Growth in end-use industries such as microelectronics and solar is projected to drive the PVD services market. PVD services is estimated to emerge as the fastest growing segment during the forecast period. PVD materials include various raw materials such as titanium, aluminum and nitrogen.

Physical vapor deposition (PVD) is a vacuum coating process in which the surfaces of various objects or metals are coated with materials to form a thin protective film. This coating exhibits higher strength, durability, and corrosion-resistant properties, as compared to conventional coating process. Expansion of cutting tool and microelectronics industry is anticipated to provide lucrative opportunity during the forecast period. PVD coatings are widely employed on cutting tools in order to provide excellent wear-resistance, advanced oxidation resistance, increased cutting speed & feed rate, etc. Furthermore, rise in demand for PVD in manufacturing of architectural glasses is also anticipated to boost the PVD market. Moreover, environment-friendly characteristics of PVD make it a preferred choice over its substitutes. Manufacturers are increasingly using PVD techniques due to the environment-friendly properties of the PVD process along with other operational benefits. However, patent protected technology along with high investment costs are likely to hamper the expansion of the global physical vapor deposition market in the near future.

This report provides detailed analysis and forecast of the physical vapor deposition market on a global and regional level from 2017 to 2025. The market has been forecast based on revenue (US$ Mn) from 2017 to 2025, considering 2016 as the base year. The report includes drivers and restraints coupled with their impact on the market growth during the forecast period. Furthermore, the study encompasses various opportunities for growth of the market at the global and regional and country level.

The report thoroughly analyzes the value chain to provide detailed understanding of the market. Additionally, it covers Porter’s Five Forces Model, which offers an insight into the intensity of competition in the market. The study also comprises market attractiveness analysis, wherein various types are benchmarked based on their market size, growth rate, and general attractiveness.