Prevalence of rheumatoid arthritis has witnessed a surge, resulting into an increasing demand for orthopedic procedures. With increasing awareness about health, the elderly cohort is leading more active lifestyles across the globe, particularly in developed regions, which in turn has led toward more stress and joint injuries. These factors have driven the demand for various orthopedic implants such as the digit implants. Orthopedic digit implants find widespread application in areas such as oncology, and traumatology. With increasing preference for minimally invasive surgeries to treat orthopedic diseases, and rapidly penetration of 3D printing technology in orthopedics, potential opportunities will be created for the market expansion in the foreseeable future. 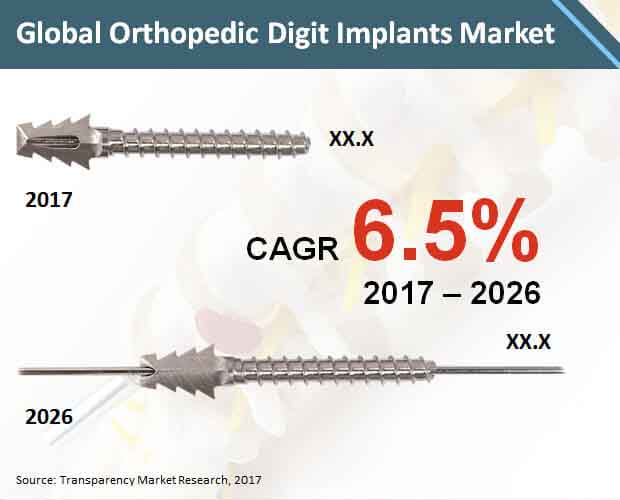 However, stringent regulatory approval procedures, and limited medical insurance coverage are likely to impede adoption of orthopedic digit implants. In addition, hypersensitivity, implant dislocation, post-surgery infections, and toxicity are major concerns among patients which might hinder growth of the market. A new report by Transparency Market Research (TMR) projects the global orthopedic digit implant market to reflect an impressive expansion over the forecast period (2017-2026). Global sales of orthopedic implants are estimated to exceed US$ 100 Mn by 2026-end.

Latin America is projected to be the fastest expanding market for orthopedic digit implants by 2026-end. However, revenues from the market in Latin America will remain comparatively lower than those from North America, Europe and Asia-Pacific excluding Japan (APEJ). Projected to exhibit an impressive expansion through 2026, North America will remain the most lucrative market for orthopedic digit implants, in terms of revenues. Between Europe and APEJ, the former will account for a comparatively larger market revenue share, while the latter will register a relatively faster expansion in the market during the forecast period.

Sales of Silicon Pyrocarbon to Exhibit Highest CAGR through 2026

Based on material, Nitinol is anticipated to remain sought-after among manufacturers of orthopedic digit implants, with sales estimated to reach nearly US$ 90 Mn by 2026-end. Silicon pyrocarbon will account for the smallest revenue share of the market, however their sales are projected to exhibit the highest CAGR through 2026. Revenues from sales of titanium for manufacturing orthopedic digit implants will remain relatively larger than those from silicon pyrocarbon over the forecast period.

The report encompasses imperative factors propelling the market expansion, untapped opportunities for key market participants, and trends & developments molding the market dynamics. A scrutinized analysis is done on the sizing of the market across its various segments for the historical period 2012 to 2016. Analytical tools have been utilized for reaching at most significant projections on future of the market for the assessment period 2017 to 2026.

The beginning chapter of the report offers an executive summary of the global orthopedic digit implants market, followed by a chapter offering the market’s overview. A brief market introduction, along with the definition of “orthopedic digit implants” has been provided in the overview. The executive summary delivered is comprehensive yet concise. This chapter delivers all necessary information related to the market in a simplified format. Market size estimations given in the report have been interpreted via metrics such as the year-on-year expansion rates, compound annual growth rates, basis point share indexes, and absolute dollar opportunities.

Information associated with the market dynamics, distribution network, and technology roadmap has also been provided in the report. An intensity map included in the report plots presence of the market participants across the regional segments. The report also delivers an insightful analysis on the competitive landscape of global orthopedic digit implants market. The market participants identified by the report are analyzed on the basis of their current market scenario, strategic partnerships, and key developments.

The report includes a weighted chapter on the market’s competitive landscape, where key market players have been studied in detail. Information about prominent players in the market have been delivered in terms of company overview, key financials, product overview, key developments, and SWOT analysis. Information about novel strategies employed by the market players is provided in this chapter, which helps in increasing their portfolios, leveraging M&A for business expansion, making strategic alliances, and developing marketing strategies.

Analysts at TMR have used a robust research methodology, where exhaustive primary interviews, which are conducted with the domain experts and key industry stakeholders, are combined with an in-depth secondary research employed for harnessing essential information & data related to the market. Healthcare industry partakers manufacturing orthopedic digit implants have been contacted & interviewed to gain information about their profitability index, revenue procurements, and net spending in last five years. Various tools are utilized for validating gathered data for attaining relevant market insights that are likely to significantly influence critical business decisions. The report represents key findings and insights on the market in a systematic manner.