In addition, the rising demand from the consumer electronics segment is expected to be a chief market driver. Therefore in response to the proliferation of smart televisions and smartphones, growth witnessed in the global next generation processor market will stimulate. On the downside, the high cost of raw materials will hinder its trajectory to an extent. Existing issues of software integration will also create troubles for the market. Nevertheless, with the increasing research and development activities, these concerns are soon likely to get mitigated thus bolstering growth opportunities. 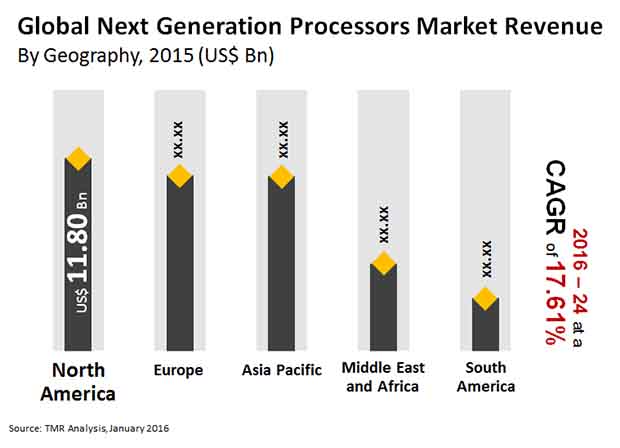 Demand for Automation in Consumer Electronics to Boost Growth

In terms of volume, the automotive segment will hold significant market share owing to the increasing demand for intelligent cars rises that use sensors and automotive braking systems. Spurred by these factors, the global next generation processors market is likely to report robust growth.

Some of the leading players operating in the market are Intel Corporation (US), Advanced Micro Devices Inc. (U.S.), VIA Technologies Inc. (Taiwan), Fujitsu Ltd (Japan), and Acer Group (Taiwan) among others.

The report also provides assessment of different drivers that is impacting the global market, along with the restraints and opportunities that have also been covered under the scope of this report. All these factors helps in determining different trends that has been impacting the overall market growth. Moreover, after taking into consideration all this factors, an extensive analysis of the region wise growth parameters of next generation processor market along with the overall assessment for the forecast period of 2016-2024 has been also been provided within this report.

One of the important driving factors of this market is the growing market share of consumer electronics. Smartphones, smart televisions and various other smart electronic gadgets require these high-end processors and thus, stimulate growth prospect of this market. Technically advanced and highly industrialized nations such as Japan, Germany, the U.S.A, the U.K etc. have emphasized on smart manufacturing since the last decade thereby driving this market. Furthermore, growing automation of the automotive segment in these developed nations have been largely responsible for the increasing demand of next generation processors in these countries. Emphasis on smart manufacturing

Some of the leading players operating in the market are Intel Corporation (US), Advanced Micro Devices Inc. (the U.S), VIA Technologies Inc. (Taiwan), Fujitsu Ltd (Japan), Acer Group (Taiwan) among others.

The global next generation processors device market has been segmented into: