Set to grow at an impressive pace of a double digit compound annual growth rate over the forecast period of 2015 to 2023, the global nanocellulose market is on its way to a higher valuation. One of the biggest attribute that goes in favor of this market is the superior properties of the products. Additionally, it is quite important to note here that its increasing adoption in flexible packaging aids is also contributing to growth in the market.

As per Transparency Market Research, the sturdy growth curve that would be noted over the forecast period would lead the market to a host of new growth opportunities. And, demand from pharmaceuticals and cosmetics would be major contributor of growth in the market.

A glimpse into notable developments shaping the market landscape and into trends and drivers that are helping the market stay on an upward facing growth curve is provided below:

Nanocellulose is a lightweight material obtained from wood pulp or plant cellulose. The term generally refers to cellulose derived nanofibrils that can be long ribbon-like, short rod-shaped or thread-shaped. Nanocellulose is obtained through mechanical or chemical treatment of cellulose, a biopolymer material abundantly available across the globe. Nanocellulose offers immense growth potential owing to its superior mechanical, thermal, rheological, and structural properties vis-à-vis other cellulose-based derivatives and nanomaterials. Unique properties of nanocellulose include high aspect ratio, biodegradability, high strength, and low density. Nanocellulose can be employed in virtually every field. It can be used as rheological modifier in oilfield chemicals and oxygen barrier in packaging films.

Extensive support and funding from governments and organizations is primarily driving the nanocellulose market. Countries such as the U.S., Canada, Japan, Sweden, and Finland have been increasingly supporting the development of nanocellulose. Nanocellulose has the ability to lower carbon footprint, as it is a product of renewable sources. Despite its significant potential, factors such as scaling up issues, high energy consumption, lack of consumer awareness, and lack of product standardization and quality are expected to hamper market growth in the next few years. Nanocellulose is likely to provide numerous opportunities in flexible electronic displays, pharmaceutical formulations, and non-woven products and tissues.

In terms of volume, North America is projected to exhibit the fastest growth rate in the nanocellulose market during the forecast period. Technological advancements and governmental support have been the key factors driving the nanocellulose market in the region. Europe accounted for the second-largest share of the global nanocellulose market in 2014. Market penetration in regions such as Asia Pacific, Latin America, and Middle East & Africa is low as compared to North America and Europe due to lack of product awareness and technological issues. However, this scenario is likely to change in the near future. 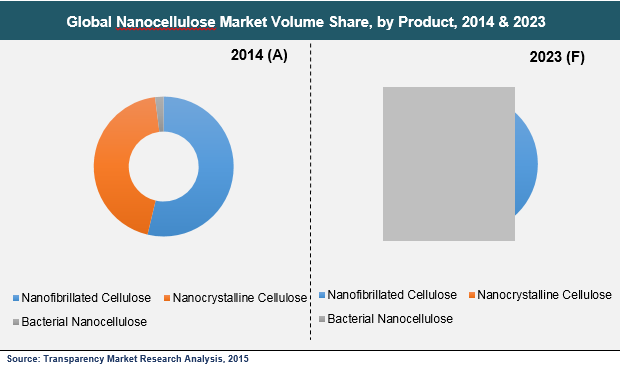