The industrial sphere has witnessed significant developments in past two decades wherein the consumption of fossil fuels, including oil, natural gas, and coal has risen exponentially. However, the increase in the consumption of these fuels has led to significant environmental degradation due to the high amounts of CO2 released in the atmosphere. Despite considerable efforts being made to minimize CO2 emissions, it continues to pose a constant challenge in several countries worldwide. Within the N-MDEA market, stakeholders are focusing on restricting the environmental impact of gas treatment processes by investing in research and development.

Gas treatment technologies have evolved at a rapid pace and at present, natural gas has garnered the reputation of being one of the cleanest fossil fuels. However, liquid scavenging is required to eliminate impurities, including H2S and CO2. Typically, alkanolamines such as N-MDEA are extensively used in the regenerative H2S removal processes, which, in turn, has increased the demand for N-MDEA across the world. In the current scenario, N-MDEA is widely used across a range of industry verticals such as oil & gas, textile, paints & coatings, and medical. Growing applications of N-MDEA in these end-use industries are expected to drive the N-MDEA market, which is expected to reach a value of ~US$ 1 Bn by 2027. 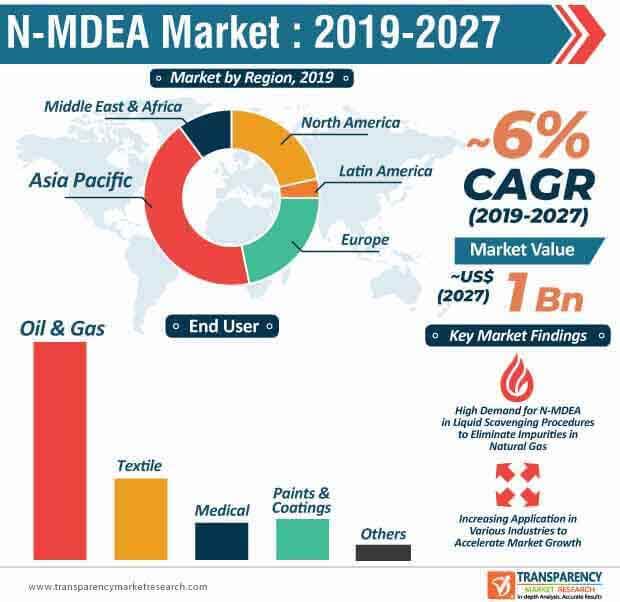 The demand and consumption of natural gas in different industrial verticals is witnessing a steady growth worldwide, catering to ~23% world energy requirement in 2017. The growing adoption of natural gas can be attributed to its economic benefits and energy-efficiency in comparison with crude oil. Methane is an integral component of natural gas. However, it constitutes several impurities, including acid gases and other hydrocarbons. These impurities hamper the gas energy value and also lead to significant corrosion in the pipeline. It is thus, imperative to eliminate these impurities, and liquid scavenging procedures with N-MDEA are employed for the regenerative removal of H2S.

The ascending demand for N-MDEA within the oil & gas sector is likely to provide an impetus for growth of the N-MDEA market during the forecast period (2019-2027). The oil & gas sector is projected to account for ~55% share of the N-MDEA market by 2027, with an estimated volume consumption of ~252-kilo tons. Despite the growing demand for N-MDEA from other industrial sectors, including textile and medical, oil & gas industries will remain the most prominent end user during the assessment period.

The energy-intensive process accounts for ~60-70% of the overall operating costs in acid gas removal systems. In their quest to address this problem of high regeneration consumption, several attempts were made to minimize energy consumption and improve the overall performance of sour gas loading. Thus, companies within the oil & gas sector are leaning toward other alternatives, including co-process produced water as an efficient way to minimize costs. The growing adoption of these alternatives is likely to hinder the demand for N-MDEA, which, in turn, could affect the expansion of the N-MDEA market in the near future. However, research and development activities will continue to drive the N-MDEA market during the forecast period. 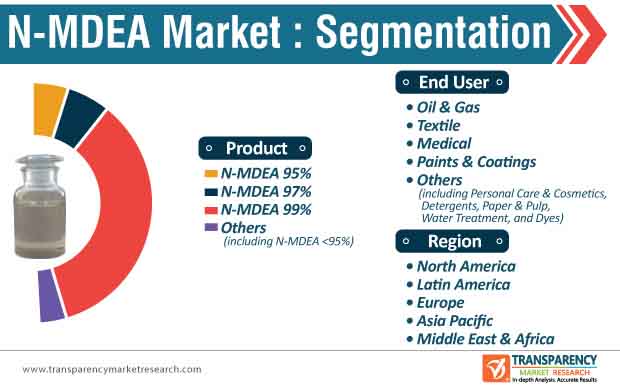 Looking for Regional Analysis or Competitive Landscape in N-MDEA Market , ask for a customized report

The N-MDEA market is expected to grow at a CAGR of ~6% during the forecast period. The ascending demand from the oil & gas sector will play an imperative role in driving the growth of the N-MDEA market in the near future. Research and development activities will gain significant momentum, as stakeholders continue to strive to reduce environmental footprint. Market players in the N-MDEA market should primarily focus on improving the energy efficiency of operations that utilize N-MDEA. Stakeholders should also consider mergers and acquisitions in Asia Pacific and MEA to improve their position in the current market landscape. The Asia Pacific region will continue to be the most prominent N-MDEA market, owing to India and China being two of the largest producers and consumers of N-MDEA.

​These companies actively engage in expansions, mergers & acquisitions, and joint ventures in order to maintain their share in the global N-MDEA market.

N-MDEA Market - Scope of the Report

The latest study collated and published by Transparency Market Research (TMR) analyzes the historical and present-day scenario of the global N-MDEA market to accurately gauge its potential future development. The study presents detailed information about the important growth factors, restraints, and key trends that are creating the landscape for the future growth of the N-MDEA market to identify the opportunistic avenues of the business potential for stakeholders. The report also provides insightful information about how the N-MDEA market will progress during the forecast period of 2019 to 2027.

This study covers a detailed segmentation of the N-MDEA market, along with key information and a competitive outlook. The report mentions the company profiles of key players that are currently dominating the N-MDEA market, wherein various development, expansion, and winning strategies practiced and executed by leading players have been presented in detail.

The report provides detailed information about the N-MDEA market on the basis of comprehensive research on various factors that are playing a key role in accelerating the growth potential of the market. Information mentioned in the report answers path-breaking questions for companies that are currently functioning in the market and are looking for innovative ways to create a unique benchmark in the N-MDEA industry so as to help them make successful strategies and take target-driven decisions.

The research methodology adopted by analysts for combining the N-MDEA market report is based on detailed primary as well as secondary research. With the help of in-depth insights of the industry-affiliated information that is obtained and legitimated by market-admissible resources, analysts have offered riveting observations and authentic forecasts of the N-MDEA market.

During the primary research phase, analysts interviewed industry stakeholders, investors, brand managers, vice presidents, and sales and marketing managers. Based on data obtained through the interviews of genuine resources, analysts have emphasized the changing scenario of the N-MDEA market.

TMR’s research study assesses the N-MDEA market on the basis of product, end use, and region. This report presents extensive market dynamics and progressive trends associated with different segments, and how they are influencing the growth prospects of the N-MDEA market.