Multi-factor authentication can be considered to be an emerging sector of the identity access management and may utilize many-fold methods of authentication to verify a user’s identity. Authenticating user identity ensures security during online transactions, while logging into online services, and accessing corporate resources. Credentials that have been compromised are the key cause resulting breach of data. Multi-factor authentication is thus utilized by enterprises in order to administer an extra security layer that makes users to authenticate via knowledge, possession, and inherence factors to gain access to corporate and social networks. 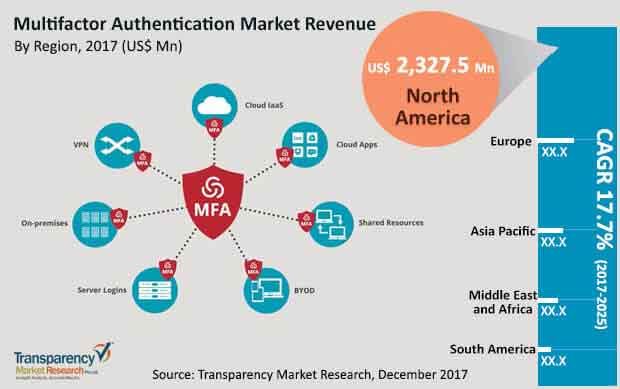 On the basis of the end-user industry segment, the multi-factor authentication market has been divided into BFSI, government, healthcare, retail, defense, telecom & IT, and others. Among all the sectors, BFSI is expected to show a significant market revenue share for the forecast period. This higher market revenue share is attributed to the increasing number of cyber-attacks on financial institutions.

North America is expected to have the highest market revenue share. The growth in the North American region is majorly due to the countries such as United States and Canada. Furthermore, many companies from the multi-factor authentication market are significantly focusing on strategic mergers and acquisitions for deeper geographical penetration.

The increasing need for identity authentication has become a vital part of security in almost all industrial and commercial sector. Multifactor authentication is currently emerging and is likely to come up with more innovations in the field of identity access management. Such services are now considered an essential process for verifying the identity of the user especially during online services or online transactions or for accessing the resources in a corporate environment. Accreditations that have been undermined are the key reason required to gain access to information. Multifaceted authentication is hence used by undertakings to manage an additional security layer that makes clients to confirm through information, ownership, and inherence components to access corporate and interpersonal organizations.

North America is anticipated to have the most noteworthy market income share. The development in the North American area is significantly because of the nations like United States and Canada. Moreover, numerous organizations from the multifaceted authentication market are fundamentally zeroing in on essential consolidations and acquisitions for more profound topographical entrance.

This report on the global multifactor authentication market provides analysis for the period 2015–2025, wherein 2016 is the base year and the period from 2017 to 2025 is the forecast period. Data for 2015 has been included to provide historical information. The report covers market dynamics including drivers, restraints, opportunities, and trends expected to influence the global multifactor authentication market growth during the said period. Technologies that are playing a major role in driving the global multifactor authentication market have also been considered in the study. The study provides a comprehensive analysis of the market growth throughout the above forecast period in terms of revenue estimates (in US$ Mn), across different geographies.

Segment trends and regional trends have also been added in multifactor authentication study. Additionally, the report also covers segment wise comparison matrix, market attractiveness analysis and market positioning of key players for all regions covered in the scope of study.

Furthermore, the report includes competition landscape which comprises competition matrix, market positioning of major players in the multifactor authentication market based on their 2016 revenues, and profiles of major players. Competition matrix benchmarks leading players on the basis of their capabilities and potential to grow. Factors including market position, offerings and R&D focus are attributed to company’s capabilities. Factors including top line growth, market share, segment growth, infrastructure facilities and future outlook are attributed to company’s potential to grow. This section also identifies and includes various recent developments carried out by the leading players of multifactor authentication market.