The microgrid-as-a-service (also known as MaaS) model is marking prodigious growth, which is highly propelled by its economic benefits over traditional models. The underperformance of traditional grids with legacy infrastructures is a key success factor driving governments of numerous countries to undertake initiatives to encourage the deployment of the MaaS model, thereby propelling growth of the microgrid-as-a-service market. The U.S. Department of Energy has come forward with the Smart Grid Investment Grant (SGIG) program to accelerate the gait of the shift from traditional electric transmission systems to modernized systems, with grants from governments.

Profitable opportunities await for players of the microgrid-as-a-service market, as rural electrification projects ongoing in numerous countries of Asia Pacific and the Middle East & Africa are projected to upkeep the adoption rate. On top of that, the demand for electricity during exigencies, ascending from hospitals and the defense sector, is projected to drive the demand for microgrid. However, the inadequacy of skilled labor, on account of lack of proper training programs, is likely to affect the scalability of the MaaS market. 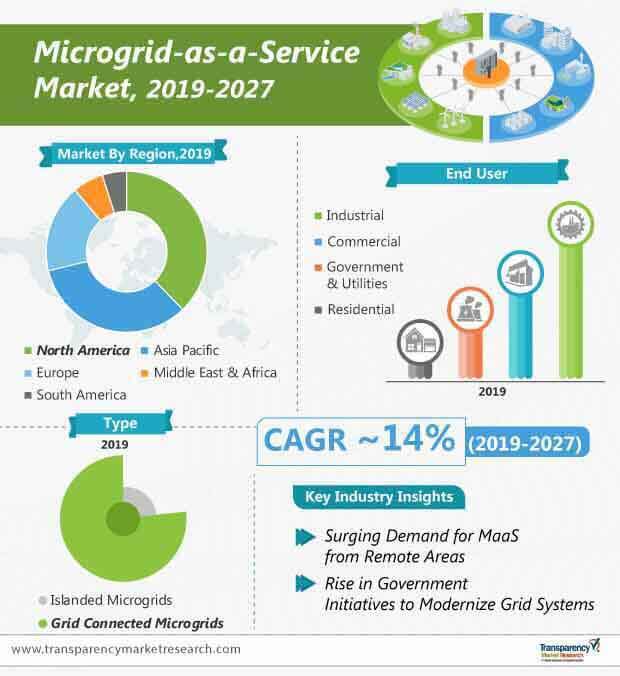 Technology to Lead the Future Course of the MaaS Market

Numerous technological advancements have been being directed towards improving the performance of battery invertors for ensuring uninterrupted power supply through a microgrid. Manufacturers operating in the microgrid-as-a-service market are looking at the development of battery technology with higher power outputs to further penetrate their models deeper into end-user segments. Initiatives such as the Clean Power Plan (CPP) policy, intended towards shrinking carbon footprints, are paving the way for the development of renewable energy through bio power, wind, and solar energy.

With the advent of wireless and IoT technologies, the performance of microgrids can be optimized by real-time data streaming, processing, storage, and monitoring infrastructure, which eliminates any human intervention. Manufacturers also leverage the prowess of MaaS to reduce the reliance on long-distance distribution lines, thereby reducing transmission losses. The convergence of Blockchain technology and MaaS will further build trust in the transaction landscape. The integration of this technology with microgrids will assist market players in managing payments in a convenient and secure fashion.

Since the time of its inception, the microgrid-as-a-service model has been deemed complex. The intricate planning and designing of microgrids coupled with the integration of sensors, controllers, resolvers, and encoders, together, further increases the complexity of the system. The deployment of such a complex system requires a skilled workforce; however, the insufficient number of professionals could impact the adoption rate in the long run. Besides this, the presence of stringent government regulations regarding microgrids and the escalating adoption rate of individually-owned microgrids are projected to deter the impressive pace of the microgrid-as-a-service market. The MaaS market has a low threat of new entrants, on account of two key aspects: high upfront CAPEX and OPEX requirement, and mandatory conformity to government standards 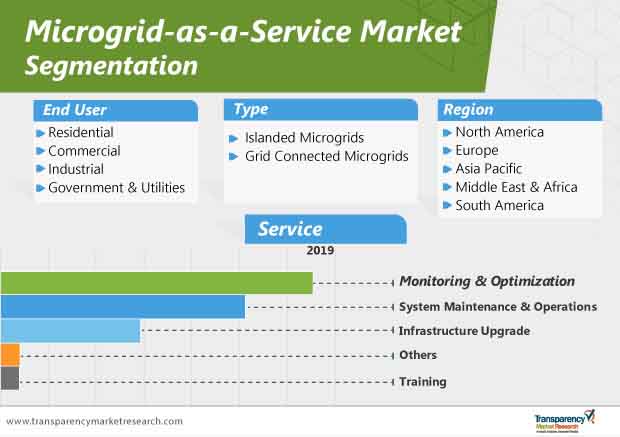 Stuck in a neck-to-neck competition with other brands? Request a custom report on “Microgrid-as-a-Service Market”

Authors of the report have an optimistic perspective regarding the growth of the microgrid-as-a-service market. As per the research, there is involvement of a very few players, meaning, moderate competition in the landscape. Analysts recommend that, manufacturers can devise business strategies based on product innovation and the technological upgrade of microgrids. In addition, since the industry faces the 'shortage of workforce' dilemma, manufacturers can organize training sessions aimed at increasing the proficiency of their workers, which can also serve as an opportunity to build long-term customer relations.

An example of a customer-centric approach can be derived from METCO Engineering Inc. The company offers end-to-end services, and manages energy performance contracts. In May 2018, the company entered into a strategic agreement with Duro Felguera SA to collaborate on energy efficiency and resilience projects in the U.S.

In a nutshell, significant investments made towards innovating service-based solutions can build a smooth road to market consolidation for manufacturers.

In April 2016, Tech Mahindra Limited signed two strategic long-term agreements to strengthen offerings under its microgrid-as-a-service segment in Canada and India. The first MoU (Memorandum of Understanding) was signed with the Center of Urban Energy (CUE), a part of Ryerson University, Toronto, and the second one was signed with Himachal Pradesh State Electricity Board (HPSEB) and Advanced Energy Center (AEC). In November 2016, Green Energy Corp. announced its collaboration with Xtensible Solutions, LLC, which is a prominent player that provides the utility industry with high standard-based systems integration and information management solutions. As per this collaboration, both companies would be implementing the Open Field Message Bus (OpenFMB) standard. In April 2019, Rolls-Royce Power Systems announced that it would be signing a partnership contract with ABB for the supply of advanced automation and microgrid technology. As a part of this partnership, the two companies are planning to develop an energy-efficient microgrid solution for players in the commercial and industrial sectors.

Traditional power grid systems produce a high level of carbon dioxide, which is approximately 33% of the carbon produced. Industries and governments are focusing on reducing carbon production. As the industry is shifting toward digitization, microgrid controllers are gaining popularity. While microgrids require a large amount of electricity, digitization also creates new streamlined methods to manage energy. Microgrid-as-a-service allows the system to island seamlessly away from the central grid at the time of power outage, and back again when the central grid re-energizes, which results in improved operational efficiency. This technology is expected to play a key role in industry de-carbonization. More than 420 major corporations are committed toward the cutting down of greenhouse gas emissions (GHGs). These factors are expected to drive the global microgrid-as-service market during the forecast period.

Traditional grids are highly expensive, and they cannot provide energy security, clean energy integration, and economic benefits. Hence, end users are shifting toward microgrids. Initiatives taken by regional and international governments in the field of microgrids is a major factor expected to drive the global microgrid-as-a-service market from 2019 to 2027. Governments are continuously encouraging the deployment and development of microgrids. According to India Energy Storage Alliance (IESA), by 2016, India has installed over 2,000 AC microgrids of over 5 kW, and over 10,000 DC microgrids, with a majority of them sized at less than 1 kW. The Ministry of New and Renewable Energy (MNRE) of the Government of India calls for 500 MW of installations by energy service companies (ESCOs). The Central Government, state governments, and corporate companies would be raising the funding for these installations. The U.S. Department of Energy has taken an initiative called 'Smart Grid Investment Grant (SGIG)' program in order to speed up the modernization of the country’s electric transmission and distribution systems. Under the Energy Independence and Security Act (EISA), the U.S. Government has raised funding of US$ 4.5 Bn to jump-start the SGIG (Smart Grid Investment Grant) project. If industry expenditure is included, the Smart Grid Investment Grant program represents an investment of US$ 8 Bn, which would be utilized to empower the country’s electricity distribution system. The above-mentioned initiatives taken by governments are likely to augment the global microgrid-as-a-service market in the near future.

Microgrid-as-a-Service Market: Scope of the Report

Key indicators of market growth, which include value chain analysis, supply chain analysis, and compounded annual growth rate (CAGR), are elucidated in TMR’s study in a comprehensive manner. This data can help readers interpret the quantitative growth aspects of the global microgrid-as-a-service market during the forecast period.

Microgrid As A Service Market