Matting agents help achieve a low-gloss and a low-sheen finish on the surface to which the paints and coatings formulations containing matting agents are applied. It provides the surface with a matt finish, while maintaining the soft feel of the surface. Matting agents are of three type viz. Silica, Thermoplastic, and Wax-based. Currently, silica matting agents are preferred more over the other two counter parts. Based on technology, the matting agents markets can be categorized into water-based, solvent-based and other technologies. Achieving a matt-finish appearance is a matter of choice of end-users of the products, in which the matting agent formulations are utilized. Currently, the market for paints and coatings providing a low-gloss matt finish is small, as compared to the paints and coatings providing a gloss finish. The preference of end-users, especially in the consumer markets such as the automotive industry, is more towards gloss finish. Nonetheless, the market for paints & coatings providing low-gloss matt finish is expanding at a moderate growth rate. Consequently, the matting agents market is expanding at a moderate growth rate. Asia Pacific is anticipated to dominate the market during the forecast period, followed by Europe and North America 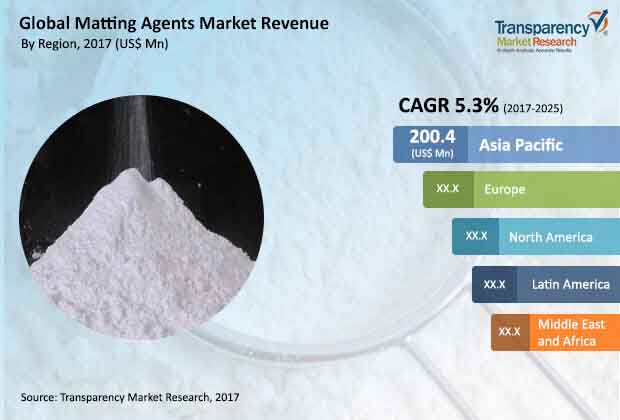 The customer preference is marginally shifting toward low-sheen, low-gloss, matt finish products, due to the increasing awareness of the benefits of low-glare properties. Low-gloss surfaces prove to be less disturbing, especially in the larger spaces. The changing customer preference towards matt finish, and the expansion of end-user industries such as automotive and construction are anticipated to fuel the demand for matting agents in various coatings formulations, especially the wood and coil coating formulations. Industrial coatings is a major application segment of the matting agents. Demand for matting agents in the industrial coatings segment has been increasing owing to the requirement of low-gloss finish and anti-glare properties in industrial applications where high-gloss finish acts as disturbance for workers working in the area. Especially, on the shop floors in factories, where a lot of machine work is involved, a low-gloss finish is preferred. Furthermore, matting agents improve the slip, scuff, and rub resistance in architectural coatings, which are highly desirable in architectural coatings. Thus, the demand for matting agents in industrial and architectural coatings segments is rising consistently, in order to improve the surface properties and achieve the desired finish on the surface of the products, on which the coatings containing matting agents are applied.

Diatomaceous earth, a naturally occurring mineral is gaining importance as the base material for matting agents. Usage of diatomaceous earth in the paints & coatings formulations helps reduce the overall cost of the formulation. It also helps replace the concentration of synthetic silica by 30%. Use of diatomaceous earth for producing matting agents helps the producers develop a low cost eco-friendly alternative to its counter parts. This technology provides a good opportunity for existing as well as new players who are willing to enter the market, penetrate the highly organized matting agent market, which is currently dominated by a few prominent players in the industry.

In May, 2017, the leather business unit of Lanxess, a specialty chemicals company, announced the inclusion of a new matting agent, Opti-Matt AD-20, in its product portfolio. The agent has been designed and developed by The Dow Chemicals Company. In March 2017, The Lubrizol Corporation announced the availability of its new additive technology for usage in powder coatings, which provides with uniform matting. PowerAdd 9553 is a product developed by the company, which is a post-addition matting additive, which is utilized to turn glossy powders into matted powders. Innovations in technology, and product at regular intervals is an indication of the steadily growing market for matting agents.

Silica matting agents, Water based, and wood coatings anticipated to be the dominant segments during the forecast period

Increasing use of matting agents for industrial and architectural coatings is one of the factors for anticipated increase in the demand for matting agents. Also, the growing awareness about benefits of low-glare, matt finish is anticipated to drive the demand for matting agents during the forecast period. Due, to several environmental considerations, the regulatory authorities and the market players are emphasizing more on use of water-based technologies, in order to have less volatile organic compound emissions. Water-based technologies are anticipated to witness an increase in its market share by 2025.

The report includes detailed value chain analysis, which provides a comprehensive view of the global matting agents market. Porter’s Five Forces model for the matting agents market has also been included to help understand the competitive landscape in the market. The study encompasses market attractiveness analysis, where in products, and application are benchmarked based on their market size, growth rate, and general attractiveness.

The study provides a decisive view of the global matting agents market by segmenting it in terms of product type, technology, and application. In terms of product, matting agents are classified as silica, thermoplastic, and wax-based. Based on technology, the matting agents market has been classified into water-based, solvent-based, and other technologies. In terms of application, it is segmented into industrial coatings, wood coatings, leather coatings, and architectural coatings. These segments have been analyzed based on present and future trends. Regional segmentation includes current and forecast demand for matting agents in North America, Europe, Asia Pacific, Latin America, and Middle East & Africa.

The global Matting Agents market has been segmented as follows: