The bottom of the world's ocean contains a large amount of reserves of precious metals and other resources. Seabed mining has the potential to meet the demand for various minerals that are used across the globe. Mining could take place in a country’s own exclusive economic zone or on the seafloor under international waters, where the International Seabed Authority mandates that a portion of all mining profits should be given to developing nations. 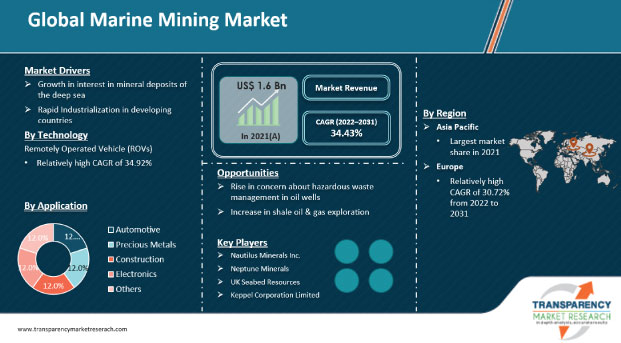 Currently, the global demand for copper stands at around 24 million metric tons. Majority of copper is used in electrical and electronic products, construction materials, and traditional transportation equipment. Metals such as zinc and manganese and rare earth materials such as cobalt are used in high-tech devices (from cell phones to computers). Advanced technologies are being adopted increasingly across the globe. This is expected to boost the demand for these materials in the near future. Supply of these materials on land is relatively limited.

Manufacturing and service industries have been expanding in developing countries such as India, China, Japan, Vietnam, Indonesia, and Brazil since the last few years. Construction and shipbuilding industries in Asia Pacific have been expanding at a rapid pace due to the significant increase in number of projects. This is anticipated to propel the demand for metals and minerals.

Increase in disposable income and rise in demand for durable goods such as automobiles and household equipment with high mineral or metal content are estimated to fuel the market. Furthermore, several international developers plan to set up their businesses in emerging economies through FDI incentive schemes. This is estimated to indirectly boost the economies of countries and industrialization. Rise in industrialization is projected to propel the marine mining market, primarily due to the increase in demand for metal products.

Mining on land creates environmental concerns, while there are multiple additional potential environmental issues with marine mining. Physical disturbance and destruction of habitat and fauna are key concerns that can adversely impact marine eco-systems. Areas with polymetallic nodules are natural habitats for fauna, which are susceptible to damage from mining activities. Modification of natural waves is a concern. Potential for pollution from spills from vessels and other infrastructure involved in deep sea mining processes is also a concern. Presence of such environmental issues is likely to hamper the market during the forecast period.

Introduction of Internet of Things (IoT) Solutions in Mining

In March 2018, Nautilus Minerals Inc. announced it had launched its production support vessel at the Mawei shipyard in China. The vessel is expected to be used by Nautilus Minerals Inc. and its partner, Eda Kopa Limited, at the Solwara 1 Project site in the Bismarck Sea of Papua New Guinea. In February 2018, Nautilus Minerals Inc. announced that the Government of Papua New Guinea granted a two-year exploration license to the company. The license is expected to allow the company to conduct exploration activities in the southeast Bismarck Sea. The Exploration License EL2537 covers 2,558 sq.km, and includes the same prospective geology that hosts Nautilus’ Solwara 1 deposit. In May 2017, Nautilus Minerals Inc. announced that the company’s Launch and Recovery System (LARS) equipment, which was built by AxTech on behalf of Soil Machine Dynamics, had arrived at the Mawei shipyard in China. LARS consists of large A-frames, winches, and ancillary equipment. In March 2016, UK Seabed Resources and the International Seabed Authority signed a 15-year contract for the exploration of polymetallic nodules in the eastern part of the Clarion-Clipperton Fracture Zone. The area allocated to the contractor covers a total surface of 74,919 square kilometers in the eastern part of the Clarion-Clipperton Fracture Zone (CCZ). In March 2016, Soil Machine Dynamics and Underwater Mining Solutions (UMS) teamed up to offer customers a full scope of mining equipment required for underwater mining projects, offshore and inland, in all territories. In February 2016, Soil Machine Dynamics Ltd, a subsea engineering company, crossed a significant milestone;  the MV Happy Delta, loaded with the world’s first deep sea mining vehicles, left the Port of Tyne in the U.K. In late 2007, Soil Machine Dynamics Ltd was awarded a contract to design and build the world’s first deep sea mining vehicles for Canada-based Nautilus Minerals.

Asia Pacific dominated the global marine mining market in 2017. It is the most populated region in the world. It is a home to around 50% of the world’s total population. Construction and electronic sectors are expanding at a rapid pace in the region. Hence, demand for metals and minerals is increasing rapidly. In order to meet the rising demand, most countries in Asia Pacific are shifting toward marine mining. In 2014, the International Seabed Authority and Japan Oil, Gas And Metals National Corporation (JOGMEC) of Japan signed a 15-year contract for the exploration of cobalt-rich ferromanganese crusts. As per the contract, JOGMEC is likely have exclusive rights for exploration of cobalt-rich ferromanganese crusts over 3,000 square kilometers of the seabed in the Western Pacific.

Resources such as fish and oil have been taken from the sea since many decades. Of late, the marine environment has been targeted as a source of renewable energy. The realization that metalliferous deposits on the seafloor could prove to be a valuable source of scare metals has become increasingly widespread in the last few years. Over the past decade, the demand for precious metals for advancing technologies has surged, making deep sea deposits increasingly attractive to commercial operators. The most likely targets for deep-sea mining are polymetallic sulfides, manganese nodules, and cobalt-rich ferromanganese crusts.

Papua New Guinea, Japan, and China are major countries for marine mining activities. In 2014, the International Seabed Authority and Japan Oil, Gas And Metals National Corporation (JOGMEC) signed a 15-year contract for the exploration of cobalt-rich ferromanganese crusts. Under the contract, JOGMEC is likely to have exclusive rights for exploration of cobalt-rich ferromanganese crusts over 3,000 square kilometers of the seabed in the Western Pacific. In 2017, Japan successfully tapped into a deposit of mineral resources from a deep water seabed off the coast of Okinawa. On the other hand, the marine mining market in China is anticipated to expand at a significant pace during the forecast period.

The report includes detailed value chain analysis, which provides a comprehensive view of the global marine mining market. Porter’s Five Forces model has also been included to help understand the competition landscape of the market. The study encompasses market attractiveness analysis, wherein technology and application segments have been benchmarked based on their market size, growth rate, and general attractiveness.

The study provides a decisive view of the global marine mining market by segmenting it in terms of technology, application, and region. In terms of technology, the market has been classified into remotely operated vehicles (ROVs), SONAR, and marine seismic methods. Based on application, the marine mining market has been divided into automotive, precious metals, construction, electronics, and others (including industrial machinery and consumer goods). These segments have been analyzed based on the present and future trends. Regional segmentation covers the current and forecast demand for marine mining in North America, Europe, Asia Pacific, and Rest of World.

The report provides size (in terms of value) of the marine mining market for the base year 2017 and the forecast between 2018 and 2026. Market numbers have been estimated based on technology, and application segments of the global marine mining market. Market value have been provided for the global, regional, and country-level markets.

The global marine mining market has been segmented as follows: