The growing number of health-conscious consumers has encouraged companies in the malted barley flour market to develop products with clean label malted ingredients. For instance, Muntons - a supplier of malted ingredients for the worldwide F&B industry, manufactures high-quality clean-label malt ingredients targeted at health-conscious consumers. This trend has bolstered the output of malted barley flour market which is expected to reach ~7,382,500 metric tons by the end of 2029.

The brewing industry is one of the key focus points for companies in the malted barley flour market, owing to the rapidly growing craft brewing movement worldwide. Companies are investing for the development of new production facilities that can specially focus on brewing applications. They are making bold investments to incorporate test breweries, test kitchens, and conference facilities to help stakeholders have an interactive approach toward innovations in craft brewing. These investments have helped market players to closely identify the needs of their customers. 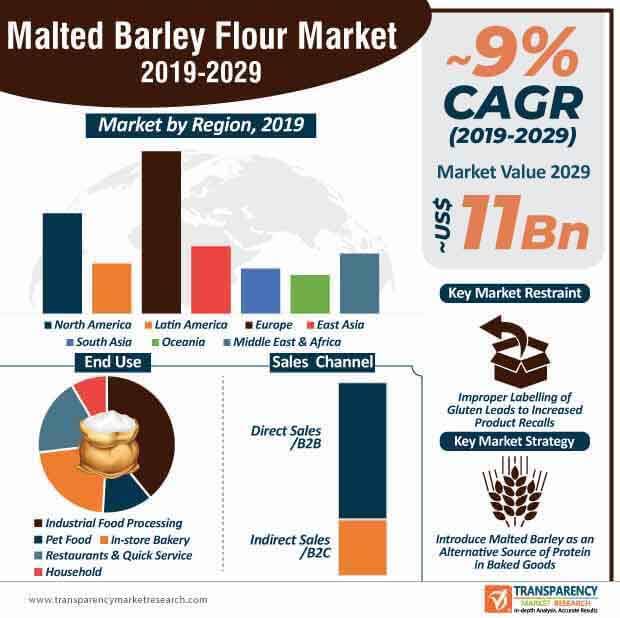 The trend of home beer making has driven investments in state-of-the-art product development and innovation facilities. Companies in Europe are strengthening their supply chains by developing malted barley flour products, kibbles, flakes, and flour blends to meet consumer requirements. They are inviting potential customers to book the facilities in order to conduct brainstorming sessions with in-house bakers, head brewers, and food technologists to gain insights on changing consumer preferences. On the other hand, companies are introducing malted barley in baked goods as an alternative source of protein.

Malted Barley Flour versus Spent Grains: Which is better?

Spent grains are gaining popularity due to their low-sugar/starch content and are high on fiber and protein. However, malted barley flour has small amount of fiber as compared to spent grains. Hence, companies in the malted barley flour market are increasing awareness about the enzymatic activity of the flour in the production of baked goods that provides desired results to end users. Thus, manufacturers are creating revenue streams by increasing the production of sweeter bread products, doughnuts, cakes, and the likes. This trend has led to exponential growth of the malted barley flour market, which is anticipated to progress at a healthy CAGR of ~9% during the forecast period.

Companies are creating stable business streams by tapping opportunities in bakery products segment. As such, bakery & confectionary sub-segment is projected to lead the in industrial food processing segment. On the other hand, spent grains are gaining popularity for their high-fiber attributes, contributing toward reduced ecological footprint.

Apart from bakery & confectionary, producers are leveraging incremental opportunities in diverse segments such as pet food and breakfast cereals. Lately, pet owners are growing increasingly aware about gastrointestinal and joint problems of animals. In order to avoid such health issues in pets, pet parents are opting for products with malted barley flour to maintain optimum health of their animals. 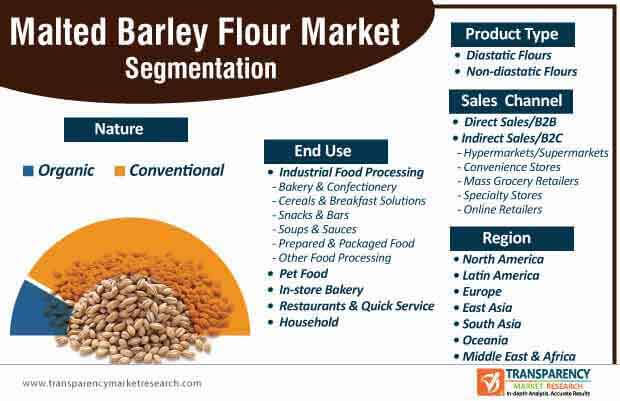 Stuck in a neck-to-neck competition with other brands? Request a custom report on Malted Barley Flour Market

Continuous growth of the malted barley flour market largely contributes to the number of fragmented market players, which account for ~55-60% of the market stake. This has enabled innovations in craft brewery. Moreover, high prevalence of millennial population has contributed to the business of craft brewery with the growth of HoReCa, especially in developing economies of East and South Asia.

Bakery & confectionary is one of the key focus segments of producers. However, improper labelling of gluten in malted barley flour products has led to issues of product recalls. Hence, companies should adopt ‘full-ingredient’ labeling to prevent product recalls. Companies should explore untapped opportunities in Latin America and Middle East & Africa, since the malted barley flour market is predicted for exponential growth during the forecast period.

Key indicators of market growth, which include year-on-year (Y-o-Y) growth of the market, value chain, supply chain analysis, and compounded annual growth rate (CAGR) are elaborated in the study in a comprehensive manner. This information is intended to help readers understand the quantitative growth prospects of the malted barley flour market during the forecast period.

The study is intended to offer a holistic market overview to stakeholders in the malted barley flour manufacturers, suppliers, distributors, and investors, and to help them develop winning growth strategies. Stakeholders in the malted barley flour market, which include investors, industry experts, researchers, and journalists, and business researchers, can leverage the information and data presented in TMR’s study.

The study also includes statistics and facts related to the macro as well as microeconomic factors that are impacting expansion of the market. It also offers actionable insights into the future trends in the malted barley flour market. Furthermore, small businesses and new entrants in the malted barley flour market can make use of the information presented in this study, based on which, they can make appropriate business decisions in order to gain momentum in the market.

Information acquired from primary resources and secondary resources is compiled in a comprehensive manner. This also acts as a validation from companies in the malted barley flour market, which makes TMR’s projections more accurate and reliable.

TMR’s studies the malted barley flour market in terms of a few important segments. These are nature, product type, sales channel, end use, and region. This report offers comprehensive data and information about the important market dynamics and growth parameters associated with these categories.