Changing consumer demands are being witnessed in the malic acid market amid the coronavirus crisis. Though an increasing number of people is striving to be physically active, poor market sentiments are equally affecting the sales of dietary supplements. Hence, manufacturers are bullish on future revenue opportunities when an increasing number of more people growing health conscious, thus fueling the demand for dietary supplements involving malic acid.

Malic acid-induced dietary supplements are being combined with creatine supplements in order to improve the body’s absorption of creatine. Such trends are translating into value grab opportunities for companies in the malic acid market. Since several people are becoming health conscious by maintaining optimum immunity as a result of COVID-19, individuals are increasing efforts to prevent kidney stone and skin issues with the help of malic acid-induced dietary supplements. 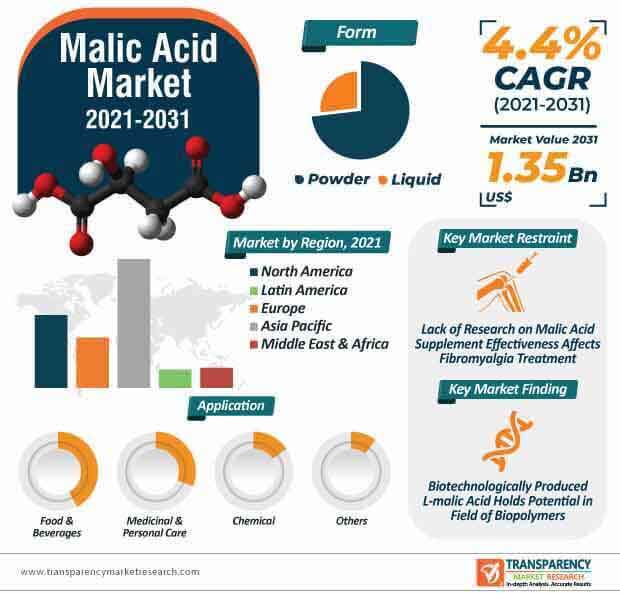 Lack of Research in Supplements, Skincare Products Preventing Regular Use

The malic acid market is projected to surpass US$ 1.35 Bn by 2031. However, possible side effects of malic acid such as diarrhea, nausea, headache, and the likes are affecting the sales of malic acid supplements. The pharmaceutical companies need to increase their R&D efforts to introduce better dietary supplements with the safety of long-term or regular use.

On the other hand, malic acid-induced skincare products are being linked with redness, irritation, and itching. Hence, companies are recommending the use of sunscreen in combination with skincare products containing alpha-hydroxy acid and malic acid to prevent unwanted skins reactions.

The malic acid market is predicted to clock a CAGR of 3.6%, in terms of volume, during the forecast period. However, the high prevalence of health issues such as dry mouth, fibromyalgia, skin issues, and kidney stone are fueling the demand for malic acid supplements.

Moreover, additive innovations are contributing to the growth of the malic acid market. NutriScience - a global ingredient developer and supplier, is gaining recognition for NuMalic® organic-complaint L-malic acid that is gaining application in functional foods, powdered drink mixes, and tea beverages, among others. As such, food & beverages (F&B) are expected to dictate the highest revenue share amongst all application types in the malic acid market during the forecast period.

Malic acid derived from fossil resources is currently being used in the F&B industry. However, transition from a fossil-based to a bio-based economy is revolutionizing the global malic acid market. Such trends are anticipated to boost the production capacities of manufacturers, since fossil resources are depleting at a fast rate. Biotechnologically produced L-malic acid holds promising potentials in the field of biopolymers.

Besides ecological reasons, the possibility to produce enantiopure L-malic acid by microbial fermentation is emerging as an advantage over chemical synthesis of malic acid. The utilization of renewable substrates as a substitute to glucose is being emphasized as a key aspect for a competitive bio-based production of malic acid. 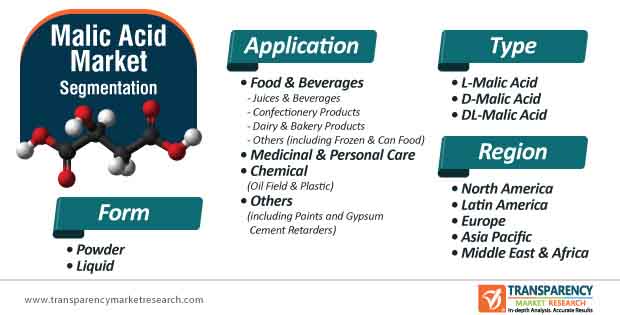 Looking for Regional Analysis or Competitive Landscape in Malic Acid Market for Performance OEM , ask for a customized report

Amid poor market sentiments caused by the coronavirus crisis, the growing need to improve physical performance and the overall well-being of individuals is triggering the demand for malic acid supplements. The market is projected to reach 79,645.3 tons by 2031. However, there is a lack of more recent research on malic acid’s effectiveness as a fibromyalgia treatment. Hence, companies in the malic acid market are boosting their efforts in research, and increasing awareness about malic acid in combination with magnesium, which is known to alleviate pain and tenderness in people with fibromyalgia.

Rise in Use of Malic Acid in Food & Beverages Industry

This study covers a detailed segmentation of the global malic acid market, along with key information and a competition outlook. The report mentions company profiles of players that are currently dominating the global malic acid market, wherein various development, expansion, and winning strategies practiced and implemented by leading players have been presented in detail.

The report provides detailed information about the global malic acid market on the basis of comprehensive research on various factors that are playing a key role in accelerating the growth potential of the global market. Information mentioned in the report answers path-breaking questions for companies that are currently operating in the market and are looking for innovative methods to create a unique benchmark in the global malic acid market, so as to help them design successful strategies and make target-driven decisions.

The research methodology adopted by analysts for compiling the global malic acid market report is based on detailed primary as well as secondary research. With the help of in-depth insights of the market-affiliated information that is obtained and legitimated by market-admissible resources, analysts have offered riveting observations and authentic forecasts for the global malic acid market.

During the primary research phase, analysts interviewed market stakeholders, investors, brand managers, vice presidents, and sales and marketing managers. Based on data obtained through interviews of genuine sources, analysts have emphasized the changing scenario of the global malic acid market.