On account of the rising demand for fast, scalable, low power consuming, and non-volatile memory devices, especially in the automotive, enterprise storage, and aerospace and defense sectors, the global market for magneto resistive RAM (MRAM) is likely to gain significant impetus over the forthcoming years. 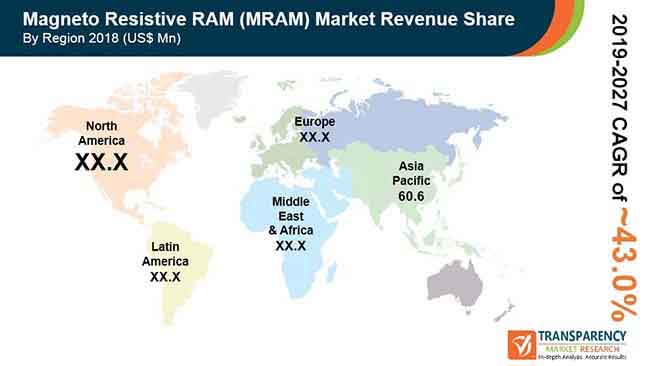 Request a sample to get extensive insights into the Magneto Resistive RAM (MRAM) Market?

Nowadays, several consumer electronics applications utilize technologically advanced memory devices in a bid to gain reliability, ensure data integrity, and enable low energy consumption, which in turn, is anticipated to create lucrative opportunities for the global market for MRAM in the coming years.

On the geographical front, Asia Pacific has surfaced as the leading contributor to the global MRAM market. The ongoing development of the data center infrastructure in this region, thanks to the rising penetration of internet and the robust usage of cloud computing, is acting at the key driving factor behind the growth of the Asia Pacific MRAM market. Researchers expect this regional market to remain dominant over the forecast period.

Stuck in a neck-to-neck competition with other brands? Request a custom report on Magneto Resistive RAM (MRAM) Market

North America emerged second in the global market for MARM in 2018. Supported by a strong concentration of key vendors and the rise in research and development activities, the North America market for MRAM is likely to retain its position during the period of forecast. Apart from this, the growing need to curtail data consumption, together with the increasing number of computationally intensive applications, is projected to boost the demand for fast and highly scalable memory solutions in North America, which is anticipated to create attractive growth opportunities for MRAM manufacturers over the next few years. On the other hand, Europe is likely to experience a moderate demand for MRAM devices in the near future.

are some of the leading vendors of MRAM across the world. The leading players in this market are investing heavily for the development of technologically advanced MRAM and are expected to focus on product innovation in the coming years.

The magneto resistive RAM market is expected to gain tremendous growth across the assessment period of 2019-2027. The growing influence of the latest advancements in the electronics sector is anticipated to bring good growth opportunities for the magneto resistive RAM market during the forecast period. The magnifying influence of devices like wearables and flexible electronic products will serve as a vital growth opportunity.

MRAM, by combining the inherent advantages of both DRAM in terms of density and SRAM in term of read and write speed has the potential of becoming a universal memory in the coming years. The global MRAM market is predicted to have tremendous growth opportunity in the coming years as a nonvolatile solid state memory in order to replace other electrically erasable programmable read-only memory (EEPROM) and flash memory where high write endurance is required.

Moreover, the major challenge of fabricating high performing memory chips on soft flexible substrates without reducing the performance is also eliminated by technologically advanced MRAM technology. MRAM outperforms the traditional NAND memory used in wearable and flexible electronics in terms of data retention capacity after power cut off, low power consumption along with increased processing speed. In addition, MRAM has the capability of operating in extreme temperature condition and can resist very high radiation. Thus, MRAM is also predicted to witness huge demand from various aerospace and military applications in the coming years.

For the purpose of providing detailed study of the market, the global MRAM market has been segmented on the basis of product type, application and geography. MRAM is available in two different product types including toggle MRAM and second generation MRAM (STT-MRAM). In order to track the market accurately, the third generation MRAM that is predicted to get commercialized by the beginning of 2022, has also been considered within the scope of research. MRAM also finds its application across different product segments such as consumer electronics, robotics, automotive, enterprise storage, aerospace and defense and others. The others segment includes application of MRAM in sensing devices, medical devices and smart meters.

Geographically, the market has been segmented into Asia Pacific, North America, Europe, Latin America and Middle-East and Africa (MEA). In terms of revenue and growth, the Asia Pacific region is anticipated to drive the market of MRAM in the coming years due to rapid growth in computationally intensive applications and rising demand for highly scalable memory solutions. Global MRAM market report provides an in-depth study of the current market trend and future forecast during the period from 2019 to 2027 in terms of revenue (USD Million).

This report also provides an exhaustive study of the global MRAM market including the key strategies adopted by leading players, market attractiveness analysis by product type, value chain analysis, industry evolution and comparative advantage of MRAM over other memory solutions.

Moreover, the penetration rate of MRAM across various industry verticals during the period from 2017 to 2021 is also highlighted in this report. In addition, detailed analysis of the drivers, restraints and opportunities that are predicted to affect the market in the coming years is provided in this report. Some of the major players operating in the global MRAM market includes Everspin Technologies Inc. (U.S), Avalanche Technologies (U.S) and Spin Transfer Technologies (U.S) among others.