Solvent is a liquid that dissolves a solute. Water is the common solvent used in various industries. Solvents are primarily used in paints and coatings, polymers, printing inks, pharmaceuticals, and cosmetics. In printing inks, solvents are used to dissolve pigments and aid the drying of inks. Furthermore, low-boiling-point solvents evaporate quickly, leaving the pigment on the surface of the substrate. Ink solvents are inks primarily used as solvent base inks in various printing applications. Generally, two types of solvent are used in the printing inks industry: oxygenated and hydrocarbon solvents. Oxygenated solvents contain oxygen in their molecule structure. They are derived from petroleum based materials and are widely used as additives in the manufacture of various products (from cosmetics and paints to cleaning detergents). Hydrocarbon solvents are made of hydrogen and carbon atoms. These include aliphatic and aromatic solvents such as toluene, gasoline, hexane, and xylene. Solvent inks are durable and versatile. Increase in consumption of solvents in the printing inks industry is anticipated to drive the global ink solvents market during the forecast period. 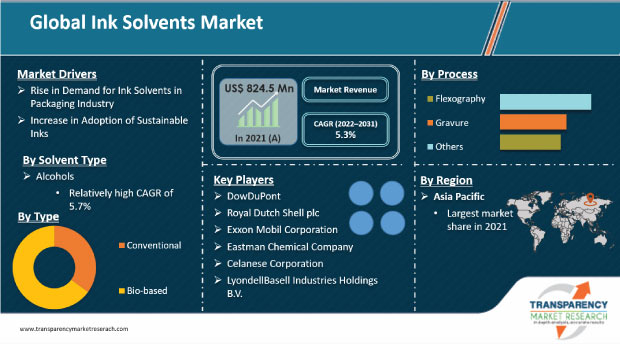 Low volatile organic compound (VOC) emission of inks and rise in demand for these inks in various industries are key factors driving the bio-based ink solvents segment. The packaging industry is continuously evolving; therefore, printing has gained a strong foothold in the industry. Furthermore, the advent of solvent-based inks in textiles and advertising applications has boosted the demand for ink solvents. Exceptional printing quality, image durability, and versatility in printing on any substrate are propelling the printing inks industry, thereby augmenting the ink solvents market. Additionally, development in technologies and introduction of bio-based solvents have resulted in the replacement of conventional solvents. Increase in demand for bio-based inks is expected to fuel the ink solvents market during the forecast period.

The global ink solvents market has been segmented based on solvent type, type, process, and region. In terms of solvent type, the market has been divided into alcohols, ketones, hydrocarbons, and others (including ethers and esters). The alcohols segment dominated the market with 40% share in 2017. The hydrocarbons segment is expanding at a significant pace owing to its superior features. Based on type, the global ink solvents market has been bifurcated into conventional and bio-based. The bio-based segment held nearly 30% share of the market in 2017. Demand for petroleum-based solvents has been decreasing due to the increase in number of regulations over VOC emissions from paints and coatings, printing inks, and industrial and domestic cleaning products; and rise in environmental awareness. Less harmful and environment-friendly solvents are replacing petroleum-based solvents. These factors are anticipated to propel the bio-based segment during the forecast period.

In terms of region, the global ink solvents has been split into North America, Latin America, Europe, Asia Pacific, and Middle East & Africa. Demand for ink solvents was high in Asia Pacific in 2017. Economic growth, increase in digitalization, and rise in urbanization in China, Vietnam, and India are fueling the ink solvents market in the region. The market in North America has matured due to significant consumption of conventional ink solvents in advertising and promotion applications in the region. Utilization of bio-based inks in Germany, the U.K., Italy, France, and Russia is increasing due to the expansion in the packaging sector. This is augmenting the ink solvents market in Europe. Middle East & Africa is expected to be a major region of the global ink solvents market during the forecast period due to the growth of the packaging sector and increase in digitization in the region. This is projected to create significant opportunities for manufacturers of ink solvents in the near future, primarily in the advertising & promotion sector in emerging countries.

The report comprises detailed value chain analysis, which provides a comprehensive view of the global ink solvents market. The Porter’s Five Forces model has also been included to help understand the competition landscape of the market. The study encompasses market attractiveness analysis, wherein solvent type, process, and type segments have been benchmarked based on their market size, growth rate, and general attractiveness.

The report provides size (in terms of volume and value) of the ink solvents market for the base year 2017 and forecast for the period between 2018 and 2026. Market numbers have been estimated based on solvent type, process, and type segments of the market. Market size and forecast for each solvent type, process, and type segment have been provided for the global and regional markets.