Industrial gloves are considered important tools for protection of a person from infection, burn, and injury. In the biotechnology industry, gloves are worn so as to avoid cross contamination. Hand protection gloves are primarily utilized in food and beverage, healthcare, chemical, electrical, and automobile industries to ensure well-being of the employees. Some industries make use of reusable hand protection gloves, while other sectors like healthcare, food and beverage industries opt for disposable hand gloves to keep away cross contamination. The growing importance of these gloves is estimated to work in favor of the growth of the global industrial gloves market in the forthcoming years.

All these benefits associated with the use of these gloves are likely to foster growth of the global industrial gloves market over the tenure of assessment.

North America is one of the prominent regions in the global industrial gloves market due to the presence of numerous service and manufacturing industries in the region. In addition, strict government rules regarding safety of industrial workers is likely to boost the sales of industrial gloves. Furthermore, rising demand for improved performance and comfort is also estimated to play an important role in driving the demand for the product.

Industrial gloves are extensively used in pharmaceuticals, chemicals, food and beverage, and chemicals industry apart from other industries such as oil and gas, construction, automotive, and transportation. Workers in these industries require protective gloves to protect their hands from hazardous chemicals, cuts and abrasions, and contamination of different kinds. For example, workers in the chemical industry are more susceptible to acid spillage which could severely damage their hands due to which they require protective gloves. In the pharmaceutical sector, it is mandatory for workers to wear gloves in order to avoid contamination or cross contamination. In the food industry, it is imperative that workers wear gloves while dealing with food in order to maintain a hygienic environment. 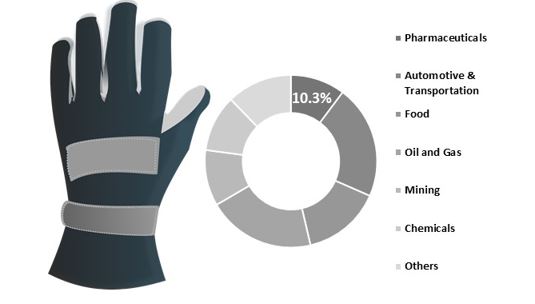 Additionally, increase in geriatric population and rise in many viral and other diseases worldwide is anticipated to fuel the growth of pharmaceutical and chemical industries. Aging is associated with a large number of diseases and disorders, and elderly individuals often take more time to recover from these ailments. The geriatric population is more prone to common health conditions such as diabetes, cancer, heart problems, nerve issues and organ system failure. Furthermore, extensive growth in world population is becoming a concern to feed the 7.6 billion people. Countries around the globe are paying attention to the food industry due to this scenario. Considering all these factors, impact of this driver is expected to remain high.

Stuck in a neck-to-neck competition with other brands? Request a custom report on Industrial Gloves Market

By region, Asia Pacific has emerged as the most lucrative market Asia Pacific captures approximately 65% of the total global natural rubber gloves producing units. Additionally, Europe and North America regions are already having a significant growth in gloves industry. China and Thailand are expected to hold considerable share in the market. Industrialization witnessed in these nations will drive the industrial gloves market.

Key indicators of market growth, which include value chain as well as supply chain analyses, and Compound Annual Growth Rate (CAGR), are elucidated in TMR’s study in a comprehensive manner. This data can help readers interpret quantitative growth aspects of the global industrial gloves market during the forecast period.

A unique research methodology has been utilized by TMR to conduct a comprehensive research on the growth of the global industrial gloves market and arrive at conclusions on the future growth prospects of the market. This research methodology is a combination of primary and secondary research, which helps analysts warrant the accuracy and reliability of the drawn conclusions.

These primary and secondary sources provided exclusive information during interviews, which serves as a validation from industrial gloves industry leaders. Access to an extensive internal repository and external proprietary database allows this report to address specific details and questions about the global industrial gloves market with accuracy. The study also uses the top-down approach to assess the numbers for each segment and the bottom-up approach to counter-validate them. This has helped in making TMR’s estimates on the future prospects of the global industrial gloves market more reliable and accurate.

The global industrial gloves market has been segmented as below:

Segmentation of the Industrial Gloves Market

Changing industry trends and other crucial market dynamics associated with these sections of the industrial gloves market are discussed in detail.