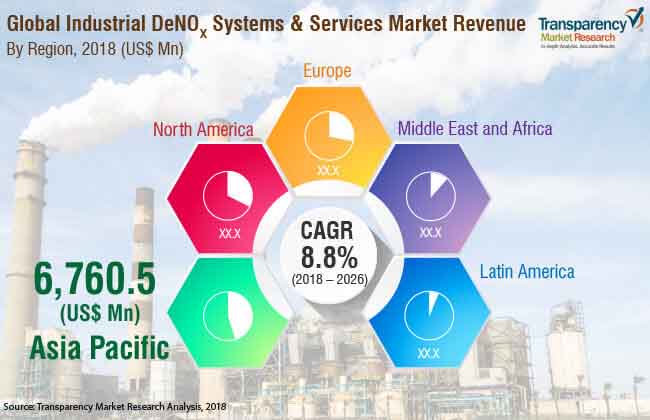 Industrial DeNOx systems and services play a vital role in curbing air pollution by reducing the amount of NOx gases released into the environment. Industrial DeNOx systems and services help improve the overall site safety and help limit the air pollution caused by flue gas emissions. Environment protection associations all over the globe have stringent rules and regulations against NOx emissions across different industries. Some of these associations include the U.S. Environmental Protection Agency and National Ambient Air Quality Standard (NAAQS).

One of the major restraints of the industrial DeNOx systems & services market is lack of awareness about NOx reduction technologies in developing countries such as South Africa, India, and Mexico. This creates a significant amount of NOx emissions in these countries, resulting in air pollution. For example, several cities in India violate NOx emission standards set by regulatory bodies, due to lack of awareness about industrial DeNOx techniques.

Demand for selective catalytic reduction to increase in the near future

Selective catalytic reduction (SCR) is a technology utilized for control of post-combustion nitrogen oxide (NOx) emissions from industrial plants. This technology uses a reducing agent such as ammonia to reduce NOx selectively in the presence of oxygen and a catalyst. Ammonia is injected into the exhaust gas stream and is mixed with NOx. This mixture of ammonia and NOx is passed through a catalyst bed, wherein a large amount of NOx reacts with the catalyst. Adsorbed ammonia decomposes into diatomic nitrogen and water molecules, thereby reducing the NOx level in the exhaust gas. In terms of value, the selective catalytic reduction segment accounted for a significant share of the global industrial DeNOx systems & services market in 2017, due to the superior cost-to-performance ratio offered by selective catalytic reduction DeNOx systems.

In terms of volume, Asia Pacific and North America are leading regions of the global industrial DeNOx systems & services market. In terms of value, the market in Asia Pacific is projected to expand at a substantial pace during the forecast period, followed by Middle East & Africa and Latin America. The market in Latin America is estimated to expand considerably during the forecast period, owing to rise in the industrialization and increase in the demand for these systems in power plant applications in the region. The market in India, ASEAN, Japan, and China is anticipated to expand at a significant pace in the next few years, due to increase in the demand for DeNOx systems in these countries for use in various applications such as power plants, gas turbines, waste incineration plants, cement plants, nitric acid plants, and FCC units in refineries.

The report comprises detailed value chain analysis, which provides a comprehensive view of the global industrial DeNOx systems & services market. Porter’s Five Forces model has also been included to help understand the competitive landscape of the market. The study encompasses market attractiveness analysis, wherein service type, type and application segments have been benchmarked based on their market size, growth rate, and general attractiveness.

The report provides the size of the industrial DeNOx systems & services market for 2017 and forecast for the next nine years. The market size has been provided in terms of revenue. Market numbers have been estimated based on service type, type, and application of industrial DeNOx systems and services. Market size and forecast for each service type, type, and application segment have been provided for the global and regional markets.

The global Industrial DeNOx Systems & Services Market has been segmented as follows: