The global industrial controls system market is segmented by region in North America, Europe, Asia-Pacific (APAC) and Rest of the World (RoW). North America led the global Industrial Controls System Market in 2014 and is also expected to maintain its dominance in 2021 as well in this market. The growth in North America is primarily attributed due to an increase in demand for safer and reliable process automation in different sectors, such as power plants, oil & gas and water & wastewater among others. Asia Pacific held the second largest share of the global industrial controls system market in 2014 followed by Europe and RoW respectively. The growth of the industrial controls system market in Europe can be attributed to the increase in demand for modernization of oil & gas, water & wastewater, and power infrastructures among others. Power and oil & gas industries were major contributors in RoW, in 2014.

The industrial controls system market is segmented on the basis of types into supervisory control and data acquisition (SCADA), distributed control system (DCS) and programmable logic controller (PLC). Distributed control system (DCS) is holding the maximum market revenue share in 2014 and is expected to remain so during the forecast period from 2015 to 2021. The increasing industrial infrastructure investment and expansion of power and oil & gas project activities globally is spurring the demand for this segment. In addition, increasing need of software in industrial automation, rise in infrastructure investments in emerging markets and growth in demand for process automation among different industry verticals are the major factors that are driving the industrial controls system market globally. By components, the global SCADA market has been segmented into a programmable logic controller (PLC), human machine interface (HMI), remote terminal unit (RTU), SCADA communication system, and others. 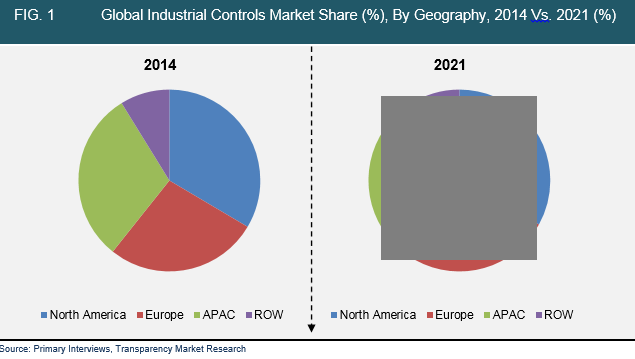 In various industrial systems and network stations, there is a need to interconnect several devices and equipment, so that performance and efficiency of industrial-based processes is maintained. This is possible with the help of using specific control systems, thus constituting the industrial controls system market. The report published by Transparency Market Research extensively covers various details of this market, along with factors such as top drivers and trends, leading market segments, competitive outlook, regional market growth, and several others aspects. The need for better quality of industrial processes, improved efficiency, and requirement of automation, are some of the reasons that are fueling the market from broad perspective.

The global industrial controls market is mainly divided into several segments based on four criteria: types, applications, geography, and components. Based on the product types, the market is divided into programmable logic controller (PLC), supervisory and data acquisition (SCADA), and distributed control system (DCS). Based on the components criteria, the global industrial controls market is divided into many segments such as: Remote Terminal Unit (RTU), SCADA Communication Systems, Programmable Logic Controller (PLC), Human Machine Interface (HMI) and others. On the basis of applications, electrical power, water and waste management, automotive industry, pharmaceutical, and oil and gas are some of the sectors that are a significant part of the industry. Based on the regional perspective, the global industrial control systems market is spread across North America, Asia Pacific, Europe, and Rest of the World.

The report presents a detailed overview of the global industrial controls market covering vital factors such as drivers, opportunities, restraints, prime segments, competitive scenario, revenue fluctuations, and many more. The study carried out for this market was possible due to extensive research and analysis of all associated market aspects. Revenue estimates have been presented in US$. A detailed analysis of the market’s growth has been provided in the report for the forecast period from 2015 to 2021. All the data collected for the global industrial controls market is obtained by conducting primary as well as secondary research.

In industrial automation processes, there has been a continuous need for the use of software programs for better process efficiency and accuracy, which further contributes towards being beneficial to the global industrial control systems market’s growth.  Apart from this, the market also is being pushed by the need for extensive process automation, as well as the increasing usage of SCADA, PLC and DCS systems in industrial environments. The improving industrial scenario in emerging economies such as India, China and Indonesia also is a large contributor towards a better growth curve of the global industrial control systems market. These economies are mainly investing in high amounts in the market, through several well-established market players, thus proving beneficial towards the market’s rise.

The global industrial control systems market is mainly segmented by region into Europe, Asia Pacific, North America, and Rest of the World. Of these regions, North America held the top spot with regards to a geographical spread of the market and its associated sales in this region. This region is further expected to continue its dominance in this market. After North America, Asia Pacific region held the second regional segment spot with respect to the market shares, mainly due to the rising industrial and automation processes in the area.

The report outlines in detail, the extensive competitive landscape present in the global industrial control systems market. This competitive scenario is based on several factors such as market scope, growth rate, market attractiveness analysis, and others. Some of the most prominent and key market players in this industry are: Honeywell International, Emerson Electric Co., Omron Corp., Rockwell Automation, Siemens AG, Omron Corp., ABB Ltd., General Electric Co., Schneider Electric SE, and Alstom SA, amongst several others.

The industrial controls market is segmented as below: