As precision farming becomes the norm in 21st century, techniques for plant protection, of which use of herbicides is significant, are becoming imminent. This stems as farmers vie for high acreage at affordable investments to feed the world’s growing population. According to United Nations Food and Agriculture Organization (FAO), we will need 35% surplus food from today to meet the requirements of 8.5 billion people by 2030.

For long, experts and businesses across the world have mulled genetically modified crops (GM crops) as the solution to meet the ever-increasing food inflation. The need to curtail heribicide consumption was also forcing businesses to contemplate the introduction of GM crops. Contrary to proponents of GM crops, they only resulted in increased use of herbicides, at least for GMO corn and soybeans – the most popular crops in the U.S. This demonstrates sway of herbicides for some popular crop that the U.S. depends on. 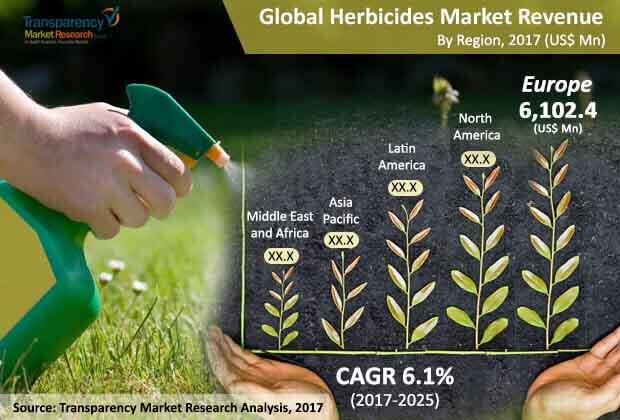 The growth in the agrochemical industry has helped development of new herbicides. TFor instance one of the top players Monsanto is concentrating on agrochemicals, including herbicides that complement genetically modified seeds. New constituent chemicals with improved properties, especially the ones that enable significantly reduced use, and often new mode of action have been discovered. Herbicide mixtures that involve application of multiple products in a single application is an example of this.

While synthetic auxin herbicides have been in use since 1950s, consistent R&D for weed control in the last decade has led to notable findings for these herbicides. The unfolding of Transport Inhibitor Response (TIR1)- a class of protein, has concluded the mystery of long-sought auxin receptor, for significance of auxin in regulating almost every aspect of plant development. This important finding of auxin signals continued use of synthetic auxins such as 2,4-D for weed control.

Increasing focus on R&D activities to innovate newer herbicide formulations is a trend that has come to the fore. This, mainly includes development of bio-based herbicides due to adverse implications of chemical-based products on environment and human health  Besides this, impetus on product manufacturers to develop herbicides, for the ones resistant to weeds validates continued demand of herbicides. Thus herbicides market receives boost, in turn.

Asia Pacific exhibits leading demand for herbicides. For example, in India, due to food inflation for the exploding population, and agriculture accounting for nearly 60% of the GDP, consumption of herbicides is poised to remain substantial. In doing so, voluminous use of chemical pesticides and herbicides has become the norm as conventional agricultural practices undergo swift change to maximize agricultural output.

On the contrary, the use of herbicides faces headwinds for changing food perspectives. Increasing demand for organic food, or food free of chemicals is slowing the use of herbicides in agricultural crop. Individuals are increasingly abstaining fromconsuming food grains or vegetables cultivated using chemical-based pesticides. . This has profound impact on the demand for herbicides.

Inadvertently though, Impact on Biodiversity hurdle for Growth

Besides this, herbicides have had serious implications on biodiversity. Overuse of herbicides to ensure plentiful yields has caused herbicide-resistant weeds and a massive decline in biodiversity. This is because prolonged use of herbicides impacts natural process of converting organic matter and disruption in balance of microorganism in the soil. For example, herbicides used to control grass can kill beneficial insects such as lady bugs and aphids. Hence, the aroused need to reduce use of herbicides for commercial agriculture.

With R&D and Investments, Opportunities galore for Bio-based Products

Extensive R&D by product manufacturers to develop new herbicides is likely spurt market share for these players. In this direction, development of bio-based herbicides is a key focus of participants in the global herbicides market. Large players such as BASF, Dow Chemical Company, and Monsanto have been making huge investments to expand their product line. These players are especially focused to develop bio-based herbicides to cater to changing demand for organic and chemical-free agricultural produce.

Besides this, development of products that edge out competitor’s products is a key growth strategy among top players in the herbicides market. In a recent move, Dow Chemical Company introduced a new herbicide for corn, and openly told farmers of superior results of their product. The release of the product was direct competition for Monsanto’s herbicides claimed to be ineffective for certain crop weeds.

Lack of knowledge of selective and non-selective herbicides among famers, mostly in developing countries provides space for growth for market players. Concentration of herbicides and persistence of herbicides in the soil are some areas where farmers need to be educated.

For some herbicides, there lies a thin line between controlling weeds for the complete growing season of the crop, before planting a sensitive crop in rotation. Persistence of herbicides is dependent on soil related factors, climatic conditions, and herbicidal properties.

Factors such as wide product portfolio for plant protection products of top players and robust R&D along with expanded manufacturing facilities at several locations are cementing position of large players in the herbicide market.

In order to stay competitive, and to maintain their position, these players are adopting an array of growth strategies in potential areas of expansion.

Foray into crop management education services is one of the services top players in the market are striving for growth. For example, Agrium Inc. employs more than 2000 agronomists who directly work with farmers for healthy crop yield.

Mergers and acquisitions, including acquisition of retail outlets is a key growth strategy among prominent players in the herbicides market. Acquisition of 76 retail outlets for agrochemical products by Agrium Inc. in 2016 is a case in point. The move not only helped to expand its revenue, but also presence in the crop protection market.

Apart from this, mergers between large players is a strategic move for growth in the herbicides market. For example, in 2016, Agrium Inc. announced its merger with PotashCorp - a manufacturer of low cost chemicals such as phosphate and potash for herbicides. Following the merge, Agrium Inc. enjoys large workforce and production capacity of the latter, resulting in increased market share.

In the future, as a roadmap for success, players in the herbicides market are vying for internationally acclaimed license to develop novel herbicide formulations. Some companies strive to obtain joint licensing for added benefits of cost and terms of use. In this context, Monsanto and Dow AgroSciences announced a global licensing agreement for use of Dow AgroSciences’ technology Exzact Precision Technology. This enables their access for a platform for innovative technology, for objectives of improved yield quality, productivity, and profitability.

Herbicides are the weed killers, employed to restrict the growth of weeds in the planted crop area. Herbicides interfere with the growth hormones, in the weeds, thereby blocking their growth, which eventually leads to the death of weeds. Some of the majorly consumed herbicides include glyphosate, atrazine, dicamba, 2,4-D etc. Europe dominated the herbicide market in terms of revenue, and is likely to do the same during the period of forecast. However, the preference of the users in Europe, has been shifting towards bio-based products, as a result of increasing awareness about health & environmental hazards of synthetic agrochemicals. Due to this, the region is anticipated to witness a decline in its market share during the forecast period. Usage of glyphosate was dominant in the market and is anticipated to remain dominant during the period of forecast.

Need to increase the agricultural productivity, is one of the major factors driving the growth of herbicide market. Glyphosate is the dominant segment majorly used in all the regions across the globe. The use of herbicides was widely witnessed in cereals & grains segment in most of the regions. Both, glyphosate and the cereals & grains segment are anticipated to continue their dominance during the forecast period with the highest CAGR.

The report includes detailed value chain analysis, which provides a comprehensive view of the global herbicides market. Porter’s Five Forces model for the herbicides market has also been included to help understand the competitive landscape in the market. The study encompasses market attractiveness analysis, where in products, and application are benchmarked based on their market size, growth rate, and general attractiveness.

The report provides the actual market size of herbicides for 2016 and estimated market size for 2017 with forecast for the next eight years. The global market of herbicides has been provided in terms volume and revenue. Market volume has been defined in Kilo tons and revenue in US$ Mn. Market numbers have been estimated based on product, and application of herbicides. Market volume and size have been provided in terms of global, regional and country level markets.

The study provides a decisive view of the global herbicides market by segmenting it in terms of product, and application. In terms of product, herbicides are classified as acetochlor, 2,4-d, glyphosate, atrazine, and others. In terms of application, it is segmented into oilseeds & pulses, cereals & grains, fruits & vegetables, others (nursery, turf, etc.). These segments have been analyzed based on present and future trends. Regional segmentation includes current and forecast demand for herbicides in North America, Europe, Asia Pacific, Latin America, and Middle East & Africa.

The global Herbicides market has been segmented as follows: