The growth of the global HER2 antibodies market is prophesized to be shaped by the rising demand for the antibodies worldwide. The market is gathering momentum from the augmented awareness about the rising prevalence of HER2 positive breast cancer. Various statistics reflect that the incidences of breast cancer has increased manifold over the last decade.

According to the World Health Organization (WHO), there are nearly around 200 different types of cancers in the world. Off all these, breast cancer has emerged as one of the most common types of cancer that has been plaguing women in recent times. Many pharmaceutical companies have engaged in extensive research and development activities in the light of such high prevalence of various types of cancers. Their purpose is to develop novel therapeutics to treat cancer.

Presence of Pipeline Drugs to Offer Hope to Cancer Patients

The demand within the global HER2 antibodies market has been spiraling in recent times. There is no one single cause for the occurrence of breast cancer. However, there are certain factors that are linked with the high prevalence of the disease and it includes the following

The demand in the global HER2 antibodies market is projected to increment at a robust CAGR of 8.6% during the forecast period of 2017 to 2025, primarily gaining from growing awareness regarding the prevalence of HER2 positive breast cancer. As per the figures provided by The American Cancer Society, 252,710 women were to be diagnosed with breast cancer in the U.S in 2017, with one in five females suffering from HER2 positive breast cancer. The global HER2 antibodies market is estimated to be worth US$ 21,669.1 mn by the end of the forecast period, i.e. 2025, considerably up from its evaluated worth of US$ 10,087.8 mn in 2016. 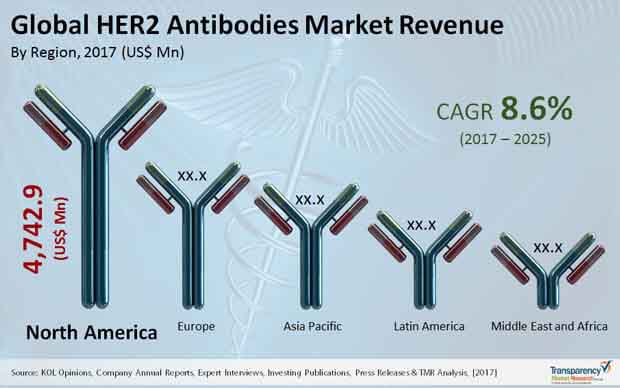 Based on the type of therapeutic drugs, the global HER2 antibodies market has been segmented into five major classes, viz. Trastuzumab, Ado-trastuzumab emtansine, Lapatinib, Everolimus, and Pertuzumab. Trastuzumab (Herceptin) is the first approved in the U.S. in 1998, and remains the gold standard for HER2-postive breast cancer. In 2016 too, Trastuzumab accounted for the most substantial chunk of the market at 62.1% shares terms of revenue. However, Tykerb is likely to emerge as a significant threat given its oral bioavailability. Growth in incidence of breast cancer and rise in cost burden for its treatment can drive the market during forecast period. Trastuzumab account for the prominent share in the HER2 antibodies market. However due to the high cost of products the market for the HER2 breast cancer is restraining the market during the forecasted period. However the market for HER2 antibodies is experiencing entry of large number of new drugs in the market. Few have already arrived and other more promising drugs are on their way to launch in this market

North America and Europe to Remain Most Lucrative Regions

Geographically, the HER2 antibodies market has been bifurcated into the regions of North America, Europe, Asia Pacific, Latin America, and Middle East & Africa. In 2016, North America accounted for the most prominent share of 42.7% of the global HER2 antibodies market, followed by Europe with less than a quarter of the global demand. This strong demand from the two regions is attributed to well-established health care infrastructure coupled with awareness of population regarding the treatment of HER2 breast cancer. The market in North America and Europe is expected to dwindle during the forecast period due to maximum top selling brands in these regions will be encountering by their exclusivity and patent expiry.

Revenue-wise, U.S. is the most profitable country-wide market for HER2 antibodies in North America while Rest of Europe and Germany market leading the Europe region. Asia Pacific may provide an attractive market for the HER2 antibodies because of increasing per capita income and increasing healthcare facilities and awareness regarding HER2 breast cancer. Besides Asia Pacific, Latin America region too is focusing on increasing the diagnostic rate of cancer and types of cancer, which will be driving the market during forecast period. Governments and non-profit organizations in the region are striving to spread awareness and control the increasing incidence rate of breast cancer. The incidence of cancer in Middle East & Africa is currently lower than that in countries such as the U.S. and the U.K. However, it is expected to rise rapidly compared to other regions in the next decade.

Among all the chronic diseases worldwide cancer is considered to be the most prevalent disease. Approximately 1,685,210 new cancer cases were diagnosed and about 595,690 cancer deaths in the US in year 2016. Whereas around 2,600 men and 246,660 that is about 29% women were diagnosed with breast cancer in year 2016. HER2 breast cancer is one of the aggressive type of breast cancer, caused due to over-expression of the HER2 protein. Breast cancers that overexpress the HER2 protein (known as HER2+) make up about 20% of the cases. HER2 positive breast cancer inclines to grow more rapidly than HER2 negative breast cancer. The factors such as being overweight, long term heavy smoking, use of menopausal hormone therapy, alcohol consumption, physical inactivity and many more are responsible for increasing risk of breast cancer. Increasing incidence of breast cancer is expected to lead to increase in demand for targeted therapies and boost the growth of the HER2 antibodies market during the forecast period.

This report analyzes the current and future prospects of the HER2 antibodies market based on type of treatment drugs and geography. The research is a combination of primary and secondary research, conducted for understanding and arriving at trends, used to forecast the expected revenue of the major HER2 antibody drugs in the near future. Primary research formed the bulk of our research efforts with information collected from in-depth interviews and discussions with a number of key industry experts and opinion leaders. Secondary research involved study of company websites, annual reports, press releases, investor presentations, analyst presentation and various international and national databases. The report provides estimated market size in terms of US$ Mn for each type of treatment drug, and geography for the period 2016 to 2025, considering the macro and micro environmental factors. The revenue generated from each drug was calculated by considering number of drugs used in the treatment and their market demand and sales as per their use, number of new drug launched, trends in industry, awareness, and adoption rate across all the geographies. The prevalence of HER2 breast cancer was also considered while estimating the market revenue.

The market report comprises an elaborated executive summary, which includes market snapshot that provides information about various segments of the market. It also provides information and data analysis of the market with respect to market segments based on type of treatment drugs and geography. The market overview section of the report analyzes market dynamics such as drivers, restraints and opportunities that influence the HER2 antibodies market in the current and future scenario. The report also provides pipeline analysis of the upcoming drugs for HER2 breast cancer.

Market share analysis among the market players is analyzed to signify percentage share of the major players operating in the market. All these factors will help the market players to decide about the business strategies and plans to strengthen their positions in the global market. Based on geography, the market has been analyzed for countries of North America, Europe, Asia Pacific, Latin America, and Middle East & Africa.

The global HER2 Antibodies market is segmented as follows: