The global sodium silicate market is gaining momentum due to a multitude of applications of sodium silicate across a host of end-use industries. Sodium silicates are used as adhesives, binders, detergents, additives in cleaning products, unique coatings, coagulant aids, catalyst bases, chemicals, deflocculates, zeolites, and cements to name a few across various industries. For instance, sodium silicate is used as a binder in the construction sector, whereas precipitated silica is used as reinforcement fillers in tire applications to serve the demand for green tires.

Apart from this, in several parts of the world, rising disposable incomes and changing consumer preference have been instrumental for the expansion of detergents and cleaning agents market. The rising awareness about the importance of staying healthy is leading to the increasing demand for cleaning products. Sodium silicate if used as an additive enables to maintain effective pH level during cleaning operations. This in turn, boosts the effectiveness of soaps and surfactants and detergency of cleaning products.

A report by Transparency Market Research (TMR) anticipates the global sodium silicate market to expand at a lackluster 1.92% CAGR for the forecast period between 2016 and 2025. Progressing at this rate, the market which stood at US$4.9 bn in 2016 will become worth US$5.81 bn by 2025 end. 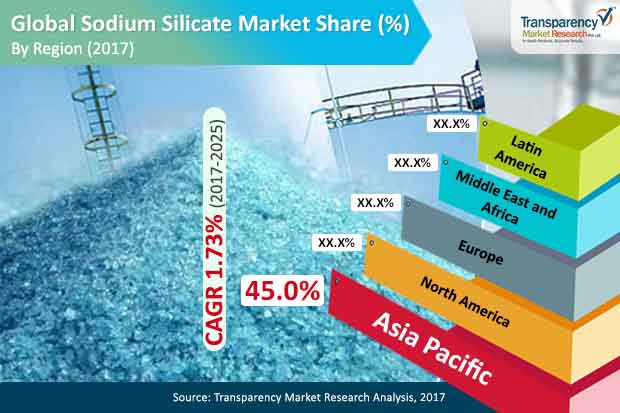 The report studies the global sodium silicate market on the basis of application and geography. In terms of application, the market has been segmented into silica manufacturing, detergents, chemicals and catalysts, pulp paper and board, water treatment, construction materials, soil stabilization, and others. Amongst all, in 2016, silica manufacturing held the leading share of the market. The segment held the leading 26.8% of the market in 2016; going forward the segment is anticipated to expand at a CAGR of 2.23% between 2016 and 2025.

This was followed by the detergents segment that held 15% of the overall market in 2016. The detergents segment is expected to display an increased market share over the course of the forecast period. This is mainly because of growth of health and wellbeing industry, rising disposable incomes, and changing consumer preferences. The segments of construction materials, soil stabilization are also expected to witness growth over the forecast period. The pulp paper and board and water treatment segments are anticipated to rise at a CAGR of 1.26% and 1.52% respectively over the forecast period between 2016 and 2025. The growth of pulp paper and board segment is attributed to growth of paper recycling industry for environmental reasons. On the other hand, efforts for water treatment to serve the rising demand for purified water with rapid urbanization is aiding growth of water treatment application segment.

Asia Pacific to Outshine with Leading Growth Rate through 2025

The key regions into which the global sodium silicate market is divided are: North America, Europe, Asia Pacific, Latin America, and the Middle East and Africa. Of them, Asia Pacific held the leading share of 54% in terms of production in the overall market in 2016. Going forward, the region is anticipated to display the leading CAGR of 2.3% between 2017 and 2025.

Europe stood as the second-leading region for sodium silicate with 21.8% share in 2016. North America stood a close third holding 17.97% market share in 2016.

Demand for sodium silicate is projected to increase significantly in the next few years considering the extensive manufacturing of silica and sodium silicate derivatives in various regions. Asia Pacific dominates the sodium silicate market in terms of production and demand. Countries such as China, Japan, and South Korea are expected to be the key producers and consumers of sodium silicate. Europe is the second largest consuming region.

The report includes detailed value chain analysis, which provides a comprehensive view of the global sodium silicate market. Porter’s Five Forces model for the sodium silicate market has also been included to help understand the competitive landscape in the market. The study encompasses market attractiveness analysis, wherein end-users are benchmarked based on their market size, growth rate, and general attractiveness.

The study provides a decisive view of the global sodium silicate market by segmenting it in terms of applications such as silica manufacturing, detergents, chemicals & catalysts, pulp,paper& board, water treatment, construction materials, soil stabilization and others. These segments have been analyzed based on present and future trends. Regional segmentation includes current and forecast demand for sodium silicate in North America, Europe, Asia Pacific, Latin America, and Middle East & Africa.

The global sodium silicate market has been segmented as follows: