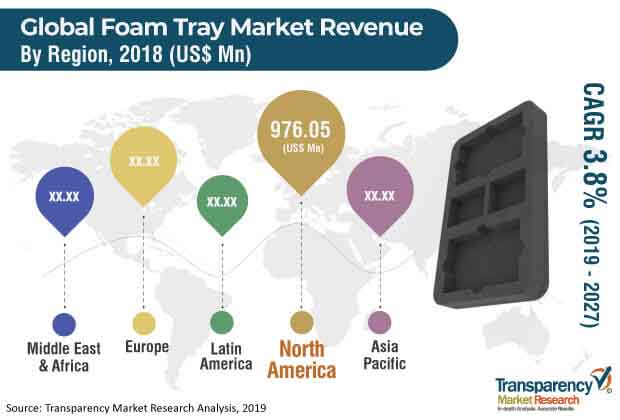 The global foam trays market is anticipated to expand at a significant pace during the forecast period, primarily due to the rise in demand for cost effective foam trays and rise in concerns regarding food safety. The process involved in the production of foam trays is not complex. It consists of fewer number of phases vis-à-vis production of plastics through the polymerization process. The labor cost involved in the production of foam is also low. This ultimately lowers the overall cost of foam trays. Concerns regarding the safety of food are increasing day-by-day. Foam trays protect food from environmental effects. The foam trays market was valued at around US$ 2.5 Bn in 2018 and is expected to expand at a CAGR of more than 3.8% during the forecast period. However, non-biodegradable nature of foam is restraining the foam trays market. Foam breaks down slowly and may sit at the landfills for more than 500 years. Furthermore, availability of bio-based products can hamper the foam trays market.

Key players operating in the foam trays market need to focus on manufacturing bio-based products and promoting these accordingly. Major players are engaged in establishing new facilities and entering into acquisitions and mergers to develop and launch new products. On January 17, 2019, Tekni-Plex’s subsidiary Tri-seal expanded its closure liner offerings with the addition of three cost effective, co-extruded foam products. Tri-seal is known for closure liners and seal products manufactured from polyethylene foam, which is used to package food, cosmetics, pharmaceuticals, health care, agriculture, and chemical products. On May 1, 2018, Tekni-Plex acquired Commodore Plastics and Commodore Technology under a newly-formed subsidiary: Dolco LLC. Commodore Plastics offers a wide range of traditional and custom polystyrene (PS) foam trays, which include padded food processors, industrial trays, and supermarket display trays. Commodore Plastics is expected to become a part of Delco Packaging, which is the largest producer of foam egg carton trays. It comprises innovative technologies of additive manufacturing of sustainable decoration solutions as well as novel technology for resalable packaging.

The report comprises detailed value chain analysis, which provides a comprehensive view of the global foam trays market. The Porter’s Five Forces Analysis model for the foam trays market has also been included to help understand the competition landscape of the market. The study encompasses market attractiveness analysis, wherein material and application segments have been benchmarked based on their market size, growth rate, and general attractiveness.

The report provides size (in terms of volume and value) of the foam trays market for the base year 2018 and the forecast for the period between 2019 and 2027. In-depth interviews and discussions were conducted with several key market participants and opinion leaders to compile this research report. Primary research represents a bulk of research efforts, supplemented by extensive secondary research. Annual reports, press releases, and relevant documents of key market players were reviewed for competition analysis and market understanding. Secondary research also includes search of recent growth trends, technical writing, Internet sources, and statistical data from government websites, trade associations, and agencies. These have proved to be reliable, effective, and successful approaches for obtaining precise market data, capturing market participants’ insights, and recognizing business opportunities.

The Foam Trays Market has been segmented as follows: