There is a good opportunity for growth of the global fluid coupling market in the power generation sector. Elecon Engineering Company Ltd estimates good opportunity for growth of fluid coupling in power equipment, power transmission, power distribution, and power generation. The expected potential of investment is estimated to be US$ 225 billion till 2022.

According to International Energy Agency (IEA), in 1990, global energy generation was 8,774 Mtoe (Million tons of oil equivalent) which has increased at a CAGR of 1.8% to reach 13,647 Mtoe in 2015. Asia Pacific had a market share of 29.3% in 1990 which has increased to 47.7% in 2015. In both China and India, respective governments are taking steps to increase energy production. Government of India (GoI) intends to increase renewable energy production by 175 GW by 2022 and increase wind energy production from the current 20 GW to 60 GW by 2022. Thus, with increasing growth of the global power sector, especially in Asia Pacific, the power industry is subsequently expected to drive the demand for fluid couplings. 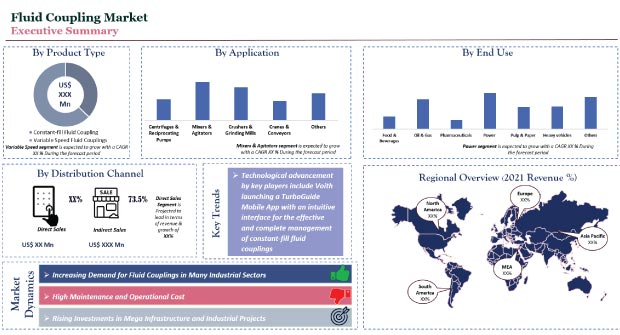 A growing trend in the global fluid coupling market is the rising demand for smaller-capacity fluid couplings. Rising construction of power plants for Independent Power Producers (IPP) is creating demand for smaller-capacity fluid couplings. In the U.S, utilities are allowed to purchase energy from NUGs (Non-utility Generators).This allows NUGs to receive a reasonable to excellent price for the energy they produce and ensures that energy generated by small producers will not be wasted.

Sensors in fluid couplings are usually only meant to send data about the product. However, manufacturers are interested in fluid couplings that can detect abnormalities and send signals to activate other devices. Manufacturing companies are also working closely with international OEM’s, mine owners, and equipment operators to manufacture systems that meet industry needs and standards.

Industrialization has increased phenomenally over the years across various regions. The growing influence of industrialization is a vital factor that will have a positive impact on the growth of the fluid coupling market through the forecast period of 2018-2026. The escalating utilization of fluid couplings in industries such as cement, chemicals, petrochemicals, power generation, steel and metal processing, pharmaceuticals, food and beverage, packaging and labeling, wastewater management, and others will bring tremendous growth prospects.

This report on the global fluid coupling market provides analysis for the period 2016–2026, wherein 2017 is the base year and the period from 2018 to 2026 is the forecast period. Data for 2016 has been included as historical information. The report covers market dynamics including drivers, restraints, opportunities, trends, and technology advancements that are expected to influence the expansion of the fluid coupling market during the said period. The study provides a comprehensive analysis on market growth throughout the above forecast period in terms of value estimates (US$ Mn) and volume estimates (Thousand Units) across different geographies.

Geographically, the global fluid coupling market is divided into regions such as North America, Europe, Asia Pacific, Middle East &Africa, and South America. The regional fluid coupling markets have been analyzed in terms of value in U.S dollars (US$) and volume in thousand units. Prominent countries profiled in the report include the U.S, Canada, Germany, U.K., France, Italy, China, India, Japan, GCC, South Africa, and Brazil.

The report also includes market share analysis of major players operating in the global fluid coupling market based on their 2017 revenues, competition landscape, which includes competition matrix, and geographical spread. The report benchmarks leading companies on the basis of their capabilities and potential to grow. Factors including R&D focus are attributed to a company’s capabilities, market position, and offerings. Factors including revenue growth, market share, segmental growth, infrastructure facilities, and future outlook are attributed to a company’s’ potential to grow.

The global fluid coupling market is segmented as below: