Flexitanks are bags used to transport large quantities of liquids upto 24,000 liters, in a 20- feet container. They are manufactured in standard sizes, ranging from 10,000 liters to 24,000 liters. They are bags of polymer materials such as polyethylene, polypropylene, PVC coated fabric, etc. usually employed for transportation of non-hazardous liquids such as wine, fruit juices, edible oils, industrial liquids, sweeteners, agricultural liquids, etc. All the liquids that do not fall under the category of dangerous goods as per IMDG code can be transported using flexitanks. Currently, flexitanks are employed for transport of edible liquids such as wine, fruit juices, edible oils, sweeteners, etc. Around 30% of the wine all over the world is transported using flexitanks. Flexitanks are of three types: monolayer, bi-layer, and multilayer. Multilayer flexitanks are the most preferred type owing to their low cost and several advantages. The flexitanks market is anticipated to offer significant potential, especially in the Asia Pacific region. Asia Pacific is one of the leading exporters of liquids such as vegetable oils, aerated & non-aerated beverages, water, industrial and agricultural liquids, etc. due to which Asia Pacific accounted for a major share of the flexitanks market in 2017. 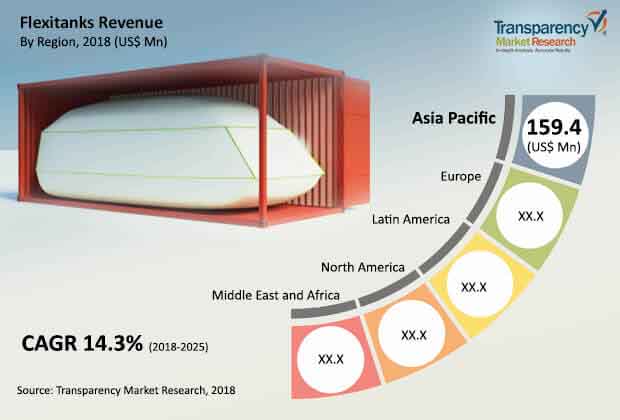 The average cost of a flexitank is much higher than the per unit cost of intermediate bulk container IBCs or drums. However, in case of transport of large quantities of liquids, the overall cost of flexitanks, including operational cost, proves to be more economical than that of its counterparts. A standard 20-feet container is usually chosen to transport bulk quantities of liquids. The 20-feet container accommodates one flexitank with the capacity of 24000 liters. It requires around 18 units to 20 units of IBC tanks and 80 units of drums to transport an equivalent or lesser quantity of liquid in a 20-feet container. The quantity of cargo/liquid that can be transported decreases marginally in IBCs and drums due to the large number of units. The per unit cost of ISO tanks is high. It ranges from around US$ 15,000 to US$ 16,000. Often, ISO tanks are procured on a rental basis, wherein the per day rent of these tanks ranges between US$ 15 and US$ 20. This proves to be high for longer duration journeys. Furthermore, the user has to bear an additional return cost for getting the empty ISO tanks back to the destination. Thus, the overall cost of flexitanks proves to be 30% to 40% lesser compared to that of other bulk packaging products.

Risk of Cargo Loss due to Leakage

Risk of leakage of cargo in flexitanks is higher than that in other bulk packaging carriers. Flexitanks are made up of polyethylene or polypropylene. Chances of damage to the flexitank material are high due to improper or careless handling during loading/unloading. Therefore, utmost care has to be taken while loading and discharging flexitanks in and from containers. These operations can be conducted by operators that provide fitting services of flexitanks into containers. These can also be carried out by flexitank manufacturers with technical expertise and knowhow. Flexitanks are useful in transportation of bulk quantities of products. Hence, they appeal only to users transporting bulk quantities of cargo/liquid. Flexitanks are not feasible for small players transporting less quantities of liquids. An entire quantity of a liquid is stored in a flexitank. Therefore, chances of losing the entire quantity of liquid during a case of contamination is high. This can lead to significant losses.

Increase in Contribution of Developing Regions/Countries in Global Trade

The global trade of edible liquids such as wine, fruit juices, sweeteners, edible oils, potable water, and aerated and non-aerated beverages has increased significantly in the last few years. Developing countries such as Brazil, Indonesia, Thailand, Chile, Argentina, China, India, and South Africa account for a major share of the trade. In case of wine and fruit juices, countries in Latin America and Europe are among the major exporters. Countries in Southeast Asia such as Indonesia, Thailand, and Malaysia hold significant share in terms of trade of edible oils. Brazil, China, and India are also among the major exporters of edible oil. China is one of the key exporters of water for drinking and usage in aerated and non-aerated drinks. Furthermore, the global trade of non-hazardous chemicals such as inks, paints, emulsifiers, latex, fertilizers, and detergents has also been rising since the last few years. Countries in Asia Pacific such as China and India and ASEAN are witnessing rapid industrial expansion. Thus, Asia Pacific also constitutes a prominent share in terms of export of products. Flexitanks prove to be highly economical and useful in case of export of bulk quantities of liquids. This offers lucrative opportunities for flexitank manufacturers in developing regions such as Asia Pacific, Latin America, and South Africa.

In 2018, Qingdao Hengxin Plastic increased its flexitanks production capacity to 200,000 units. The company has been manufacturing flexitanks for more than a decade. It sold around 100,000 units of flexitanks in 2017. In June 2017, Environmental Packaging Technologies (EPT) began expansion of its manufacturing facility in Zeeland, Michigan, the U.S. due to increased customer demand.

In April 2016, Rishi FIBC Pvt. Ltd. expanded by developing a 180,000 sq. ft., full-fledged campus for production of flexitanks along with along bulk packaging products in Mysore, Karnataka, India.

Regions such as Asia Pacific are experiencing major economic and infrastructural development in developing countries such as China, India, Vietnam, and Indonesia etc. Moreover, the region plays a major role in the global trade of edible liquids such as vegetable oils, aerated beverages, water, etc. Asia Pacific accounts for a major portion of global trade. Therefore, Asia accounts for a significant market share of the global flexitanks market. Asia Pacific is followed by Europe, which is among the major producers and exporters of wine.

Flexitanks are polymer bags generally made up of polyethylene and polypropylene, used for transportation of bulk quantities of liquids. Single-use, multilayer flexitanks are among the significantly used types of flexitanks due to several advantages offered by them. Edible liquids such as wine and fruit juices and edible oils such as palm oil, cotton seed oil, coconut oil, crude palm kernel & babassu oil, etc. are heavily exported liquids in flexitanks. Polyethylene forms a major material, by weight, in the overall construction of flexitanks. LLDPE is the polyethylene type primarily used to manufacture flexitanks. All these segments are anticipated to continue to dominate the flexitanks market during the forecast period.

Flexitanks offer several advantages when transporting large quantities of liquids. They prove to be very economical as compared to other alternatives when transporting bulk quantities of liquids in a 20-feet container. Due to this, the demand for flexitanks has been rising significantly in the past few years and is anticipated to continue to rise during the forecast period. Furthermore, the demand for edible liquids and their trade have been increasing significantly, owing to the rise in global population. This is anticipated to drive the flexitanks market.

This report analyzes and forecasts the market for flexitanks at the global and regional level. The market has been forecast based on volume (Units) and revenue (US$ Mn) from 2018 to 2026, considering 2017 as the base year. The study includes drivers and restraints of the global flexitanks market. It also covers impact of these drivers and restraints on demand for flexitanks during the forecast period. The report also highlights opportunities in the flexitanks market at the global and regional level.

The report includes detailed value chain analysis, which provides a comprehensive view of the global flexitanks market. Porter’s Five Forces model for the flexitanks market has also been included to help understand the competitive landscape in the market. The study encompasses market attractiveness analysis, wherein products and application are benchmarked based on their market size, growth rate, and general attractiveness.

The report provides the actual market size of flexitanks for 2017 and estimated market size for 2018, with forecast for the next eight years. The global flexitanks market has been provided in terms of volume and revenue. Market volume has been defined in units and revenue in US$ Mn. Market numbers have been estimated based on product, type, material, and application of flexitanks. Market volume and size have been provided in terms of global, regional, and country level markets.

The global Flexitanks market has been segmented as follows: