FCC Catalyst Market: Key to Bridging the Gap between Supply-Demand

Plant operators are under increasing pressure to increase oil production capacities as global energy demand continues to soar. Fluid catalytic cracking (FCC) remains the preferred method of conversion in oil refineries as it not only produces gasoline with high octane rating but enhances the volume of production. FCC catalysts have been extensively adopted by numerous leading refinery and catalyst companies across the globe.

In its new study, Transparency Market Research (TMR) sheds light on the key trends influencing the FCC catalyst market, including analysis on factors that can influence demand-supply. Considering the evolving nature of the FCC catalyst industry, it is pertinent for stakeholders to understand how subtle developments can lead to massive transformations in the future. 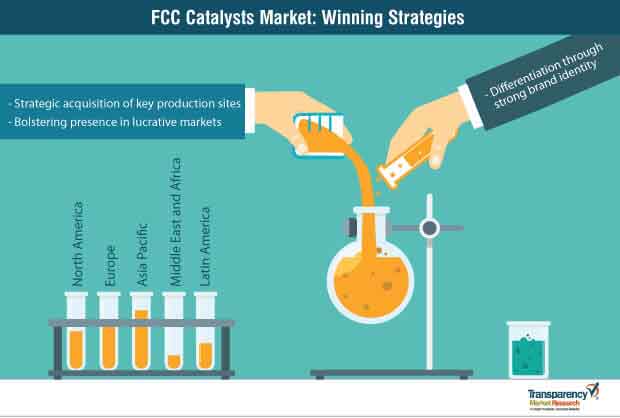 How Growth has Unfolded in the FCC Catalyst Market

The fluid catalytic cracking (FCC) process has been deployed for over 60 years now, and has been incessantly evolving ever since. It has aptly substituted the primitive thermal cracking method, with its ability to produce premium quality gasoline. This technique forms the bedrock for the petroleum industry, since it is extensively used for the production of commodity fuels and platform chemicals.

The Middle East continues to lead the bandwagon of the FCC catalyst market, as a majority of countries in the region are heavily reliant on oil economy. Oil production and sales account for a significant percentage of GDP for Oman, Saudi Arabia, Kuwait, and Bahrain. As a result, demand for FCC catalysts from Middle East has remained significant over the years. Driven by all these factors, Transparency Market Research (TMR) opines that the FCC catalyst market will attain a valuation of over US$ 3,300 Mn by the year 2027.

How Key Trends are Influencing the Strategies of FCC Catalyst Industry

Stakeholders in the FCC catalyst market continue to bank on new product innovation. To do so, they are relying on strategic acquisitions that help them gain an edge in terms of production capacities and new technologies. For instance, in January 2018, Clariant, a giant in specialty chemicals, entered into two key agreements with SINOPEC, a prominent chemical and petroleum company in China. This first agreement will enable Clariant to enhance its catalyst product portfolio to commercially produce low sulfur gasoline. On the other hand, the second agreement offered Clariant Qatar W.L.L. to be a representative of SINOPEC’s FCC catalysts for the oil refineries in Qatar.

Another key trend in the FCC catalyst market on the rise in capital spending in oil and gas industry and petroleum refining activities. Governments are following the capital trail in the industry, and are increasing their capital investments on refining activities. Manufacturers have realized the call for a dynamic capital approach that demands reprocessing non-core assets to increase capital investments. For instance, W. R. Grace & Co. entered in an investment framework agreement with KazMunayGas (KMG), and in Kazakhstan under which it will provide FCC catalysts to KMG’s refineries and also offer investments to construct FCC catalyst laboratory in Kazakhstan. 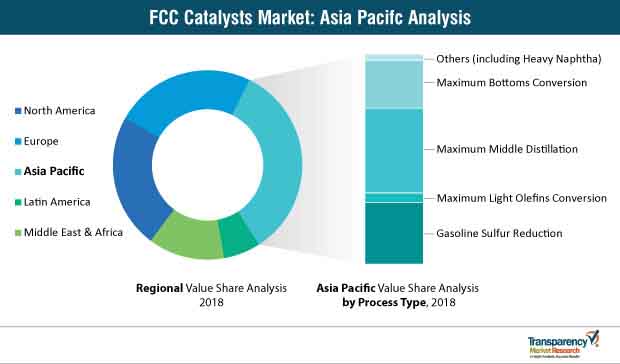 Stuck in a neck-to-neck competition with other brands? Request a custom report on competition on FCC Catalyst Market  here

The FCC catalyst market is witnessing continuous innovation, with maximum middle distillates taking the center stage. The International Maritime Organization (IMO) has mandated ships to switch to low-sulfur fuels. Consequently, refineries are geared to enhance their production capacities for maximum middle distillates. Although there is uncertainty regarding the production of extra IMO-compliant shipping fuels, new regulations have significantly intensified the growth of this segment.

In the past few years, Asia Pacific has emerged as a key region for the growth of the FCC catalyst market, and product innovations have played a significant role in this. A recent development in the Asia Pacific’s FCC catalyst market is the launch of Fortress™ NXT FCC catalyst by BASF which tremendously enhances the output and reduces side reaction. Prominent enterprises in China that are expanding their operations along the oil supply chain are SINOPEC, China National Petroleum Corporation, and China National Offshore Oil Corporation. Moreover, the oil and gas industry in Asia Pacific is gaining traction with as it is a major factor contributing to its GDP growth.

A Glance at the Competitive Landscape

The FCC catalyst market remains highly competitive, characterized by strong expansionist strategies of a number of players. Existing players in the market have established their base by adopting robust marketing strategies, such as creating brand awareness and tapping into regional markets. That being said, new entrants are gradually expanding their footprints by increasing their production capacities and strengthening the product portfolios. However, they may have to contend with a few bottlenecks while climbing the ladder because of the pressing need to meet various government regulations pertaining to the production of chemicals.

Prominent companies in the market own their differentiated brands, which serves as a focal point for suppliers. Moreover, less availability of alternatives enhances the growth prospects of suppliers. On the other hand, buyers in the market may bear the brunt of high costs. This is because the number of oil refineries exceeds the number of manufacturers, thus weakening the bargaining power of buyers. However, they could gain an edge in the market with the better understanding of catalysts.

The top four companies in the market accounted for over 80% of the market share in 2018. Prominent companies in the market, such as WR Grace & Co-Conn and BASF SE, have a strong presence in developing countries such as China, India, and the UAE. This is because there is an easy accessibility to raw materials in these regions, thus reducing the outsourcing and transportation costs.

New product innovations and technological developments have circumvented the growth of the FCC catalyst market’s growth. The industry derives strength from the high demand for fuels and the expansion of refinery capacities. There has been a paradigm shift towards cleaner fuels, which is also a result of the regulatory framework laid down pertaining to the use of chemicals. This has filliped the sales of FCC catalysts in the commercial and industrial sectors.

Rising industrialization across the globe has supported the growth of the oil and gas sector. It has led to a subsequent rise in crude oil activities. This has translated into the market growing as a stable business for the importers and exporters of crude oil. Report authors are of the strong opinion that, in the near future, the market is bound to witness tremendous growth, as the demand for synthetic zeolites has gained remarkable momentum.

What are the Key Questions Answered in TMR’s FCC Catalyst Market Report?

TMR’s study provides detailed information about the market dynamics of the FCC catalyst market based on the strategic developments and opportunities in the prominent regions that contribute toward fortifying market growth. The statistics and information provided in the FCC catalyst market report answers significant questions that help key enterprises expand their precincts in the market. A few of these questions are listed below:

To gather pertinent information about current market trends, analysts have interviewed leading stakeholders and the CEOs of prominent companies in the FCC catalyst market. This information collected from the primary sources acted as a valid source to determine the growth prospects and challenges in the market. These industry experts also helped the analysts acquire vital information pertaining to the investment strategies, mergers and acquisitions, and strategic collaborations in the FCC catalyst market.

To support the information gathered from primary sources, analysts derived information from reliable secondary sources. The secondary sources used to formulate the report on the FCC catalyst market include the U.S. Geological Survey, World Bank Commodity Price Data (The Pink Sheet), OPEC Annual Statistical Bulletin, and others. This information has helped in assessing significant market figures, such as the volume of sales and the revenue generated from each application.

TMR’s report provides information about the revenue generated from each segment based on regional and global markets. It offers insights on the demand-supply trend and pricing analysis, along with the value share analysis of each segment in the FCC catalyst market.