Peat is being used since the 17th century, majorly as an energy fuel until a few years ago, and continues to be used across a number of application areas. Peat finds applications in the horticulture and agriculture sectors owing to its rich organic properties, providing excellent aeration and moisture when used with soil. However, rising environmental concerns and concerns related to commercial rate of extraction of peat have started to significantly diminish the growth opportunities of the overall market for peat across the globe.

In Europe, which is the world’s leading consumer of the organic matter, the demand for peat has been sluggish over the years and continues to remain slow. Countries in the region that relied on peat as an energy fuel for their national energy demand have cut down on their peat consumption to more than 50% and are expected to further bring the volumes down in the near future. Transparency Market Research estimates that the Europe market for peat will exhibit a meagre 0.6% CAGR over the period between 2016 and 2024, generating a revenue opportunity of US$2.13 bn by 2024, only a slight rise from US$2.05 bn in 2015. 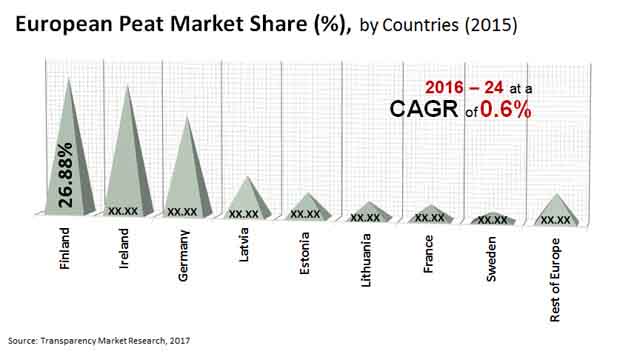 In terms of type, the report segments the Europe peat market into sapric, hemic, and fibric. Of these, the segment of hemic peat dominated the Europe peat market in 2015, accounting for over 45% of the overall market. Hemic is a partially decomposed organic material and often has the look and feel of mature compost. Hemic material has rubbed fiber content of 17% to 40%. The segment is anticipated to retain its dominance over the report’s forecast period as well, owing to the vast usage of this variety of peat in horticulture and agriculture sectors.

The segment of sapric peat closely followed hemic peat in 2015 and is expected to retain its position over the report’s forecast period as well, exhibiting a 0.5% CAGR from 2016 to 2024. The segment of fibric peat is expected to be the least promising product segment over the forecast period, exhibiting a mere 0.1% CAGR from 2016 to 2024. Fibric peat can replace many natural fibres in sustainable manner without having to produce fibre corps on agricultural land. Peat as a fibre helps conserve wood as a fibre for other uses. Fibric Peat possess many anti-bacterial properties, excellent moisture and tolerance. However, the increased inclination of consumers towards other alternatives is expected to drastically affect the overall consumption of fibric peat in Europe over the said period.

In terms of volume, Finland is the largest producers and one of the leading consumers of peat in Europe as its geographical location and climatic conditions favor maximum peat production. Finland is expected to will continue its current consumption trend with a sluggish growth during the forecast period. The country has many power plants and central district heating boilers fueled with peat in addition to other substitutes as wood and biomass.

Sweden, Germany, and Ireland are also key contributors of revenue to the Europe peat market, with Sweden possessing extensive peat resources that are expected to last hundreds of years when present production rates are considered. While most other countries possess low volumes of resources, the volume is considerably higher as compared to the usage pattern of present times in countries such as Latvia and Lithuania.

Rising concerns regarding the environmental effects of using conventional fossil fuels to generate power have resulted in increased efforts to make renewable energy sources available and easily accessible. Growing reputation of peat as a good source of renewable energy is anticipated to favor the development of the global peat market in near future. Various governments around the world have started promoting and in some way enforcing the usage of energy derived or generated through renewable energy sources. This has resulted in increase in the popularity of alternative fuel and energy sources such as solar, wind, and bio-gas. Players and manufacturers in the global peat market re developing various bio-based peat products to meet the rising demand for bio-fuels. This trend is expected to favor the upward trajectory of global peat market in coming years. Growing global population is directly responsible for the growing need for electricity generation. Integration of bio fuel energy generation technologies in electricity generation can provide attractive opportunities for the stakeholders in the global peat market.

The Europe Peat market has been segmented as follows:

What is the Europe Peat Market Size?

What is the CAGR for Europe Peat Market?

Europe Peat Market is estimated to rise at a CAGR of 0.6% during forecast period

What are the key factors driving the growth of Europe Peat Market?

Who are the key players in the Europe Peat Market?

What are the end-use segments in the Europe Peat Market?