The global market for ethoxyquin has been witnessing a significant upsurge in its size and valuation, thanks to the increased pet adoption across the world. Since ethoxyquin, as a preservative, is highly efficient in slowing down the oxidation of carotene, xanthophyll, and vitamin A and vitamin E in pet food products, to ensure long shelf-life, its demand is rising substantially with the augmenting need for pet food products, reflecting greatly on the overall market. 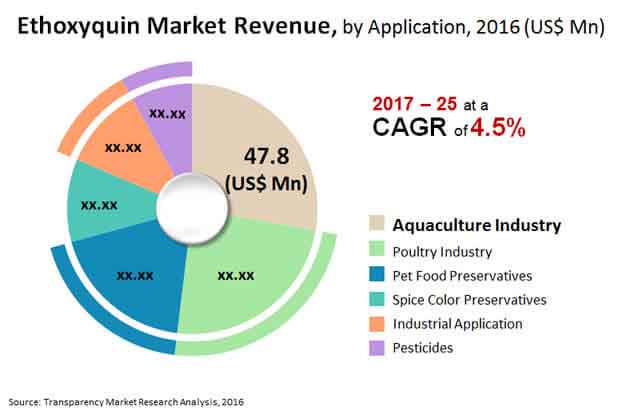 Ethoxyquin finds a widespread usage in the poultry industry, pesticides, pet food preservatives, spice color preservatives, industrial applications, and the aquaculture sector. The demand for ethoxyquin has been significantly high in the aquaculture industry and is expected to witness a remarkable upsurge in the years to come, owing to the increasing demand for fish and fishmeal products in emerging economies. Apart from this, the poultry industry is also anticipated to report healthy growth in the demand for ethoxyquin in the near future due to the rise in the poultry consumption.

North America to Retain its Dominance

The worldwide market for ethoxyquin is spread across Asia Pacific, the Middle East and Africa, North America, Latin America, and Europe. With a share of nearly 30%, North America led the global market in 2016. Researchers anticipate the regional market to remain dominant over the forthcoming years. The FDA approval for the usage of ethoxyquin in animal feed has propelled the market for ethoxyquin in North America. Over the coming years, the increasing consumption of ethoxyquin-95, especially in the aquaculture industry, is likely to boost this regional market substantially.

The report talks about the market share of total ethoxyquin market by different application segment including pesticides, pet food preservatives, poultry industry, aquaculture industry, spice color preservatives, industrial application. A section of the report highlights ethoxyquin demand, region-wise. It provides a market outlook for 2017–2025. This study discusses key trends contributing to growth of the ethoxyquin market globally, as well as analyses the degree to which drivers are influencing the market in each region. Key regions assessed in this report include North America, Latin America, Europe, Asia Pacific (APAC) and Middle East and Africa (MEA).

In the final section of the report, a competitive landscape has been included to provide report audiences with a dashboard view. Detailed profiles of the providers are also included in the scope of the report to evaluate their long-term and short-term strategies, key offerings and recent developments in the ethoxyquin space.

The global ethoxyquin market is segmented into: