The exploration for renewable resources, certain requirements by specific ethnic communities, and rising environmental concerns have propelled the interest in utilizing plant-based raw materials for production of household consumer products. Demand for fabric softeners, a luxury product category, has increased manifold, with cationic surfactants being the major ingredient in these products. With the advent of advanced washing machines, which have distinctive automatic dispensers for fabric softener and detergent, demand for effective softeners that impart fragrance, softness, and ease of ironing to the laundry has surged significantly.

Esterquats are cationic surfactants, increasingly utilized in light of their excellent biodegradability and softening effect compared to conventional quats. Albeit conventional quats deliver excellent softening performance, poor biodegradability of these quats coupled with stringent environmental regulations have curbed their adoption. This has further made esterquats the surfactant of choice among softener producers across the globe. With vegetable-based raw materials gaining worldwide acceptance over their animal-based counterparts, a new market niche has been created for fabric softeners, thereby stoking demand for esterquats. 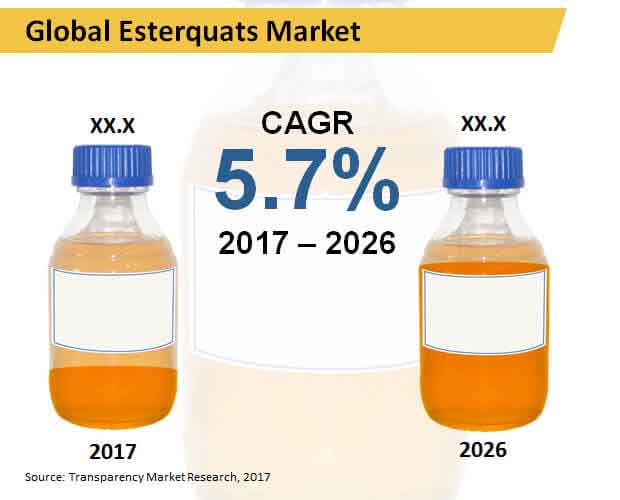 A recently composed research report of Transparency Market Research envisaged the global esterquats market to reflect an above-average expansion in the period of forecast (2017-2026). Revenues from global sales of esterquats are poised to reach roughly US$ 3,400 Mn by 2026-end. Textile industry is considered to be a major market for esterquats, as the industry is the global leading consumer of fabric softeners. Apart from fabric care applications, esterquats seek high usage in hair conditioners as anti-static in polymers, as well as in sanitizer products.

There has been a surge in awareness about utilization of chemicals as fabric softeners, which help in maintaining texture and quality of fabrics. However these chemicals have been associated with several health effects such as irritation to skin and respiratory tract. This has further spurred use of plant-based raw materials in fabric softeners, which in turn is driving demand for esterquats. Growing penetration of technologically advanced washing machines, coupled with increasing purchasing power and changing lifestyles of consumers will also have a positive influence on demand for esterquats. Fabric care products are likely to prevail as the largest application of esterquats, in terms of revenue.

Asia-Pacific excluding Japan (APEJ) will continue to endure as the fast-expanding as well as the largest market for esterquats, driven majorly by growing awareness and acceptance among consumers regarding use of environment-friendly products such as esterquats in manufacturing of fabric care and personal care products. Major manufacturers in APEJ are increasing focusing on the expansion of their plant capacities. Key companies such as Akzo Nobel are engaged in the capacity expansions for catering rapidly growing demand for esterquats in industrial applications.

Although liquid esterquats will continue account for relatively larger revenue share of the market based on form, dry esterquats will witness the fastest sales expansion through 2026.

Expansion of distribution channels has remained a key strategy employed by the players in the global esterquats market. A large number of industries are making investments for development of technologically advanced products. Extensive research & development efforts are being taken by esterquats manufacturers for enhancing the product’s efficacy and quality. Leading market players are entering into collaboration for developing novel products at competitive prices. For example, BASF collaborated with Solazyme Inc. for the development of first commercial surfactant based on micro-algae oil for home and personal care applications.

Biodegradability of esterquats has made them a potential ingredient in the production of car washing products. Esterquats have gained tremendous momentum with their ability of improving aesthetics and extending lifespan of cars through their anti-corrosion and anti-rust properties. Growing hair care sector is one of the key growth determinant for the global esterquats market. This is primarily because of growing consumer demand for environment-friendly products with regard to beauty and health. Mounting demand for scented and high-performance fabric softeners will further augment adoption of esterquats significantly.

Transparency Market Research’ new insightful analysis on the global esterquats market is an exhaustive report, which traces future demand evolution of esterquats. This analytical study delivers intelligence on the way global esterquats market will witness expansion in the forecast period, 2017 to 2026. Information issued in this elucidates latest trends impacting the market growth, and addresses objective concerns of companies producing esterquats.

Constant discussions carried out by the analysts at TMR with companies producing esterquats has enabled provision of actionable insights on the market. Influence of effective & innovative production technologies, mandatory manufacturing regulations & standards, and emerging end users has been reflected across all research findings of this report. Overall market size, and revenue shares of key market segments included in the study, are among key considerations used for interpreting and quantifying data gleaned from primary and secondary researches.

A robust research methodology employed by TMR’s analysts has enabled them in procuring information from authentic databases and the market participants, which in turn is aggregated and streamlined. The information obtained has then been leveraged for generating a baseline for the market size evaluation, segmentation values, and estimations on the regional market sizes. The report further imparts a first-hand information on lucrative and sluggish marketplaces across the globe by branching the esterquats market into key regional segments. Report readers can capitalize on this information for expanding their footprint in the global market.

A key benefit of using the research analysis offered in the report is that readers can gain better understanding on the competition landscape of the global esterquats market. Taking into consideration how companies producing esterquats are seeking aid in extracting information about their competitors and learning about their growth strategies, the competition landscape chapter of this report is valuable for key players operating in the market.

From leading players to emerging companies, intelligence issued in this chapter of the report unveils latest strategies as well as current conditions of the market players. Scope of TMR’s report on the global market for esterquats is to enable the readers to make informed decisions on future direction of their businesses. The report promises great assistance to companies focusing on the expansion of their presence in the global esterquats market in the foreseeable future.

The report also offers detailed forecast on the market based on a segmentation analysis, which provides readers with deep understanding on sluggish as well as lucrative avenues for the esterquats market. The report segments the global esterquats market across an array of regions and segments viz. form, and application.